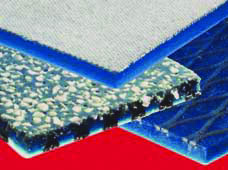 Tandem Products’ durable liners save time and money for users

According to Mike Claussen, territory manager (800-533-0509), “Rhino Hyde® liners are continually field tested and have lasted over 1 billion bushels of corn and soybeans in some of the most severe applications.

“Rhino Hyde® Standard Blue and High Energy Orange liners are available in thicknesses from 1/4 inch to 1 inch and come in 4-ft.-x-10-ft. sheets, as well as custom-sized sheets and rolls with various backings.

Here are what some users of Rhino Hyde urethane liners have to say:

“I’ve been using Tandem’s Rhino Hyde® products since I started in the industry in the early 1980s. I was working as a laborer at a river terminal in St. Paul, MN and was involved in removing the original AR plate from spouting and replacing the lining with Rhino Hyde® Standard Blue urethane. Since Tandem introduced the High Energy Orange urethane liner, we have been using that product more and more. We also use Tandem level sensors in all of our bins and surge hoppers.

“We currently use Rhino Hyde® High Energy Orange for most of our lining. We still use the Standard Blue liner as well, but we found that the High Energy Orange best fits our overall needs at a good price. The product is very easy to work with, as the pliability allows us to easily maneuver into tight areas. And there are no maintenance issues to speak of – the product works great. We were very happy from an installation standpoint, because it is much easier to install than if we would have had to replace the lining with steel.”

“I would say it’s been 20 years since we started using Rhino Hyde® products. We started off with the Standard Blue urethane and eventually transitioned over to the High Energy Orange sheets, which we use almost exclusively now at our facility that handles corn and soybeans. We use Rhino Hyde® liners in all high-impact areas – head sections of legs and conveyors, any areas that have high wear.

“The reason we chose Tandem’s products is because the liners we were using required too much time and labor to change them all the time.

“Then, we tried Rhino Hyde® Standard Blue, and it wears well, but when they came out with the Rhino Hyde® High Energy Orange and convinced me to try that, I haven’t looked back. We’ve been using the Orange and their ceramic liner. They perform very well.

“Rhino Hyde® definitely saves us manpower hours. It doesn’t have to be changed anywhere near as often as some of the other liners out there. We have a lot of high-wear areas where we were getting two or three years wear out of the Standard Blue liner, and with the Orange, it looks like it’s going to last five or six years, maybe even longer than that. The High Energy Orange may be a little more expensive than the Standard Blue, but I think it pays off in fewer maintenance hours, and that’s part of the reason why I recommend it. If you can cut down on the amount of time you need people working inside of spouts, it pays large dividends.”

“Back in 1978, I started working at a river terminal for CHS in St. Paul. That was where I had my first exposure to Rhino Hyde®.

“We used them in high-wear areas for spouting. At that time, they were basically the only urethane product that I knew of.

“The Rhino Hyde® products performed up to any expectations – they work really well under tough conditions.

“I believe that by using the Rhino Hyde® product there’s a savings on labor. If you put the urethane in the spout vs. a steel product, for example, it outlasts steel. It just slides better and wears very well. If you have a spout that sees any kind of volume, there’s definitely cost savings in the long term by using this product.”