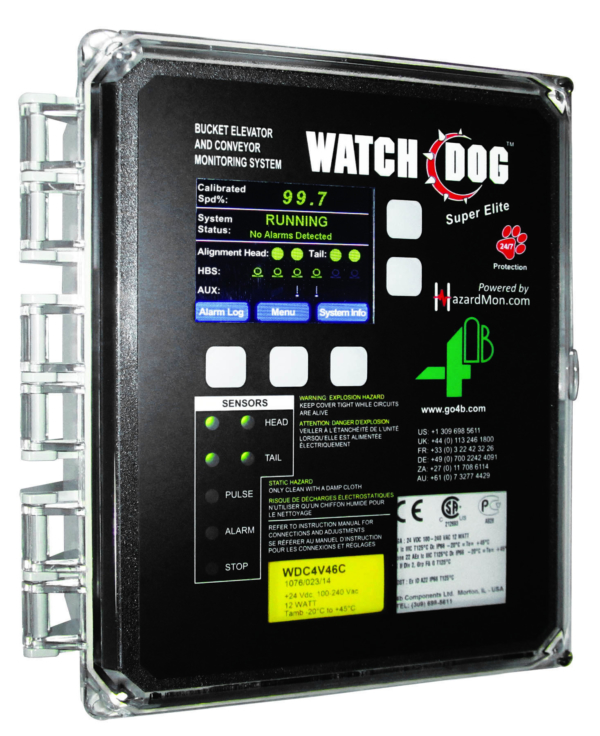 “When a problem is detected, it will sound an alarm and provide shutdown control of the elevator/conveyor and feeding system,” he explains.

Here are what some users of the Watchdog Super Elite monitoring system have to say:

“We first installed the Watchdog system at our elevator in Chase, KS. We were looking for a unit that was self sustaining and reasonably priced. In my career, I’ve worked with several different types of units from different companies, and I’ve found the Watchdog sensors to be some of the most reliable. 4B’s Whirligig sensor is very reliable, and that’s what led me to the Watchdog system.

“A big part of it was that I wanted something that wouldn’t give false alarms. Because if you’re an operator and you get false alarms and you don’t feel like you can trust that unit, it really takes a lot of the value away. We know we can trust the Watchdog system. If there is an alarm, we trust that it’s legitimate, and we address the issue rather than think, ‘Oh, it’s just another false alarm.’ We do not want a single incidence of that.

“Another thing I really like is the cloud-based service software. At each of our facilities, we have only two to three employees, and they may be doing fertilizer or other jobs at different parts of the property. So, if they’re working upstairs, I want someone to be able to hear or see the alarm.

“With the cloud software, we’re putting computer screens in our office so everyone can see them. That way, they’re able to tell if there’s an alarm going off at the elevator and radio the employees to let them know where the problem is.

“The biggest benefit I’ve seen has been the consistency. It’s run virtually maintenance free, other than the testing we do regularly to make sure it’s accurate, which we haven’t had a problem with.”

“We started using 4B’s Watchdog system about two years ago. We’ve added a few every year since.

“One of the leading causes of downtime for a feed mill is bearings failing or equipment breaking down, and on a roller mill, particularly, the bearings are the most likely place for a failure, due to either not greasing properly or contamination from the environment. By using the Watchdog, it gives us an earlier indication of when something could be wrong. This proactive response is where we see the advantages, because we don’t have complete failures and the downtime that comes with them. This allows customers to kind of nurse it along until they can afford to be shut down or our service group can replace a bearing.

“The biggest benefit of using the Watchdog system is the early identifier of when a bearing is starting to go out. On the systems that do have the Watchdog system, we’ve caught a handful of early warnings – maybe six to 10 times personally and by our techs who are able to watch it when they have an internet connection – and then notified the customer. and they can address the issue. It maybe just needs to be greased or maybe it actually is failing and they can help us determine the problem. These early indications help us eliminate as much downtime as possible. In fact, about a year ago, we added email and text message alerts to service and maintenance crews. Since then, customers are more easily able to identify when problems occur and respond to them quickly.

“Overall, the Watchdog system is really robust, designed very well, and web-based – you’re able to access pretty much anything on a phone, desktop computer, laptop, or tablet.

“The group at 4B is really customer-oriented as well. They do a good job any time we have questions or issues. They’re on top of things right away and have helped us solve any issues promptly. From a performance side, we haven’t had any issues at all.

“I absolutely would recommend the Watchdog system. The biggest part of running a business is making sure that you’re up and running, because when you’re down and unable to produce what your customers are requesting, you’re really hurting their business, which then hurts your business.”

“We installed our Watchdog systems in spring 2016. We went with 4B, because we have some of their older models of the Watchdog, and I wanted to keep as much similar looking equipment for the maintenance team as possible. I’ve worked with 4B before on previous projects, and just knowing the network and seeing the 4B equipment we had onsite, it was an obvious choice. A big part of the decision was that it has Modbus communication, which works with our existing Allen Bradley PLC.

“The initial benefit was during construction. We used them so that we could install our Watchdog system near a conveyor; then, all the hazard monitoring equipment, proxy switches, speed sensors, and bearing temperature sensors were wired to the Watchdog units. As a result, electrical installation was simplified. Then we do a pre-startup safety check, and because we use this Modbus protocol, I was able to bring as much information to the DCS as I wanted. So, when we went through a pre-startup safety review, we could have people trip a sensor and visually verify through the DCS that the system is working correctly.

“Now that we’ve been running for a while, we’re happy with the communications and getting all that information. We run a control room where all the information comes through, so if they get the trip on a Watchdog, they know exactly what it is, and they can relay that information to the maintenance team. On our older style of the Watchdog, it told you there was problem but not what type of problem. Now, it tells you, for example, if you have a hot bearing.

“I also like working with 4B. They are responsive to suggestions. We had one issue come up this winter with the temperature of one of the bearings in negative temperatures. I called 4B and explained the issue. They did some testing, and I believe they confirmed the issue and then fixed it in a firmware update. So when the process allows a short outage for upgrading, they’ll deliver those firmware updates, which is another nice thing about these Watchdog systems: You update them with just an SD card. It’s really easy.”

About 4B Components Ltd.