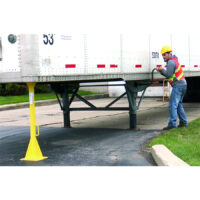 “Most semi-trailers dropped off at loading docks stand about 45 inches from the nose to the ground, and shippers rarely need to adjust the nose heights,” says Aldon President Joe Ornig.

“The exception is perhaps to free jacks stuck under a heavy load, but even then the adjustment is no more than an inch at most.”

“Instead of adjusting the stabilizer to the height of the trailer, shippers can use the landing leg handle to adjust the trailer to the GUARDIAN stabilizer. In low gear, a worker can easily crank the nose up or down one inch in less than a minute,” adds Ornig.

“The result is a stabilizer of high load capacity and extremely lightweight, with no screw to rust or jam.”