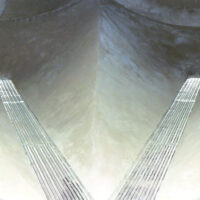 The KANALSYSTEM™ bin unloading and aeration system is designed for safe, zero-entry bin cleanout and uniform airflow throughout the grain mass.

According to Sales Engineer Keith Locklin, “the KANALSYSTEM is dual-function – it works efficiently in nearly any size bin for both unloading and aeration.”

“The KANALSYSTEM is self-cleaning and has no mechanical parts,” Locklin says, “so a sweep auger is not needed, and staff do not need to enter the bin during unloading.”

Locklin adds that the system can unload up to 40,000 bph for nearly any whole grain, including wheat, corn, and soybeans.

Aeration is supplied from a system of canals with directional perforated decking beneath the bin floor.

“Concrete ridges are formed between the canals at the angle required for the grain to flow to outlet gates,” he explains. “Fans and ductwork are installed on the outside of the bin, pushing air into the canals and through the decking to provide uniform airflow.”