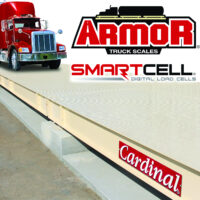 “Our new ARMOR series digital truck scales with SmartCell load cells offer unmatched performance and are built to last a lifetime of heavy-duty weighing use,” he says.

“Every facet of the digital truck scale weighbridge and electronics has been built specifically for long-lasting endurance, minimal upkeep, and IoT monitoring convenience.”

“Each waterproof stainless steel digital load cell is encapsulated completely and filled with a potting compound to fill all internal voids and prevent any potential for moisture entering the load cell and causing premature failure,” Sabo adds.