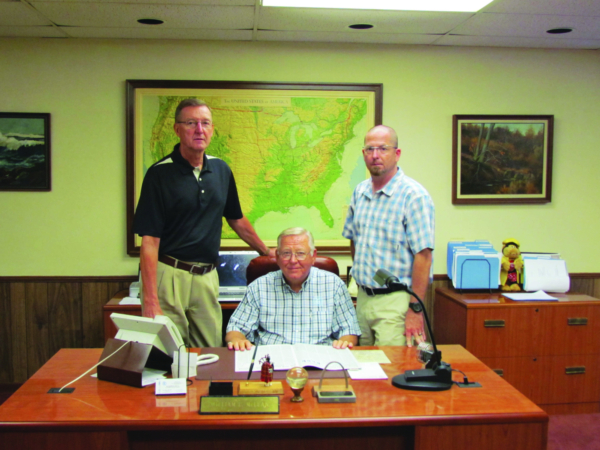 Quality manufacturing and customer service since 1878

The Essmueller Company has been a family-owned business since its 1878 beginning in St. Louis, MO, with Fred Essmueller as cofounder. Many things have changed over the years, including transfer of ownership to the McLean family in 1965, but the company’s dedication to both customers and employees has remained strong for 133 years.

Current President and CEO William “Bill” McLean and his wife, Patricia, purchased the company in 1986 from his father and other investors. Patricia served as CFO until retiring in 2009.

“For a little over 20 years, Patricia and I worked together in the business, which was a very good situation,” says Bill McLean. “I trusted that the person handling the money was making every decision to benefit the company, and she knew that I was doing all that I could for the company’s success. But neither of us wanted the other’s job!”

When Bill McLean turns 70 in just over three years, he plans to step back as president and pass the torch to son Matthew who has been with the company for 13 years, currently serving as vice president of operations.

“I don’t plan to retire,” explains Bill, “just step to chairman of the board and play more golf! Matthew will be 42 then, the same age I was when we bought the company. As vice president of operations, he already has the toughest job, coordinating all the parts of the business and dealing with everyone. It’s hard for me to turn loose, but it will be time. In a family-owned business, it becomes a passion to succeed, and you put in the extra effort to make it happen.”

Cofounder Fred Essmueller emigrated from Germany in 1865 and worked as a millwright for I.Q. Halteman & Company specializing in the ground-up construction and renovation of flour mills along the Mississippi River. Between 1878 and 1899, he formed and dissolved several business partnerships.

In 1899, with the help of his son, Will, he renamed the business “Essmueller Mill Furnishings Company,” which was changed in 1941 to the current “The Essmueller Company.”

The company operated as a “job shop,” machining and fabricating one-of-a-kind equipment for mills, concentrating its on-site work to locations around St. Louis and Kansas City, MO where its two facilities were located.

“A lot of our business for many years was building special machinery, for example bottling machines, for businesses near St. Louis – including Anheuser Busch, Ralston Purina, and Monsanto,” says McLean. “Ralston Purina approached us and asked us to build a round-bottom drag conveyer just for them, which we did for 20 years, until they underwent a lot of changes, and we were outbid.” c

In 1965, Arthur F. Essmueller, the last company owner from the Essmueller family, retired. Robert H. McLean, then president, and three other officers purchased the company. Under Robert McLean’s leadership, the focus on “job shop” production was reduced, the company initiated a standard line of material handling equipment, and its facility in Kansas City was closed. But, as today, the company retained its capability to make products especially tailored to meet the needs of customers.

With a product line of turnhead distributors, bucket elevators, and the round bottom drag-flight conveyor, The Essmueller Company grew, and new plants were opened in Walnut Ridge, AR and Laurel, MS.

“By the early 1980s, one magazine reported that we were manufacturing 86% of all round bottom drag-flight conveyors for the feed industry in the United States," says McLean. "The conveyors, which were our bread and butter product and our specialty, were produced in Laurel, making it our most profitable facility."

The Effect of PIK

In 1983, the government started the Payment In Kind (PIK) program to reduce the amount of stored grain in the country. “Prior to 1983, the government bought up grain and paid people to store it, which benefitted our company, since every little town had a storage facility and needed equipment,” explains McLean. “The PIK program gave farmers stored grain to sell, if they agreed not to grow new crops for three years. Our business was instantly cut at least in half, and other companies were affected even more, especially those that were family-owned.”

The company’s cash value was weakened, and most of its board members decided to retire, so in 1986, William and Patricia McLean purchased the company. Soon after, they closed the facility in St. Louis and moved the home office to Laurel.

“When we bought the company, we were concerned about what would happen, but we also knew what the Laurel plant was capable of, as it had been supporting the rest of the company,” says McLean. “Luckily for us, about three weeks after the purchase, business went back to the level before PIK and has been going well ever since. In 1988, we had expanded the capacity at Laurel enough to allow us to close the Arkansas facility and produce everything from Laurel.”

The Laurel plant was built in 1971, and drag conveyor started shipping out in 1972. Today, 120 employees work from the 190,000-sq.-ft. facility, which houses office and manufacturing space. Equipment is shipped throughout the United States and to more than 20 countries.

“I wish that my father, who retired in 1979 and died in 2008, could see the company now,” says McLean. “It’s a lot bigger and stronger and has more business than ever thought possible.

“A lot of the credit goes to our great employees. We have many employees who have been here for 20 or 30 years, and some started when I did. Our whole operation has a family feel, and we don’t make any decisions without considering how it affects people. If it hurts people more than it helps the company, we don’t do it. Owning a company means that you also take responsibility for your employees trying to make sure they have a job and can feed their families.”

“Key factors to success are quality and customer satisfaction,” continues McLean. “It’s a basic that you have to have a quality piece of equipment, in order to have return business. Guaranteeing satisfaction comes from never letting problems sit. You do what you have to do to make the customer happy – you don’t let someone go to bed mad at you. If we can’t handle an issue over the phone, we have service technicians that go anywhere they are needed.

“It’s a difficult market today, especially with all the rules and regulations that must be followed. We have focused on what we do best realizing that we can’t be all things to all people. Occasionally, we have added a new product, but we concentrate on doing what we do in the best way we can.

“We aren’t always the cheapest, but we have quality products and work hard to solve the needs of our customers. That is what keeps you in business.”

The company’s website includes a lot of information and has brought in new customers, many from outside the United States. The website is currently being revamped to make it easier to navigate.

“We have been shipping into new countries because of our website,” says McLean. “People especially like seeing how our equipment moves and what c it is used for.

“We aren’t big enough to travel the world looking for business, but people are finding us and we’ve picked up repeat customers who are using our equipment or selling it in their countries.”

McLean is very proud to report that the company is right at two years without a lost-time accident. “Safety is a big push for us,” he says. “We hired J.W. Safety 20 years ago to come in to do training and make sure we are up to date with OSHA and EPA requirements.

“I tell employees that if they are hurt they can’t feed their family, and we need them. Our people are our most important asset!”