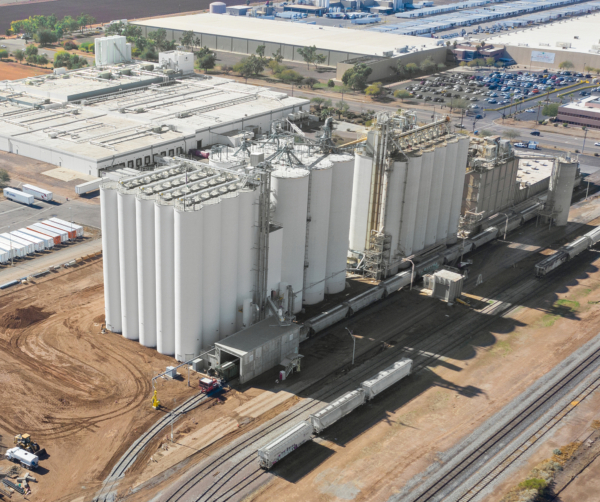 As Bay State Milling Company rolls out its new HealthSense® high-fiber flour products, derived from a group of high-fiber wheat varieties, the privately-held company needed a place to store those varieties to preserve their identity.

“This is not a commodity wheat that can be stored conventionally,” says Project Engineer Drew Teigland, who has been with Bay State for nearly three years after nine years in the milling industry.

“Bay State partners with farmers to grow these varieties, which we then own and store until needed.”

To meet this need, Bay State selected its flour mill at Tolleson, AZ (623-936-8400), about 25 miles west of Phoenix, AZ, to add 1 million bushels of slipform concrete wheat storage to the facility’s existing 1.6 million.

“We selected McCormick due to their industry knowhow and the trust we have built with them over previous years of projects together,” Teigland says.

“That selection proved to be even more important this year with COVID-19, as we needed to fully trust the work that was being performed, as the normal client/contractor onsite interaction was much more limited. They exceeded expectations.”

Also taking extensive part in the project were VAA, LLC, Plymouth, MN, which developed bid specifications, drew up preliminary contracts, and did structural engineering, and Knobelsdorff Enterprises, Goodhue, MN, which served as electrical and automation contractor.

Bay State broke ground on the grain annex in January 2020, and the facility began receiving wheat in December.

The grain elevator addition at Tolleson consisted of 40 storage tanks – 24 round hopper tanks and 16 interstices – a section dedicated to a receiving bulkweigher and cleaner, and a three-hopper rail and truck receiving building.

The big hopper tanks stand 21-1/2 feet in diameter and 129 feet tall. Each has a steel hopper bottom at a 45-degree slope.

Since turnaround will be fast, none of the slipform tanks are equipped with either aeration or grain temperature monitoring.

In the receiving shed adjacent to the elevator annex, Bay State receives wheat at 10,000 bph via both rail and truck, with the bulk of the volume coming by rail. Handling equipment for incoming wheat is set at 10,000 bph.

The pit hoppers empty onto a 10,000-bph AGI Tramco drag conveyor, which feeds another AGI Tramco incline drag. This, in turn, feeds a Schlagel 10,000-bph leg equipped with a single row of Maxi-Lift 16x8 TigerTuff buckets mounted on a 17-inch Continental belt.

From the bulkweigher, wheat is sent to one of four 3,800-bushel surge bins. The operator has the option of sending grain from the surge bins to an AGI Tramco loadout drag for loading rail or truck.

The primary route from the surge bins, however, is to a Bühler TAS precleaner. “The intent of the Bühler cleaner,” says Teigland, “is to remove anything significantly larger, smaller, or lighter than wheat. We will likely only be removing 0.5 to 1% of the impurities in the process, but we are conditioning the wheat so it is more stable and consistent in storage.”

From the cleaner, wheat is sent to an AGI Tramco cross-conveyor and up a Schlagel cleaning leg to rooftop drags to storage.

Storage tanks empty onto AGI Tramco drags for transport into the mill. Near-infrared (NIR) data are used in a recipe system to blend wheat on the go using a set of 44 Bühler flow balancers.

Data is supplied by in-line ProFoss NIR testers located just before the bulkweigher and on reclaim from storage when blending into the mill. The units read moisture, protein, amylose, and total dietary fiber.

“Each railcar and truck is analyzed continually and data recorded every 15 seconds,” Teigland explains, “which will give us a great composite sample as opposed to a grab sample.

"This sets us up better for when we ultimately blend wheat with our recipe system. The reclaim NIR automatically adjusts flow out of the tanks to target total dietary fiber, which will allow the most consistent product for our customers.”

“We’re very happy with the features and operation of the new elevator,” Teigland says, “and we are excited to grow the HealthSense® high-fiber flour offering for our customers and communities.”

From the First Quarter 2021 MILLING JOURNAL