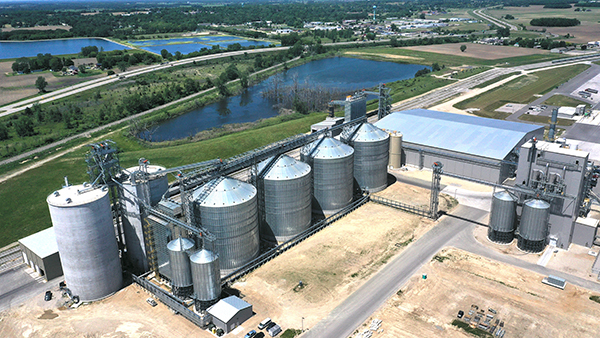 The site had been intended for an ethanol plant that never happened. Some infrastructure was in place, however, including foundations for two concrete tanks, stainless steel tanks, a fire suppression system, underground electrical, an office building, and some railroad tracks and roadways.

Today, however, that site is home to a huge, bustling soybean handling and processing operation. On one side of the property, a brand new 4.5-million-bushel steel and concrete elevator began taking in soybeans after the 2019 harvest.

Next to it, opening in February 2020, a soy processing plant can turn 45 million bushels of soybeans a year into high-protein soybean meal; pelleted and unpelleted soy hulls; and degummed soybean oil.

ZFS Ithaca, LLC is the third soybean processing operation for the Meeuwsen family based in Zeeland, MI, in the southwest part of the state, each operated as a separate business entity.

The Meeuwsen family business started in 1950 as a trucking operation.

The family got into the soy processing business in 1996, when it built a plant adjacent to its grain elevator in Zeeland.

At the time, no one was processing soybeans for Michigan producers, who had to send their beans out of state. Later, the family acquired a soy plant in Creston, IA in 2018 from CHS.

“The Michigan market for soybean meal has been growing year after year,” says ZFS Ithaca General Manager Eric Meeuwsen, who has been active in the family business for his entire career. “We just couldn’t supply the entire market from the Zeeland plant, and Creston was too far away.”

The flat, fertile fields in central Michigan seemed an ideal place to source more soybeans in-state, and the site in Ithaca already had the start of an infrastructure in place.

It also had access to a four-lane highway and the Great Lakes Central Railroad, a short-line with connections to the three Class I railroads – Canadian National at Durand, MI; CSX at Howell, MI; and Norfolk Southern at Ann Arbor, MI.

ZFS Ithaca took bids on construction of the grain elevator and awarded the construction contract to Jackson Industrial Construction, Concord, MI (517-524-8589). “They did a good job for us,” says Meeuwsen. “They knew what we wanted, and we’ve built up a relationship.”

The concrete tanks are equipped with flat floors and 12-inch Springland sweep augers. A set of four Caldwell 50-hp fans supply 1/14 cfm per bushel of aeration through in-floor ducting.

Neither of these tanks or any of the other tanks at the elevator contain grain temperature monitoring. “We’re processing about 100,000 bushels of soybeans a day at the plant, so the supply in storage keeps rotating,” says Meeuwsen.

These have outside stiffeners, flat floors, and 12-inch Springland sweeps. Each tank also has four Caldwell 40-hp centrifugal fans delivering 1/11 cfm per bushel through in-floor aeration.

Storage also includes a pair of 61,000-bushel steel hopper tanks to hold wet soybeans prior to drying. The tanks stand 37 feet in diameter and 90 feet tall, with 45-degree steel hoppers.

Adjacent to these is a natural-gas-fired Law mixed-flow grain dryer with integrated Marot scalper rated at 8,500 bph at three points of moisture removal.

Soybeans can be delivered to ZFS Ithaca via truck or rail through two receiving pits, one strictly for trucks and one for both truck and rail.

Trucks are weighed on inbound and outbound Rice Lake 90-foot pit-type scales, and soybeans are sampled with a GSI-Intersystems truck probe prior to being directed to the correct receiving pit.

The bulk of the soy processing is done in a 15,000-square-foot, 11-story preparation building and a 9,300-square-foot extraction building, including degumming and zero effluent discharge (ZED) systems using Crown Iron Works processes and technologies.

In the preparation building, soybeans are weighed, cleaned, scalped, conditioned, dried, dehulled, cracked, and flaked. The flakes are sent to the extraction building, where oil is extracted from them using hexane as a solvent.

The flakes are conditioned, dried, and have hexane removed before they are sent back to the preparation building for delumping, cleaning, sizing, and coating prior to being conveyed to meal storage.

Soybean oil is processed in the extraction plant to remove any hexane and can be degummed prior to shipment via tanker truck or rail tank car. Some of the oil goes directly to the ZFS plant in Zeeland, MI for further refining.

Soy hulls are cleaned, sized, and can be pelletized prior to being conveyed to hull storage. 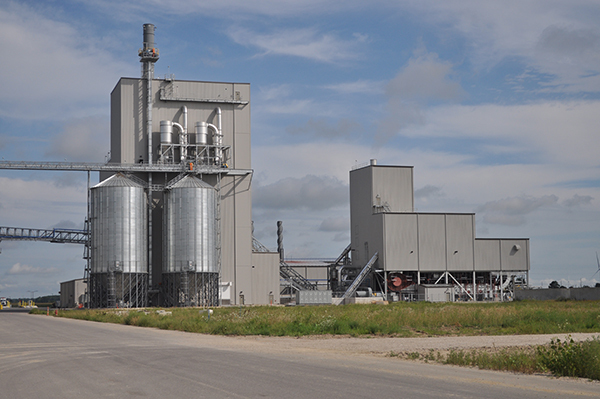 Preparation building (left) and extraction building are where most of the soybean processing operations take place.