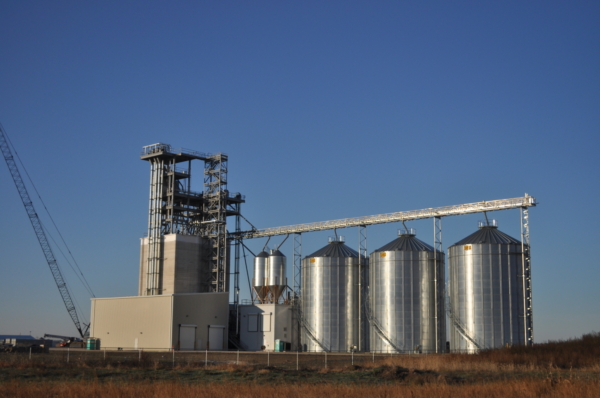 For nearly a century, animals on the University of Illinois’ “ACES South Farms” agricultural complex at its Urbana-Champaign campus have been fed from a 6,000-tpy feed mill on the south side of St. Mary’s Road.

That iconic structure soon is to be no more, as the university’s neighboring Research Park continues to grow and expand.

That mill’s production has been moved to a new state-of-the-art Feed Technology Center on South Race Street in Urbana. Test runs at the new $20 million facility were just starting up when Grain Journal visited early in November, and the grain elevator portion of the project already was receiving grain from university acres.

The Center has a capacity of 8,000 tpy of small-batch research diets, as well as regular rations for animals not currently part of any feed research projects, says Dr. Rodney Johnson, who heads the Department of Animal Sciences, part of the College of Agricultural, Consumer and Environmental Sciences (aces.illinois.edu).

“The new Feed Technology Center will significantly expand our capabilities in the animal nutrition space, which is critical for developing new diets that utilize novel ingredients, improve production efficiency in livestock and poultry, and enhance the health and wellbeing of animals, including dogs and cats,” he says.

All of this was done without going to Illinois taxpayers for cash, he notes. Funding for the project came from a public-private partnership. The university put down $6 million of its own money and financed the remaining balance. Private industry donated a significant amount of money and equipment.

Among the biggest donors were Archer Daniels Midland Co. (ADM), which committed $2.5 million, and $1 million largely in equipment donations from Bühler Inc. and AGCO. (For a complete list of donors, click here.)

Coordinating the project and overseeing the bidding process was Vermilion Campbell, a Chicago, IL-based developer. The construction contract was awarded to ASI Industrial, Billings, MT.

AGCO donated the facility's grain storage portion, which included three of their GSI 65,000-bushel corrugated steel tanks for dry corn and one of its GSI 10,000 bushel wet tanks.

“We calculated the size of the elevator to match annual production from our research farms,” says Mikaela Braun, research specialist in charge of managing the Feed Technology Center.

The AGCO big tanks stand 42 feet in diameter, 55 feet tall at the eaves, and 66 feet tall at the peaks. They are equipped with wraparound staircases, flat floors, AGCO power bin sweeps, and an AGCO 15-hp centrifugal fan per tank delivering 1/10 cfm per bushel of aeration.

The elevator is set up to receive grain at 2,500 bph and also has a 700-bph AGCO horizontal grain dryer.

Corn is ground in a 100-hp Bühler hammermill before going to the bulk ingredient bins.

The mill itself is a slipform concrete structure with 14 overhead ingredient bins holding approximately 28,000 cubic feet total. Ingredients are fed into the ASI-fabricated batching scales via a set of Diamondback hoppers to facilitate mass flow in a pack designed and fabricated by ASI Industrial. This operation and all others throughout the mill are under the control of a Bühler automation system.

The scales drop ingredients into a two-ton Bühler paddle-type mixer. Liquids from ASI liquid tanks, an APEC fat coater, and a 14-bin ASI bulk bag system with two scales are added at the mixer.

The Center can produce both bulk mash feeds and pelleted feeds. Mash feeds generally are bagged on a JEM bagging line and the bags stacked by a JEM robotic palletizer.

Mash feed destined for pelleting is processed on a Bühler DPCA-420 pellet mill with a 175-hp motor that can produce 3 to 5 tph depending the density of the product.

Bühler near-infrared sensors have been installed at half a dozen points in the product stream to monitor moisture, oil, protein, and other measures to make sure the batch meets specifications. University faculty also can test feed quality in their own laboratories.

Due to the large number of small-batch formulas utilized by the university, the mill includes 12 loadout bins holding approximately 38 tons each for truck loading. Trucks transport both bulk and bagged feeds to various research sites around campus.

Johnson says plans call for the addition of extrusion equipment for producing extruded feeds and pet food in the spring of 2021.