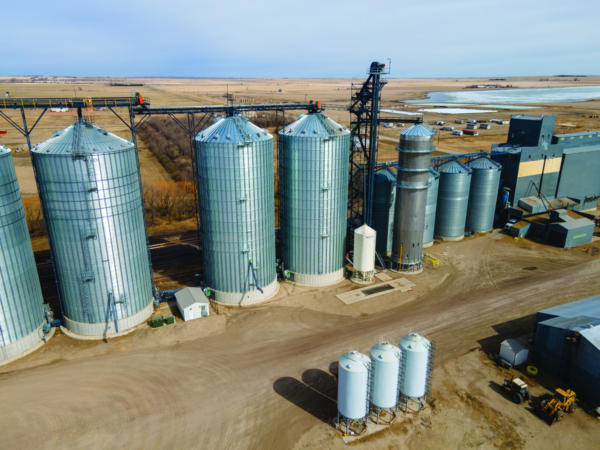 John Woodbury, location manager for the United Quality Cooperative rail terminal in Ross, ND, will remember the date of Jan. 9, 2020 for a long time.

The facility’s grain dryer was drying soybeans, and the heat sparked a fire in soybean pods (FM) running through the dryer. Several area fire departments responded to the blaze. “The Tioga (ND) Fire Department had brought out a ladder truck, because we could not reach the flames with conventional firetrucks. We ended up with canola getting hot enough to smolder.”

The next day workers were removing an overhead enclosed belt conveyor that had served the dryer. In the process, some embers somehow fell into a boot pit compromising a bin connected directly to a shipping leg. In the end, no one was injured, but the insurance company had estimated the total damage at $3.6 million.

The fire affected only a portion of the nearly quarter-mile-long row of upright storage parallel to U.S. Highway 2 in western North Dakota. However, a rebuild of that section was necessary to get the facility back in operation, so upper management and the coop board of directors authorized the project almost immediately.

After a bidding process, J&D Construction Inc., Montevideo, MN (800-279-6447), was hired as general contractor and millwright. “They offered the best competitive bid and timeline for getting us back into operation,” Woodbury says.

Work got underway in February. The facility was able to load some railcars by June, and the first 110-car shuttle train on the Burlington Northern Santa Fe Railway left the elevator in August.

The downtime allowed for the opportunity to install new equipment and resolve a need for more storage space. The new storage consists of two 207,000-bushel Sukup corrugated steel tanks standing 54 feet in diameter, 105 feet tall at the eaves, and 115 feet tall at the peaks.

Soil conditions at the site were unfavorable for supporting this kind of weight, however, so a total of 700 Geopiers for the two tanks had to be set down 70 feet deep.

A pair of Sukup 50-hp centrifugal fans per tank can deliver up to 1/5 cfm per bushel of aeration.

In the rebuild, the dryer has been moved farther away from the storage tanks and the demolished wet and dry legs have been replaced by a pair of Schlagel 30,000-bph shipping legs. These are equipped with two rows of Tapco 12x8 heavy-duty buckets mounted on a 25-inch Continental belt and supported by a 20-foot-x-20-foot Custom Fabricating Co. tower.

At the top, grain can be routed through one or both of a pair of GSI InterSystems gravity screeners. Woodbury notes that this should go a long way toward eliminating FM problems that could contribute to any fire in the future.

Instead of a distributor, grain is routed through a set of Schlagel two-way valves. Grain can reach the two new tanks via either a 15,000-bph or 20,000-bph Schlagel overhead drag conveyor.

The tanks empty onto a set of AGI Hi Roller 50,000-bph enclosed belt conveyors running to the new legs.

The new Sukup 7,000-bph tower dryer is fired by natural gas from a main line running along Highway 2. It has plenty of capacity at 7,000-bph at five points of moisture removal.

Woodbury notes, however, that due to extremely dry weather, the dryer has had relatively little grain to dry. The U.S. Department of Agriculture Drought Monitor as of mid-March had the area around Ross in “extreme drought.”

“We haven’t had more than a few bushels of beans come in over 12%,” Woodbury says.

Adjacent to the new dryer is a 5,000-bushel Meridian screenings tank.

From the March/April 2021 Grain Journal