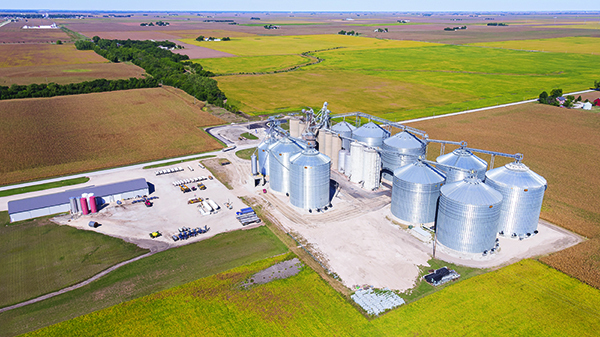 Maroa, IL — Virtually every acre of cropland around central Illinois is devoted to corn and soybeans. When it came time to expand storage and receiving capacity in 2020 at Topflight Grain Co.’s Emery Road elevator off U.S. Highway 51 between Forsyth and Maroa, IL, the cooperative chose to build two separate projects, one for corn and one for soybeans.

On the corn side, Topflight added a 105-foot-diameter corrugated steel tank holding 788,000 bushels.

For soybeans, the cooperative built an entirely separate soybean annex including two 90-foot-diameter steel tanks holding 572,000 bushels each. Also part of the annex, Topflight replaced a 75-foot-diameter, 283,000-bushel tank that had been destroyed April 7 in a windstorm.

“All of that allowed us to eliminate a 700,000-bushel ground pile,” says CEO/General Manager Derrick Bruhn, who has been with Topflight for 19 years and in his present position since April. “We saw a lot of market opportunity in this area for trucking grain to the big processors in Decatur (IL). In addition to the storage, we were able to boost our receiving capacity from 10,000 to 20,000 bph.”

Topflight divided up all of this work between two separate general contractors. “We didn’t want to tie up all of this work with one contractor, and we wanted to make sure everything was ready in time for harvest,” says Operations Manager Eric Clements, who has spent his entire 34-year grain industry career with Topflight.

Work on both projects began in March 2020 and was completed in time for harvest in September.

All of the tanks erected at Emery Road have additional safety features including a walkway around the rooftop and grab bar around the edge of the roof.

The adjacent 75-foot-diameter GSI tank is identical to the tank that was destroyed in April standing 69-1/2 feet tall at the eave and 89 feet tall at the peak. It is being included as part of the soybean annex.

A concrete receiving shed next to the new tanks houses a 1,800-bushel mechanical receiving pit and is equipped with a Schenck Process dust collection system. The pit feeds a 20,000-bph GSI leg with Maxi-Lift 20x8 TigerTuff buckets mounted on a 22-inch Continental belt.

The leg, in turn, feeds into an AGI HSI four-hole rotary distributor. The leg and distributor are encased in a 14-foot-x-14-foot-x-155-foot LeMar support tower.

The distributor sends grain onto a series of GSI overhead 20,000-bph drag conveyors running out to the soybean storage tanks. One duct feeds a gravity spout to a 5,000-bushel Meridian welded steel surge tank on top of the receiving shed used for truck loading.