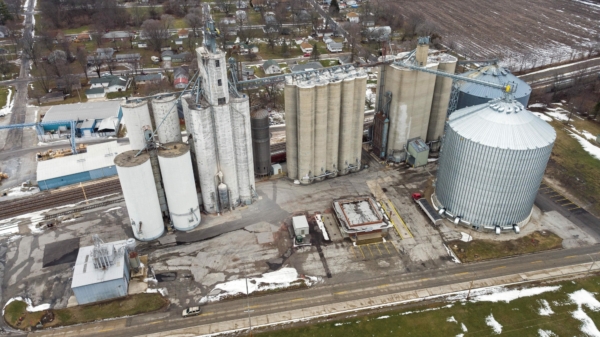 “We had significant storage deficits at three of our locations,” says Eric Clements, operations manager for Monticello, IL-based TopFlight Grain Co., looking back at 2017 projects. (Clements has spent his entire 31-year grain industry career based at TopFlight’s Bement, IL elevator [217-678-2261] following his graduation from Bement High School, almost directly across the street.)

Those deficits were running about 1 million bushels at Bement and Monticello and about 500,000 bushels at Atlanta, IL (217-648-2318), which TopFlight acquired from East Lincoln Farmers Cooperative in 2015.

“We were having to store some grain on the ground, haul some out to other storage sites, or load rail at inopportune times,” Clements continues. “We just needed some extra storage.”

TopFlight took several bids on the three projects and awarded the contract to Koehl Bros. Inc., Fairbury, IL (815-692-2326), which has done numerous projects with the cooperative over the years.

Additional contractors working with TopFlight in 2017:

The Bement elevator was the site of one of the first 105-foot-diameter corrugated steel grain storage tanks in the United States, manufactured by Butler Mfg. Co. (later acquired by Brock Grain Systems) in 1994. That tank, still in use, holds about 650,000 bushels.

Soil conditions on the site were challenging for such a large tank. Workers had to excavate nearly a dozen feet down and replace the earth with fill material that could hold the weight of the tank and its contents.

The tank is outfitted with a flat floor, outside stiffeners, 24-cable Canary grain temperature monitoring system from KDJ, and a 12-inch GSI X-Series zero-entry sweep auger.

A set of four 60-hp Chicago Blower centrifugal fans provides 1/7 cfm per bushel of aeration with the help of 13 roof exhausters. The fans are outfitted with silencers to hold down the noise in the residential neighborhood.

The tank is filled via an overhead GSI 20,000-bph drag conveyor, supported by a GSI tower. The tank is equipped with a GSI AgriDry spreader for even distribution inside the tank and to help maintain grain quality.

The tank also is equipped with a sidedraw spout but otherwise empties onto a GSI 10,000-bph drag conveyor in an above-grade tunnel. That conveyor drops grain onto a second, below-ground conveyor running underneath a driveway.

The new 105-foot-diameter tank at Monticello is two rings taller than the one at Bement and holds 788,000 bushels, the largest GSI currently manufactures in the 105-foot range.

This tank stands 99 feet tall at the eave and 126-1/2 at the peak. It’s outfitted similarly to the tank in Bement but with four larger 75-hp Chicago Blower centrifugal fans to maintain 1/7 cfm per bushel of aeration.

An overhead 25,000-bph GSI enclosed belt conveyor delivers grain to this tank. As in Bement, a 10,000-bph GSI drag reclaim conveyor starts above ground but drops below ground to avoid a driveway.

The smaller 90-foot-diameter tank constructed at the Atlanta elevator stands at the northeast end of the property at the end of a row of steel tanks. This 575,000-bushel tank stands 98 feet tall at the eave and 121 feet tall at the peak.

An overhead 20,000-bph GSI drag conveyor is used to fill the new tank, which empties onto a 7,000-bph GSI reclaim drag in a below-ground tunnel running back to existing equipment. 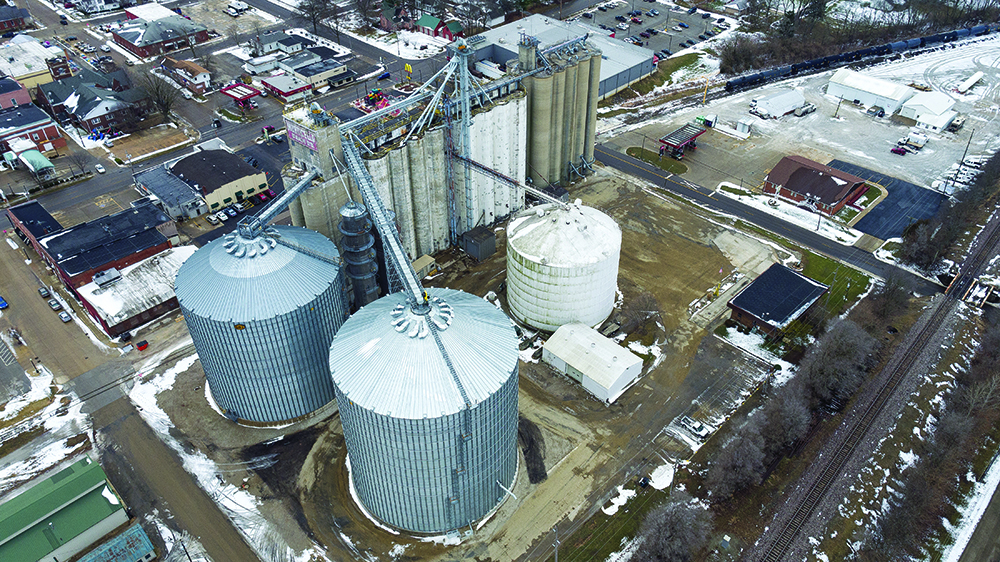