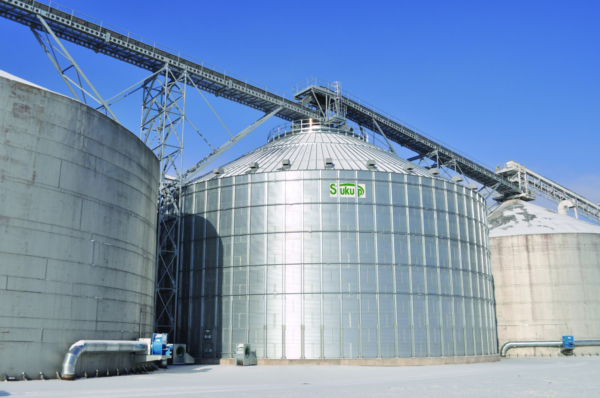 Back in the mid to late 1960s, The Andersons, Inc. brought in roughly two dozen welded steel tanks the grain handler had purchased from the Texas oil industry for its grain terminal in Champaign, IL (217-352-7011).

The tanks were disassembled, trucked to Illinois, and reassembled on-site. Those tanks, rated at 500,000 bushels of capacity each, provided the bulk of the elevator’s 12.5 million bushels of upright storage for decades.

However, one of those tanks collapsed without warning in the early hours of Jan. 18, 2016. The tank was filled with corn at the time, which spilled out and damaged some nearby rail track and adjacent tanks. However, employees were not at the Champaign facility at the time, and no one was injured.

“The weather had turned sharply colder at the time, and we think that exposed a weakness in the tank,” says Sergio Hernandez, regional operations manager who has been with The Andersons for eight years.

However, the tougher question was replacing the collapsed tank with a modern corrugated steel tank that would fit on the old tank’s footprint. At 114 feet, the diameter is not standard for steel grain storage manufactured today.

“We specified a tank from Sukup (Mfg. Co., Sheffield, IA, 641-892-4222),” says Brian Stark, regional sales manager, an 11-year veteran of The Andersons. “We looked at a lot of manufacturers, and Sukup was the only one willing to retool its production line to produce a 114-foot tank in time for harvest.

“The timing was critical as it allowed us to maintain the same level of service our customers have come to expect from The Andersons throughout the harvest.”

Corrugated steel tank sizes for grain storage are available at 105 feet in diameter then jump to 135 feet, with nothing in between. So when The Andersons Inc. approached Sukup Mfg. Co., Sheffield, IA (641-892-4222) to build a 114-foot-diameter tank, it was a challenge but not an impossible one, says Brad Poppen, grain bin engineering sales for Sukup.

“We can build to any diameter so long as it’s divisible by three,” he explains. In this case, 114/3 = 38 corrugated steel wall sections.

“The key,” Poppen says, “is fabricating the roof sheets and rafters to match the odd diameter, and that required retooling the Sheffield plant for this one job.”

“That’s one of our selling points,” he adds. “We’ll do what other manufacturers won’t, in order to serve the customer’s needs.”

Construction began in May 2016 for an undisclosed sum, and the new tank was ready to receive grain in October.

The tank is equipped with Sukup’s first-ever paddle sweep auger. “We were willing to try it because of the cleanliness of the floor after the paddle sweep goes over it,” Hernandez says. “It’s run very well so far.”

The tank also has outside stiffeners and a Rolfes@Boone grain temperature monitoring system. A set of four Sukup 20-hp centrifugal fans provide 1/10 cfm per bushel of aeration through in-floor ducting with the assistance of four 2-hp roof exhausters.

“So far, everyone at Champaign is pleased with the new tank’s performance,” says Hernandez.