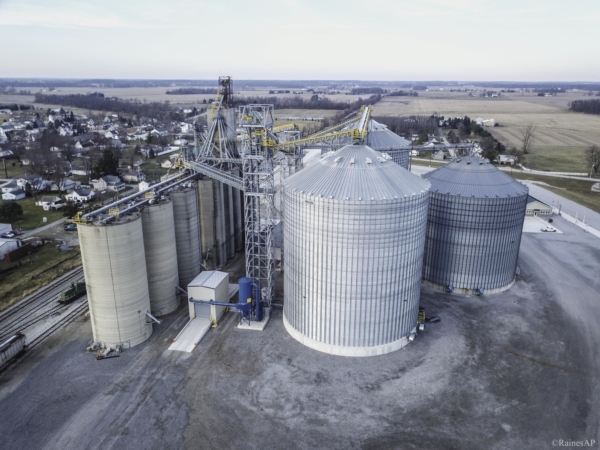 New construction at Sunrise Cooperative’s rail terminal at Uniopolis, OH includes a new 850,000-bushel Behlen steel tank in foreground, an identical tank behind the first, new enclosed receiving pit with 20,000-bph Hawthorne-Seving leg to the left of the new tank, and a variety of overhead transfer conveyors.

Uniopolis, OH — In 2016, when Sunrise Cooperative Inc. merged with the former Trupointe Cooperative, it quickly became apparent that the Trupointe location at Uniopolis, OH, about 10 miles south of Lima, needed some work.

The Uniopolis location (419-568-2467) was a particularly important one for the merged entity, because it loads trains on the Indiana & Ohio Railway (IORY), a short-line with connections to the CSX and Norfolk Southern (NS) Class I railroads. The two big railroads cover the eastern half of the United States.

“We didn’t have nearly enough speed or enough storage space for the ever-increasing yields in that part of Ohio,” says Gary Snell, Sunrise vice president of operations. (Snell is a 19-year veteran of the coop system and joined Sunrise from the Trupointe side with the merger.)

From a period starting almost immediately after the merger through October 2018, Sunrise added two Behlen corrugated steel tanks holding 850,000 bushels each, added a new 20,000-bph receiving pit and leg, and replaced a series of overhead conveyors as slow as 4,500 bph with 25,000-bph and 30,000-bph models. The coop also installed new inbound and outbound truck scales under the control of a CompuWeigh SmartTruck automation system.

Serving as general contractor and millwright on this nearly three-year project was Elevator Services & Storage, Inc. (ESSI), Beaverdam, OH (419-643-5111). Also, much of the grain handling equipment was manufactured by Hawthorne-Seving Inc., ESSI’s manufacturing division in Beaverdam.

“ESSI has had a long-term relationship with Sunrise, and both of us remain loyal to our partnership,” says Snell. “Construction went well, and ESSI has always been good to work with.”

The first phase of the project was limited to the addition of the first of two Behlen 850,000-bushel corrugated steel tanks and related grain handling equipment.

A set of four 100-hp Rolfes@Boone centrifugal fans deliver 1/10 cfm per bushel of aeration on corn and 1/15 cfm per bushel on wheat with the assistance of 13 roof exhausters. Jason Vondenhuevel, grain operations manager at Uniopolis, says the heavy dose of air allows grain to be stored at a higher moisture level at harvest. (Vondenhuevel has been with Sunrise for three years after working for the oil industry.)

The tank is filled by an overhead 12,000-bph GSI drag conveyor and empties onto a 12,000-bph above-ground drag running back to an existing receiving pit.

The second of two Behlen tanks, identical to the first, was constructed in 2017.

That year also saw the construction of a new 20,000-bph Hawthorne-Seving reclaim leg, which was equipped with a double row of 14x8 HD-Max Maxi-Lift buckets mounted on a 31-inch ContiTech belt. The leg is supported by a 18-foot-x-18-foot-x-164-foot Warrior tower.

The leg deposits grain onto a series of new Hawthorne-Seving 20,000-bph overhead transfer drag conveyors with Hawthorne-Seving catwalks serving the steel storage complex on the east side of the facility.

During the third and final phase of construction, ESSI installed a new 20,000-bph enclosed receiving pit that feeds into the reclaim leg. The pit is serviced by a Hawthorne-Seving baghouse dust collection system outfitted with Donaldson Torit dust filters.

Also installed that year was an eight-hole Schlagel rotary distributor mounted on the concrete portion of the facility. “We can reach every tank from there,” Vondenhuevel says.

For receiving operations, the coop installed Brechbuhler 90-foot pitless inbound and outbound truck scales. An Intersystems truck probe takes samples prior to inbound weighing, and the outbound scale is equipped with a scale ticket printer.

Drivers are issued RFID cards that identify trucks to a CompuWeigh SmartTruck system that routes trucks through the facility and assigns the grain to appropriate pits and storage. Drivers receive instruction via SmartView digital message boards.

Snell comments that during the 2018 harvest, average truck transit time through the Uniopolis elevator shrank from 25 minutes the previous year to about 10 minutes.

Future projects. The Sunrise board of directors in January 2019 approved the construction of three more 105-foot-diameter Behlen steel tanks. One will we located at Uniopolis and the other two locations will be determined following a project engineering study already under way. 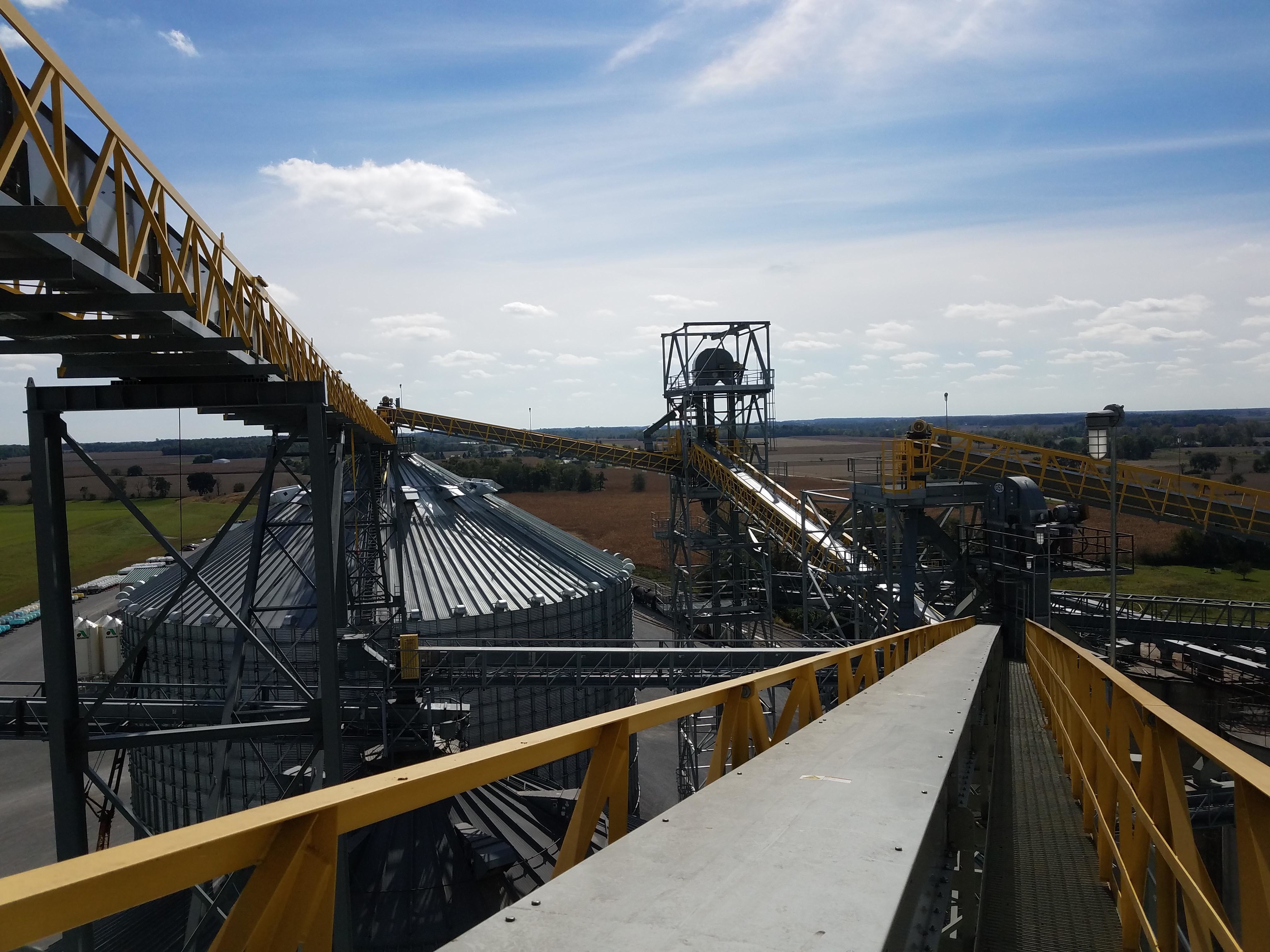 Most of the overhead drag conveyors at Uniopolis were replaced with new Hawthorne-Seving 25,000-bph drags. 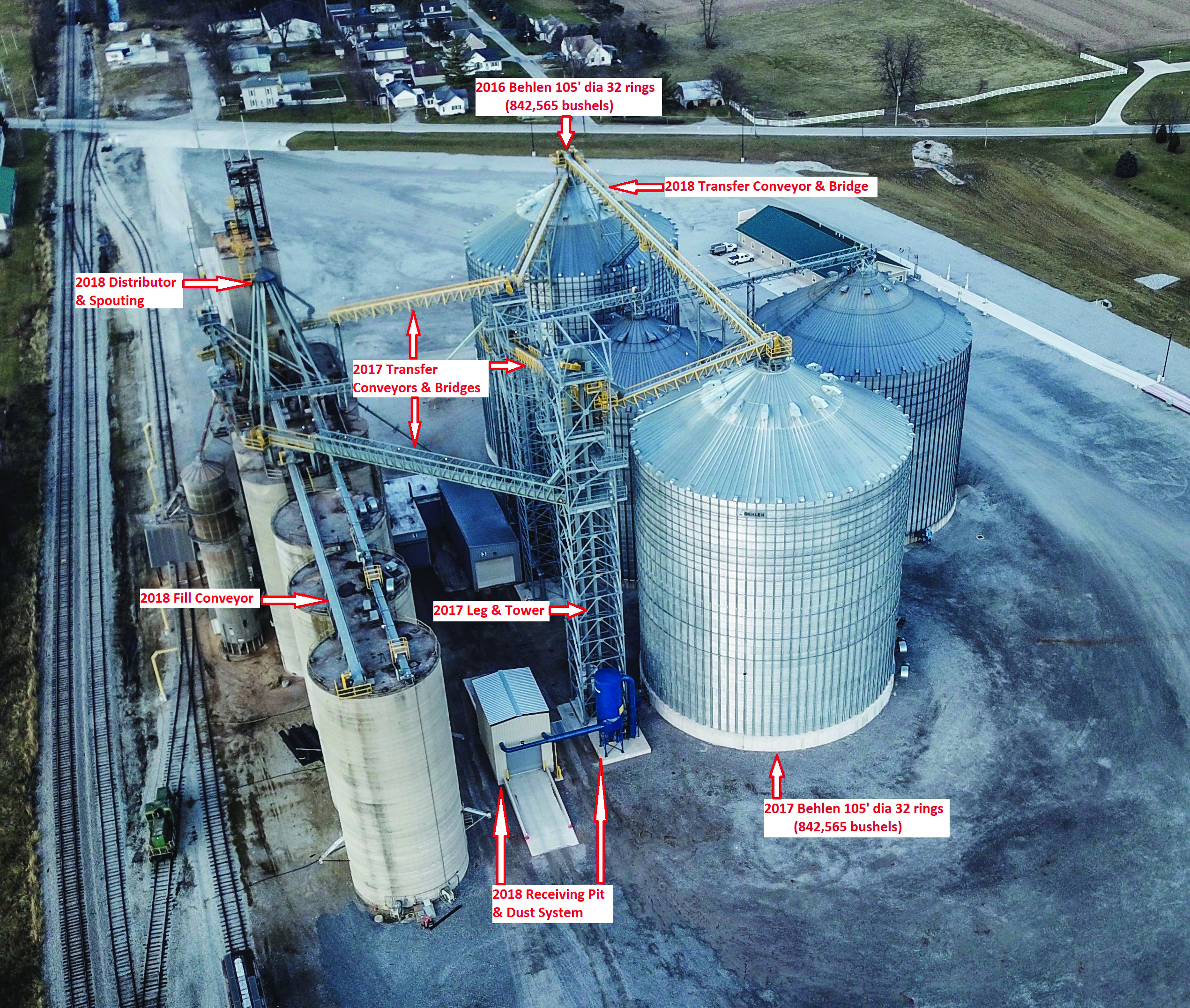 Aerial view shows most of the construction at Sunrise Cooperative in Uniopolis and the year in which each portion took place.