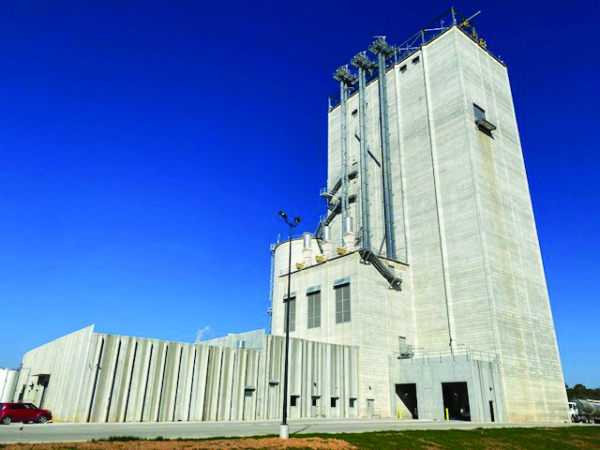 Pilgrim’s Pride Corp. until 2020 had been supplying feed to its extensive poultry operations in northwest Georgia through two feed mills in Ellijay and Canton for its chicken “grow-outs.”

The privately-held company wanted to consolidate the two aging feed mills into a single modern facility to be located between the two grow-outs to serve area customers better and reduce delivery costs.

Pilgrim’s selected a site in Ranger, GA along U.S. Highway 411, a well-traveled two-lane blacktop, with rail access to a CSX Transportation rail line to bring in corn from the Midwest.

Some challenges remained for the poultry company, however, according to Milling Manager Jamison Pass, a 23-year veteran of the poultry industry who has been a feed mill manager with Pilgrim’s for the past 10 years.

One challenge was making sure there was enough storage for corn and soybean meal for a 20,000-tpw mill.

A bigger challenge, however, was segregating the different product lines from the two old mills into the new mill. “We currently produce NAE (no antibiotics ever) poultry feeds for the Canton grow-out and NHA (no human antibiotic) for the Ellijay grow-out,” Pass says. “The new mill is equipped with two mixing lines in order to have complete segregation of the two feeding programs.”

Clearing and grading work on the site, performed by D&S Construction, began late in 2017. Todd & Sargent was on-site in 2018 to lay below-ground concrete and build the slip forms.

The mill began production in the summer of 2020.

Almost All Corn Arrives by Rail

Almost all of the corn used by the Ranger mill arrives by rail. The site includes 3,000 linear feet of loop track. The main loop is capable of holding a 90-car unit train, while a second, partial loop track can hold an additional 45 railcars carrying soft stock such as soymeal.

The facility is equipped with Rice Lake Weighing Systems truck and receiving scales and is designed to receive grain at 60,000 bph through a pair of GSI InterSystems bucket elevators with Maxi-Lift elevator buckets.

Whole corn is stored in a pair of 450,000-bushel slipform concrete tanks standing 63 feet in diameter and 153 feet tall. These flat-bottom tanks are outfitted with Springland bin sweeps and BinMaster level monitoring. However, there is no grain temperature monitoring or aeration since the tanks are designed for short-term storage.

Corn is ground on three Champion hammermills from CPM. They operate at 120 tph into the mill’s fine-grind bins for broiler rations or at 60 tph for the coarse grind bins for breeder rations.

Incoming soymeal is stored in a smaller upright 4,200-ton slipform concrete tank standing 57 feet in diameter and 111 feet tall. This tank is outfitted with a Laidig track-drive reclaim system.

Mill is a Slipform Concrete Structure

The mill is segregated into two production lines to handle NAE and NHA feeds, respectively. Milling operations are under the control of a Beta Raven control system by CPM Automation. Pass says Pilgrim’s specified that system due to the outstanding service the manufacturer provides during installation and support afterward.

Ingredients are combined in one of two Scott Equipment twin-shaft mixers, a 12-ton mixer dedicated to the NHA feeding program and an 8-ton model dedicated to the NAE program. Average mixing cycle is 3 minutes per batch.

In addition to the overhead ingredient bins, ingredients can be added from an eight-tote system, two 20-bin Beta Raven microingredient systems from CPM, or from separate liquid tanks. Liquids added at the mixer include lysine, choline, methionine, and animal fats.

Pass says that approximately 85% of the mash feeds at this point go on to pelleting for broiler feeds, while the remaining 15% are shipped as bulk mash feed for breeder rations.

Depending on the product line, mash feed for pelleting is directed to one of three 600-hp CPM Model 9042 pellet mills, each outfitted with a CPM steam conditioner. Steam is generated by two 600-hp Johnston boilers.

Pellets then pass through three 7-foot-x-63-foot CPM horizontal coolers. Fat is added after cooling with APEC fat coaters. Pellets destined for starter rations are run through a pair of CPM crumblers.

Finished feeds are loaded onto trucks in two loadout bays, each equipped with 9-ton GSI InterSystems weigh lorries. These take an average of six to seven minutes to load a semi truck. Pilgrim’s utilizes a pair of contractors to handle trucking.

“Each contractor hauls for only one complex,” says Pass. “This keeps total segregation of the feed types and doesn’t allow any accidental mixing of feeds.”

From the March/April Grain 2021 Journal