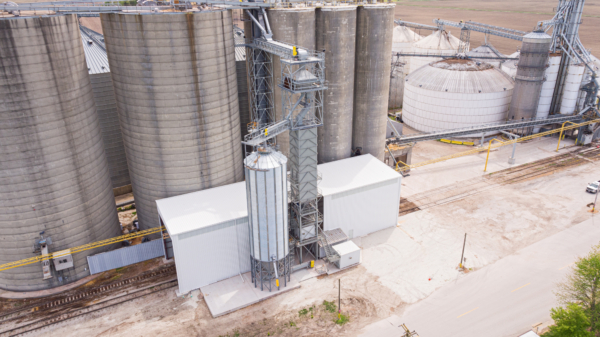 Dewey, IL — Until the end of April 2021, Premier Cooperative had to load railcars with corn and soybeans at two different locations at its Dewey, IL rail terminal (217-897-1111).

Then, each loaded railcar was weighed on a track scale, just to make sure none of them were overloaded.

After loading and weighing, the railcars would be picked up by locomotives from the Canadian National (CN). The Dewey elevator is at the end of a 7-mile rail spur owned by the cooperative that connects to an CN main line at Rantoul, IL. Much of the facility’s grain is shipped to the Gulf for export, says Jeff Breen, COO, who has been with the cooperative his entire 32-year career.

“We wanted to be more efficient with our employees,” adds Jason Risley, regional operations manager who came to Premier four years ago from JBS Group at Royal, IL. “At both loadout locations, we were operating separate loading crews, two switching crews, two Trackmobile drivers. It took 12+ people to load a train.”

Today, thanks to the rail-loading improvement project, it takes seven to eight people, adds Risley.

That project consolidated rail loading into a single site, with a new shipping leg, a fully-automated bulk weigh loadout scale to provide official origin weights, and an 18,000-bushel screenings tank.

Construction began the beginning of March 2020, and the upgraded facility began loading 110-car unit trains on the CN in November. Breen comments that construction would have gone more quickly, but the COVID-19 pandemic caused delays and disruptions in the construction industry nationwide.

As of April 2021, the cooperative had loaded 36 trains at Dewey.

The rail loading process begins with a GSI 40,000-bph shipping leg that can gather grain from anywhere in the facility. The leg is outfitted with three rows of Maxi-Lift 16x8 HD-CC buckets mounted on a 54-inch Continental belt. The leg is enclosed by an APEX 10-foot-x-12-foot-x-119-foot support tower.

The leg deposits grain onto an overhead AGI Hi Roller 60,000-bph enclosed belt conveyor on an APEX 10-foot wide catwalk running out to an APEX 12-foot-x-18-foot-x-35-foot-tall screener tower sitting on top of the new bulk weigh loadout scale. Other existing legs and conveyors can bring grain to the overhead Hi Roller conveyor and bring it up to capacity.

“We have 100,000 bph available to source from,” Ridley says, “which helps with flexibility.”

"We wanted to be more efficient with our employees. At both loadout locations, we were operating separate loading crews, two switching crews, two Trackmobile drivers. It took 12+ people to load a train."

The 60,000-bph bulkweigher, manufactured by C&A Scales, is under the control of a Greenstone Systems oneWeigh automation system. The workstation is operated from a metal shed overlooking the rail-loading site inside the metal loadout shed. A trackside RFID card reader provides car capacity data to the oneWeigh system.

The operator has the option of running grain through a GSI InterSystems 40,000-bph gravity screener, before it drops into the bulkweigher.

A GSI overhead 10,000-bph drag conveyor on a 5-foot-wide APEX catwalk carries screenings to a GSI 18,000-bushel corrugated steel screenings tank. It stands 21 feet in diameter, 73 feet tall at the eave, and 79 feet tall at the peak and empties through a 60-degree steel hopper.