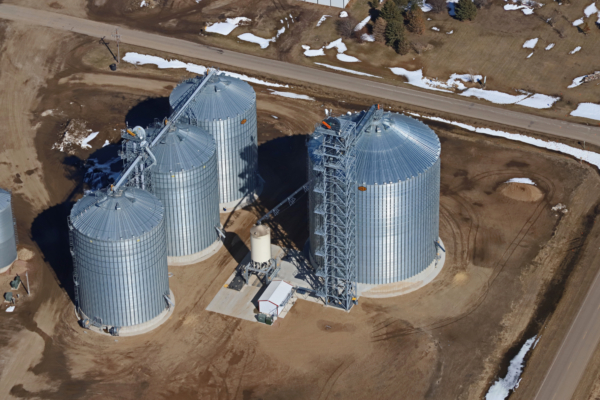 As of today, there is only one commercial business left in the community of Bancroft, SD, population 19 in the 2010 census – the Prairie Ag Partners Inc. grain elevator (605-546-2191), with storage scattered around the southand west sides of town.

“The school closed in the 1970s, and most of the people went with it,” says Location Manager Craig Purintun, who has been at the Bancroft elevator for 21 years.

For what little is left of the town, however, the Bancroft elevator is a big deal to the producers farming the flat, fertile acres in the area. Bushel volume continues to grow, especially in recent years as producers switched some of those acres from wheat to corn and soybeans.

“Farmers are getting better and better at producing bigger crops,” says Purintun. “Even in a disaster year like 2019, when it was too wet to harvest for most of the fall, a lot of the crop got piled on the ground. Then in 2020, we had a good year, with 180 to 200-plus bushels per acre for corn and about 50-60 bushels per acre for soybeans. It came in dry, too, so we hardly had to run the dryer.”

The elevator was in better shape to handle a big harvest in 2020 with the construction of a 768,000-bushel standalone steel addition situated just west of town next to the county blacktop that runs through Bancroft.

“It helped, but even then, we had to pile some bushels on the ground,” says Purintun.

The facility is designed for the addition of another 768,000-bushel corrugated steel tank, a 300,000-bushel wet tank, and a 5,000-bph grain dryer. While the cooperative is committed to these further additions, no timetable has been set.

The cooperative took bids on the project and awarded the contract to LandMarc Construction Inc., Hawarden, IA (712-552-1200), which served as general contractor and millwright.

“This is their first time here at Bancroft, though they had put in a tank at Oldham (SD),” Purintun says. “They did excellent work.”

It was fast work, too. Construction got underway in May, and the new tank was ready to go into operation by the end of September. The tank currently holds soybeans.

“We started filling it Sept. 28,” Purintun says. “We took in 71,000 bushels that first day, and the tank was completely filled in 11 days. Everything went fine.”

It is equipped with outside stiffeners, flat concrete floor, two sidedraw spouts, a Daay bin paddle sweep, and a full bin switch to indicate when the tank’s capacity is reached.

However, it does not include grain temperature monitoring cables, since turnaround is expected to be fast enough to maintain grain quality.

The tank also includes a set of four GSI 50-hp centrifugal fans capable of delivering 1/10 cfm per bushel of aeration through in-floor ducting.

The pit feeds a Schlagel 20,000-bph receiving leg which is outfitted with a single row of Tapco 20x8 Xtreme elevator buckets mounted on a 22-inch Continental belt.

The leg is enclosed by an 18-foot-x-18-foot-x-165 foot Warrior tower with switchback stairs, which also encloses a six-hole Schlagel swingset distributor at the top.

Currently two of the ducts are in use, one feeding a gravity spout to the surge tank and the second feeding a Schlagel 40,000-bph drag conveyor running to the new tank. Additional ducts will come into use as additional tanks and the dryer are added in the future.

The fill conveyor is supported by a Warrior bridge spanning 109 feet with an expanded metal walking surface.

The tank empties onto a Schlagel 20,000-bph drag conveyor carrying grain back to the receiving leg.

- From the March/April 2021 Grain Journal