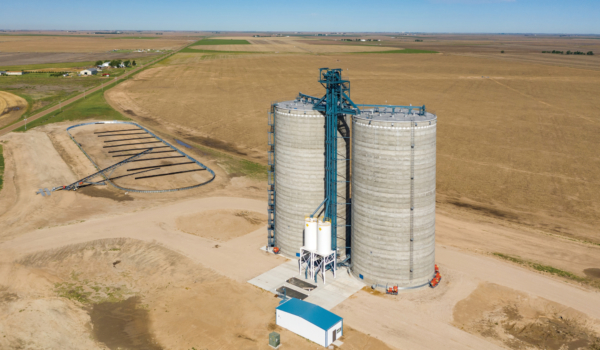 Hugoton, KS - Back in 1978, when Perryton Equity Exchange built a 560,000-bushel steel grain elevator on a two-lane blacktop in a remote area of southwest Kansas, there already was a large and growing amount of irrigated crops in the area between Liberal, KS and Hugoton, KS.

The farmer-owned cooperative called the elevator its “Prairieola” facility after an old one-room schoolhouse near the site. The schoolhouse is long gone, and the Equity Exchange elevator (620-624-4262) is all you will find in Prairieola today. (The elevator has a Hugoton mailing address.)

“There was a lot of irrigation back then, but there’s even more today,” says Wes Beal, coop director of grain operations and logistics, who came to the Exchange 16 years ago after working for CoMark. “We were getting 100 bushels per acre on corn then, and now between the irrigation and technical advances in agronomy, it’s common to see 250 or 270 bushels under center pivot.”

He notes that the Ogallala Aquifer in his part of Kansas remains a substantial source of water for irrigation.

“We were turning the elevator more than four times a year,” Beal continues. “The logistics of keeping trucks moving was a challenge.”

For that reason, the coop decided to add 1 million bushels of storage at the Prairieola facility, this time in the form of two 500,000-bushel jumpform concrete tanks, along with a receiving pit, legs, distributor, conveyors, and truck scale.

To construct the $6.5 million project, the cooperative hired the team of McPherson Concrete Storage Systems, McPherson, KS (800-999-8151), which built the jumpform tanks, and Frisbie Construction Co. Inc., Gypsum, KS (785-536-4288), which served as contractor and millwright.

Soil conditions at the site made soil engineering necessary. “We excavated 7 feet down, then refilled and compacted it with 9 feet of fill on 6-inch lifts,” says Beal. “That gave us the soil strength we needed to support the annex.”

In addition to the earth work, the coop also had to run a new electric line out to the elevator from a substation 10 miles away to provide enough power to run the annex without affecting service to any neighboring farms.

The two McPherson tanks are 72 feet in diameter and 140 feet tall. While the supplier’s cone-bottom tanks are very popular in the western part of the state, Equity Exchange opted for a flat floor instead.

Each tank is outfitted with twelve 40-hp Tiernan aeration fans, six on aeration runs and six working in tandem, capable of producing 1/6.8 cfm per bushel of air. The facility has no grain dryer, but Beal says the aeration is enough to dry the harvest most years. “We’re at 3,000 feet of elevation, and the humidity here is very low,” he says. “Most years we can take 19% or 20% corn and knock it down sufficiently with ambient air.”

From there, trucks proceed to one of two 1,400-bushel receiving pits long enough to take grain from both hoppers at once. These feed a pair of Schlagel 18,000-bph legs equipped with 18x8 Maxi-Lift heavy-duty buckets.

The legs deposit grain into a six-hole Schlagel SwingSet double distributor. From there, grain can reach the storage tanks via either gravity spout or 18,000-bph overhead Schlagel drag conveyors. “This setup lets us reach two tanks from a single leg,” Beal comments.

Each tank is equipped with a sidedraw spout. After the level of the grain drops below the sidedraw outlet, the tanks empty onto 16-inch-diameter Frisbie unloading augers. These run back to the receiving legs.

The distributor also can send grain via gravity spout to a pair of FCS 3,200-bushel overhead surge tanks, which also are used for truck loading.

“In designing the annex, we were thinking about the future,” Beal says. “Someday we’re going to see autonomous, driverless combines, wagons, and trucks delivering fertilizer and taking away grain. Being ready for that is really important.”