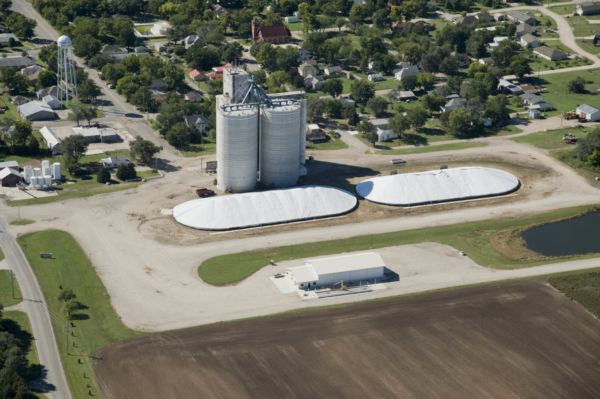 MARQUETTE, Kan. - When Mid-Kansas Cooperative (MKC) added a pair of 365,000-bushel McPherson jumpform concrete tanks in 2016 at its branch elevator in Marquette, KS (785-546-2214), the idea was that these were not going to be the last. Ever-increasing yields, especially for fall crops, in central Kansas would ensure that.

“We’ll be able to add more tanks in the future,” says Shane Eck, senior location manager who came to MKC from Dodge City Coop Exchange (now Pride Ag Resources) in 2010. “We have the space to expand to the east, west, and north.”

In addition to the increased grain storage capacity at Marquette, now totaling about 1.6 million bushels, the cooperative added a new office and warehouse building with grain lab, moved in two truck scales from other MKC locations, and installed a new truck probe.

“We were looking to increase efficiency in handling our truck traffic,” says Marquette Location Manager Lance Thompson who has been with MKC for one year, after 20 years in the auto industry in sales.

For the new 730,000-bushel concrete addition, MKC hired Frisbie Construction Co. Inc., Gypsum, KS (785-536-4288), as general contractor and millwright. “They’re one of our preferred contractors,” says Eck, “and once again, they did a very good job for us.”

To construct the actual tanks, the coop brought in McPherson Concrete Storage Systems, McPherson, KS (800-999-8151). “We specified McPherson tanks,” Eck notes, adding that the coop wanted concrete for its longevity. “They finish on schedule, and they also do a very good job.”

Work got underway in the fall of 2015, and everything was ready for the start of wheat harvest in the summer of 2016.

The tanks are set up with a high volume of aeration with eight tandem-mounted 40-hp Tiernan centrifugal fans per tank plus six roof exhausters, each capable of generating 1/6 cfm per bushel of air.

Coop brings in new equipment for grain movement and testing

Trucks headed for the new addition proceed to a 1,000-bushel gravity receiving pit adjacent to the new tanks.The pits feed an 18,000-bph Schlagel receiving leg equipped with 20x8 Tapco heavy-duty buckets mounted on a 22-inch belt. The leg, in turn, empties grain into a Schlagel six-duct rotary distributor, which sends the grain via gravity spout into the new tanks.

In addition, a topoff drag receives grain from the new distributor, is used to top off the two new tanks, and is arranged for adding future tanks without additional filling equipment changes. Also, a top reversing drag can transfer grain to the existing workhouse or from the existing in-house leg to the new tanks.

An alternative means of returning grain into the existing annex is a 25,000-bph annex-filling drag. This drag receives grain from the reversing crossover drag and the existing in-house leg.

The new tanks are outfitted with sidedraw spouts for truck loading. Beneath the level of the sidedraws, grain is reclaimed using the paddle sweeps and unloading augers, which push grain into the 18,000-bph Schlagel leg.

“Frisbie had to perform a few routine adjustments at startup, but the addition has been working really well since then,” says Thompson.