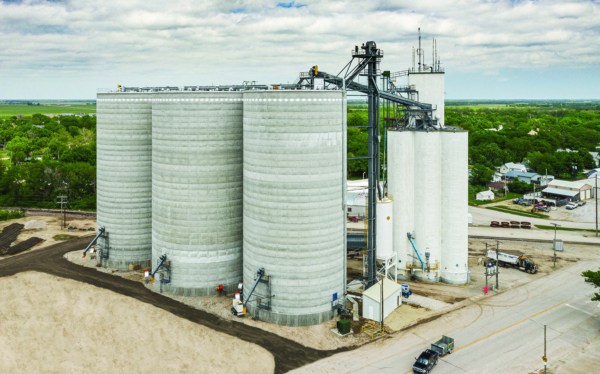 The 2.5-million-bushel grain elevator operated by Mid Kansas Cooperative (MKC) in Moundridge, KS stretches several blocks through the heart of the town of 1,737.

The headquarters elevator for the more than 3,000-member coop extends across both sides of Cole Street, the main east-west artery through town.

So finding space to add another 1.25 million bushels of storage in 2019-20 took some consideration and planning, says Senior Location Manager Adam Butler, who came to MKC in 2015 after working at several Kansas locations for Cargill.

Going with jumpform concrete tanks offered the advantage of being able to build taller on a smaller footprint, as well as the usual arguments for concrete, such as longevity. “We also had a surprisingly competitive bid,” Butler says without elaborating on the amount.

Even so, he adds, building three new tanks on the north side of Cole Street adjacent to an existing slipform concrete workhouse required the demolition of several older steel tanks and an old shop building.

The winning bid on the project went to Frisbie Construction Co. Inc., Gypsum, KS (785-536-4288), a contractor that has worked extensively with MKC on numerous projects. The three new tanks were built by McPherson Concrete Storage Systems, McPherson, KS (620-241-4362).

Kasa Controls & Automation, Salina, KS (785-825-7181), supplied a complete automation system for the project. which interfaces with a Electro-Sensors hazard monitoring system to sound an alarm or even shut down the elevator in the event of an operational problem that requires it.

Construction broke ground in September 2019. Final touches on electrical systems were expected to be completed at the beginning of June 2020, when Grain Journal visited the site in mid-May.

Of the three tanks, explains Director of Facilities Jon Brown, the center tank, at 490,000 bushels, is larger than the two outer tanks, at 365,000 bushels capacity. Again, that was done to maximize storage capacity in a limited space, says Brown, a 10-year MKC veteran who is in charge of the cooperative’s construction projects.

The leg deposits grain into a five-duct Schlagel electronic rotary distributor. This, in turn, delivers grain via gravity spout to 20,000-bph BCI overhead drag conveyors running out to new storage or onto a 20,000-bph reversing drag conveyor that connects with the workhouse. One spout drops grain into a 5,000-bph FCS surge tank for loading trucks.

Also for truck loading, the new tanks are equipped with sidedraw spouts. For cleanout, they empty into a 10,000-bph BCI drag conveyor in a 5-foot-tall above-ground tunnel. The Kasa automation system allows sumps to open by set percentages for blending on the go, when appropriate.

In addition to the elevator expansion, work in Moundridge included construction of a new 6,000-square-foot cooperative-wide training center, which is expected to open later in 2020.

The single-story steel building, located about a block south of the new elevator construction, has been completed.

It houses classroom and conference room space and will include a miniature working grain elevator for demonstrations and hands-on training. Already installed in the building is a miniature working manlift and a full-size anhydrous tank. All working equipment is being donated by manufacturers.

Look for a longer article about the MKC training center in an upcoming issue of Grain Journal. 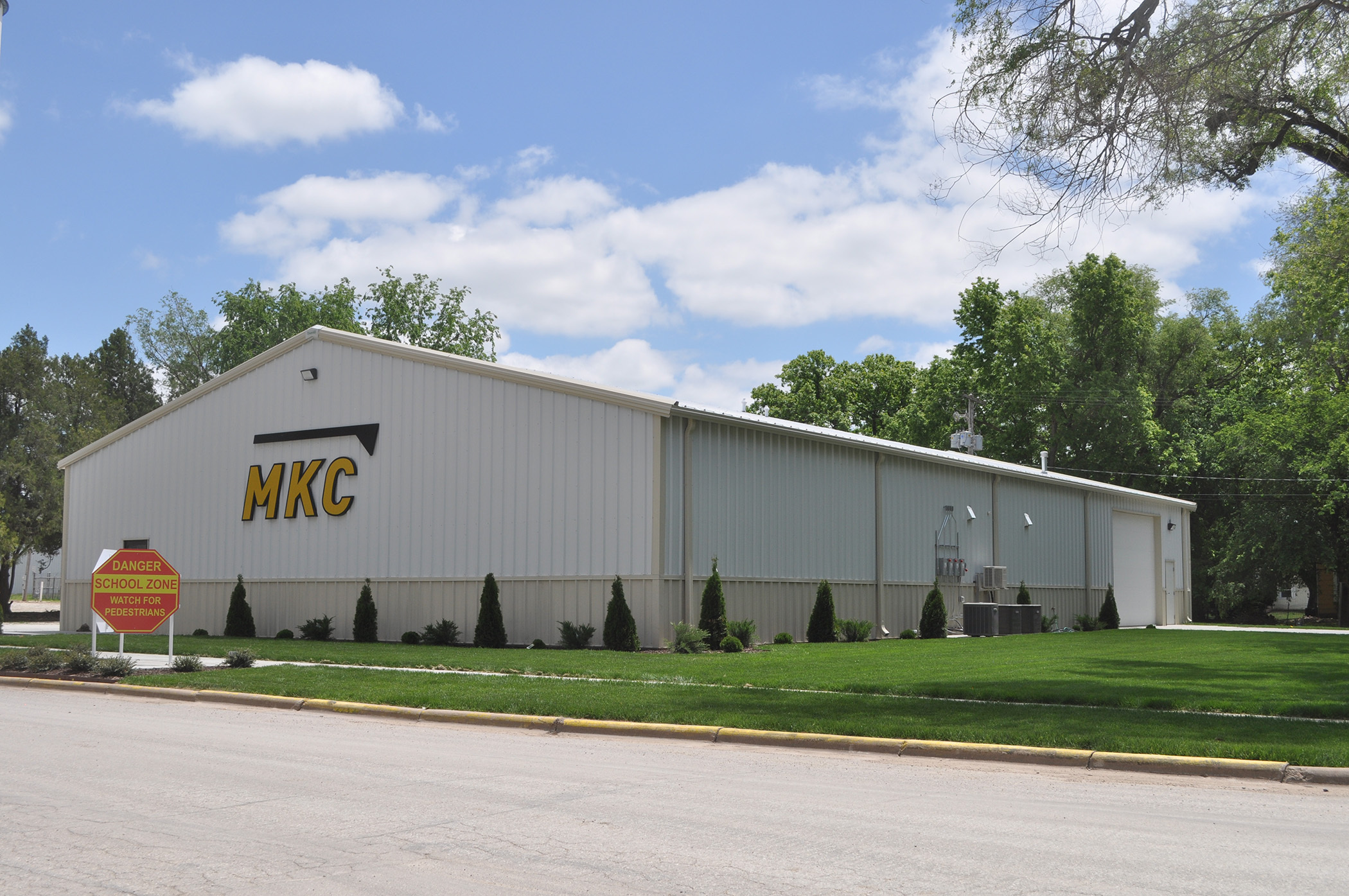 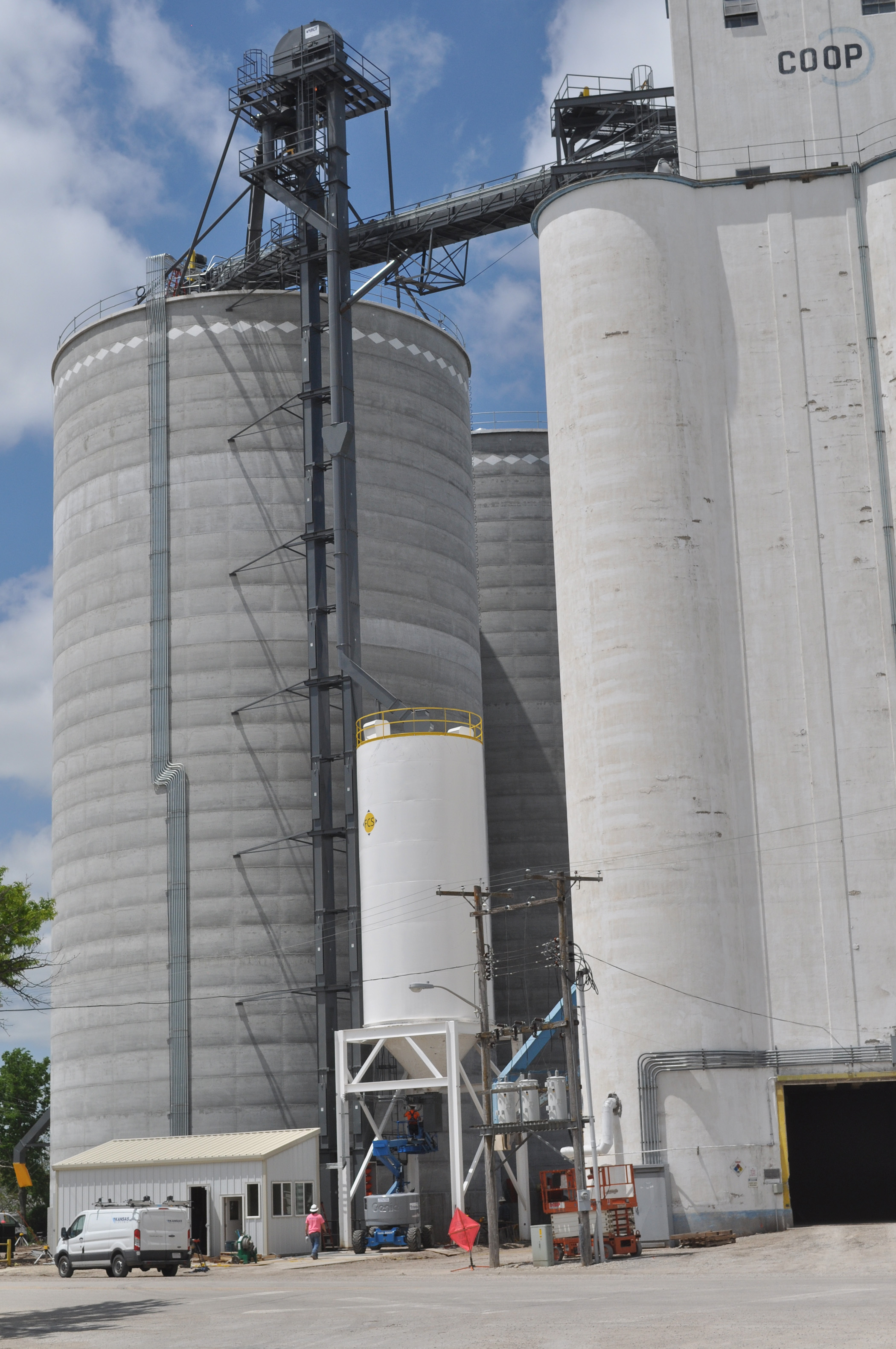