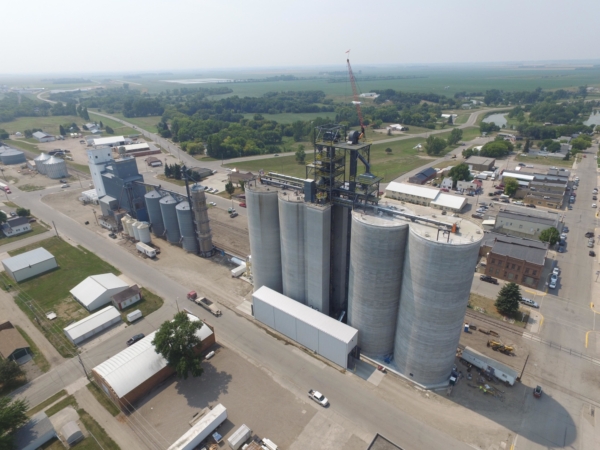 Mayville, ND — There’s something to be said for being able to load an entire 110-car unit train at one location without having to truck grain in from a satellite location during loading to finish the train.

That was the situation at Mayport Farmers Co-op, which loads Burlington Northern Santa Fe Railway (BNSF) trains at its main facility along Second Avenue SE in Mayville, ND (701-786-3017).

“We had only 410,000 bushels of storage on the shuttle site,” says General Manager Jason Parenteau, who joined Mayport Farmers in September 2018 after working for Larson Grain Co. in LaMoure, ND.

So in 2017, the coop board approved a plan to add two slipform concrete tanks to the two that already were standing on Second Avenue plus a pair of high-capacity gravity screeners. In addition, Mayport Farmers upgraded dust collection systems at the site and added new inbound and outbound automated truck scales.

“Vigen built the initial two tanks (at the Second Avenue facility),” says Parenteau. “They’re known as the premier slipform concrete builder in the area, and they’re located close to us. They were very professional, neat, and clean during the construction.”

Work began in September 2017, and the new portions of the facility began operation in mid-summer 2018

The two new tanks stand 60 feet in diameter and 140 feet tall, holding 260,000 bushels each. They are outfitted with 16-inch Springland sweep augers and level indicators supplied by Hope Electric, but no grain temperature cables. “We have a fast turnaround with all the trains we load,” says Operations Manager Dale Baldock, who has been with the cooperative for 24 years.

A pair of Airlanco 20-hp centrifugal fans per tank provide 1/10 cfm per bushel of aeration through in-floor ducting.

Upgraded grain receiving operations begin with a new 125-foot Rice Lake pitless inbound truck scale located a quarter mile away at Mayport’s east elevator at the east edge of Mayville on State Highway 200 adjacent to the facility’s office building. A Pcard reader and Gamet Apollo truck probe is located just ahead of the scale. All scale operations are under the operation of a Prairie Scale Systems scale automation system, which interfaces with the cooperative’s AgVance grain accounting system.

After trucks are weighed and sampled, they are routed to Second Avenue to a new 200-bushel enclosed receiving pit. The pit feeds into a 40,000-bph Schlagel receiving and loadout leg outfitted with two rows of Tapco 20x10 heavy-duty buckets mounted on a 45-inch Continental Pathfinder belt. A new Schenck Process dust collection system gathers dust from that pit, as well from as the rest of the slipfrom facility.

The leg deposits grain into a three-way valve that gives the operator the option of running the grain through one of two GSI/InterSystems 40,000-bph gravity screeners. After that, grain drops into an eight-hole Schlagel distributor, which sends grain out to storage via Schlagel 40,000-bph drag conveyors.

Grain is unloaded from storage onto a Hi Roller 60,000-bph below-ground enclosed belt conveyor running back to the new leg. This leg plus the facility’s other existing legs potentially can load railcars at up to 80,000-bph through an existing bulkweigher housed inside the slip.

The project also included the installation of a Fall Protection Systems trolley unit running the length of three railcars.

Baldock comments that since the project ended, the time to load 110 cars has decreased from 17-18 hours to 9-10 hours. 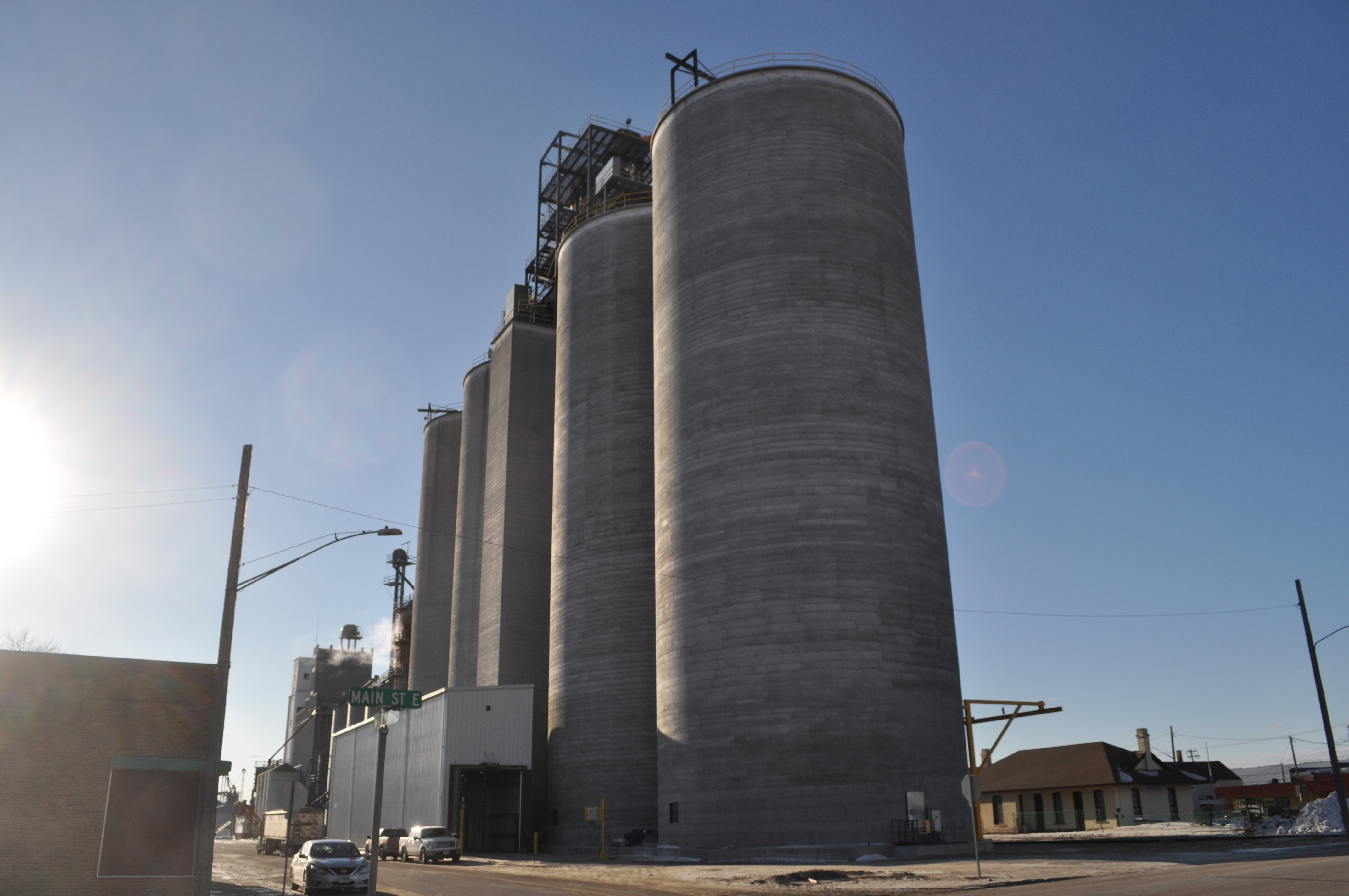 Ground level view of the Second Avenue rail terminal with two new 260,000-bushel slipform concrete tanks in the foreground and new receiving pit to the left of them.​ 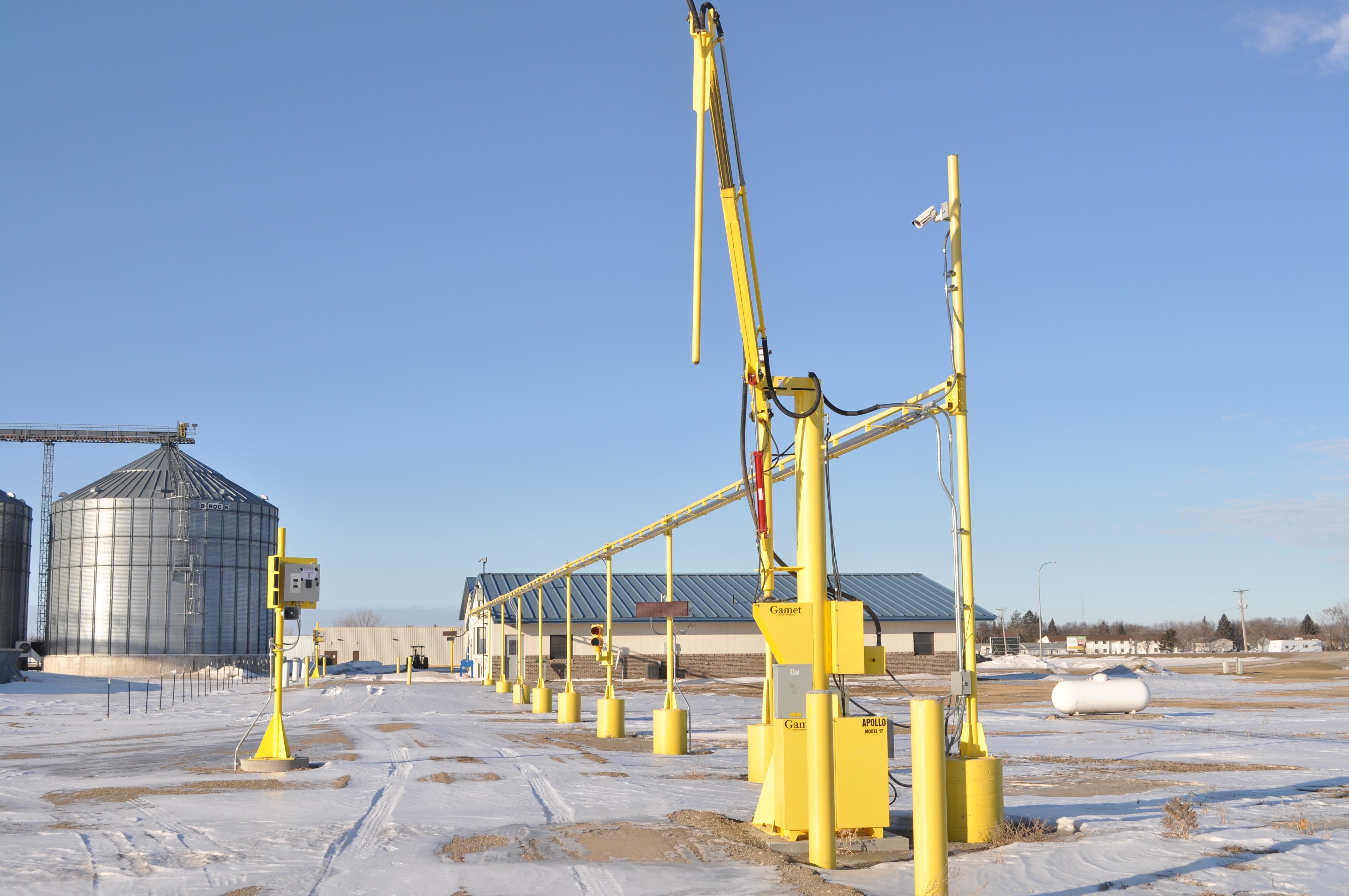