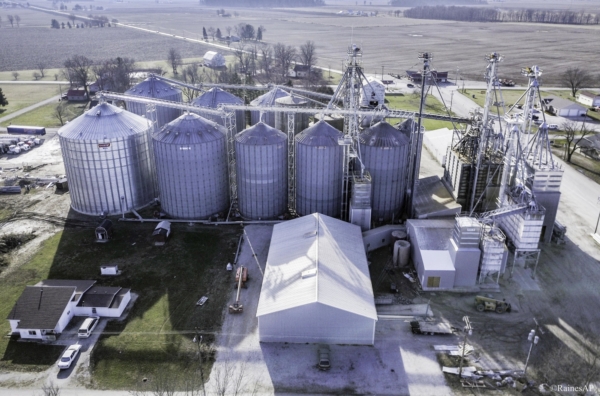 Aerial view of the Matthews Feed & Grain elevator and feed mill in Matthews, IN.

Matthews, IN — Matthews Feed & Grain, a farmer-owned C corporation in Matthews, IN (765-998-2743), had not done a major expansion at its single east-central Indiana location since 1994.

With its 100th anniversary in business coming up in 2020, it was a good time to take a look at some shiny new grain storage and equipment.

“We’ve been having to ship out a lot of grain for lack of space,” says General Manager Curt Thieleke, who has been with Matthews since 1995. “We also wanted some higher-capacity conveyors.”

So in 2018, the company added a new Chief 254,000-bushel corrugated steel tank at the east end of a row of grain storage tanks; upgraded the capacity of both fill and reclaim conveyors; and added a 5,000-bph jump leg serving the facility’s feed mill, also primarily with Chief equipment.

“We had purchased a Chief conveyor in the past,” Thieleke says. “We liked it, and they last a long time.”

“Yagel has done some on-farm setups around our area,” Thieleke explains. “A couple of the farmers on our board of directors used Yagel for on-farm projects, and they were satisfied with the work.”

Work on the project began around May 1, 2018, and it was completed by late July.

The new Chief tank stands about 75 feet in diameter, 64 feet tall at the eave, and 84 feet tall at the peak. The tank has outside stiffeners, flat concrete floor, two sidedraw spouts and a 3,000-bph Daay paddle sweep. However, there are no grain temperature cables or level indicators, since the grain stored here goes directly into the feed mill for processing.

The tank is equipped, however, with a pair of Caldwell 25-hp centrifugal fans supplying 1/7 cfm per bushel with two roof exhausters.

Old 4,400-bph overhead conveyors running out to storage from the receiving leg were replaced with a set of Chief 6,000-bph drag conveyors. The conveyors are supported by a Chief 4-foot-x-8-foot-x-70-foot support tower.

The new tank and two others empty onto a set of Chief above-ground incline conveyors rated at 4,500 bph.

These carry grain to a 5,000-bph Chief jump leg outfitted with Maxi-Lift 12x6 TigerTuff buckets mounted on a 13-inch belt. The leg delivers corn to the appropriate square bin inside the feed mill. 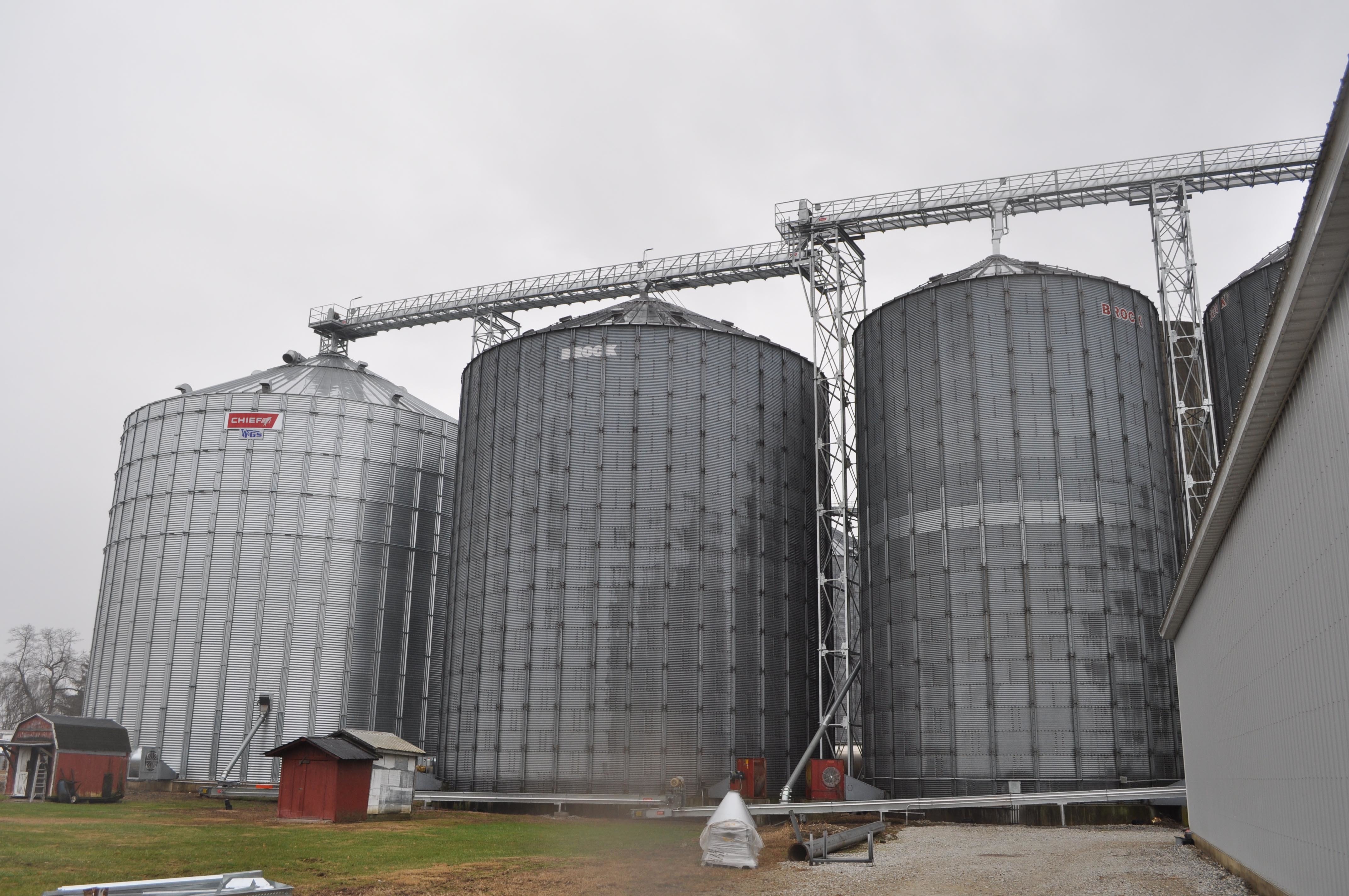 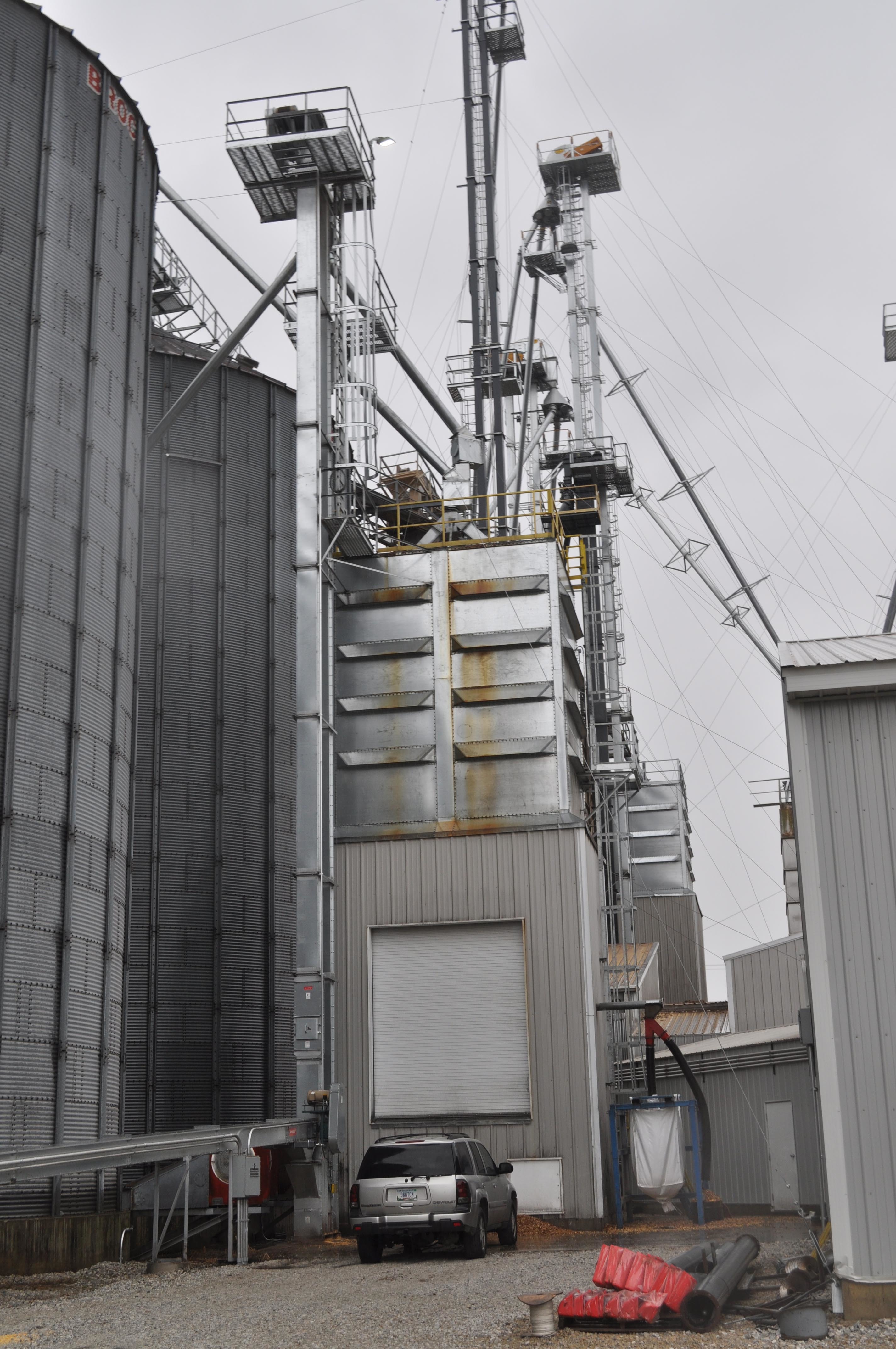