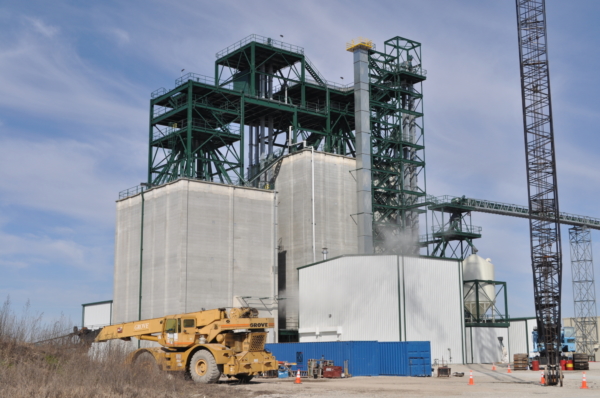 MOWEAQUA, Ill. - Legacy Grain Cooperative had decided in 2017 to increase receiving and storage capacity at its branch elevator in Moweaqua, IL (217-768-4416). However, there wasn’t any more room to expand at the facility’s downtown location.

Fortunately, the cooperative had most of the space it needed a quarter mile to the north on West Cedar Street, says General Manager Kevin Walker. (Walker came to Stonington Cooperative in 2010 prior to the 2013 merger with Moweaqua Farmers Elevator that created Legacy Grain.)

The former Moweaqua Farmers had purchased land there in the 1990s, which had a fertilizer plant on it. In 2005, the coop tore down that plant, but it still operates an 880,000-bushel hoop building for flat storage that was built at the site in 2006.

At this site, the coop in 2017 built a 1.14-million-bushel remote steel annex, intended primarily for soybeans, adjacent to the hoop building. The coop also installed a remote outbound truck scale, as well.

The coop took bids and awarded the contract to Cleveland Grain Systems, Inc., Mount Zion, IL (800-313-2603). “I’ve worked with them before,” Walker says. “They put up two 78-foot-diameter tanks and a dryer at our Blue Mound (IL) location.”

Other major subcontractors on the project:

The leg deposits grain into a four-duct Schlagel rotary distributor, which in turn, sends grain out to storage via GSI overhead 20,000-bph drag conveyors.

Both tanks have sidedraw spouts for truck loading. When grain falls below that level, they empty onto GSI 10,000-bph drag conveyors in above-ground 6-foot-tall tunnels. These run back to the receiving leg.

Southern IL Scale installed a 70-foot Fairbanks pitless outbound truck scale on the opposite side of the hoop building from the annex. In addition, Southern IL Scale designed a kiosk terminal next to the scale, and Grossman & Associates installed its scale automation software.