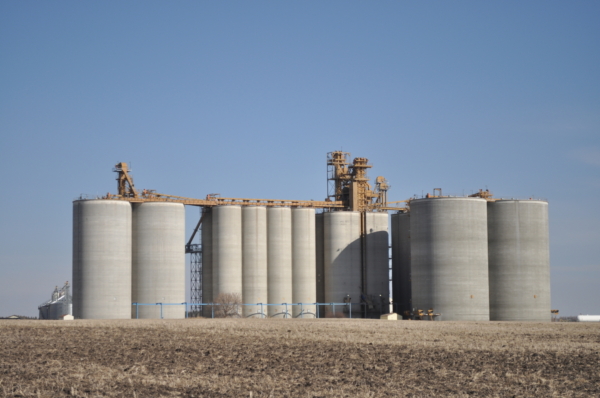 A merger in 2019 between two north central North Dakota cooperatives resulted in the need to add a million bushels of upright concrete storage at the new cooperative’s headquarters and rail terminal to handle the additional volume of grain.

The Bisbee terminal is on the Northern Plains Railroad, a short-line, but the Burlington Northern Santa Fe Railway (BNSF) has trackage rights into Bisbee, says Legacy CEO and General Manager Sean Slowinski. He’s been with North Central and now Legacy for nearly nine years; prior to that, he worked for Greenway Cooperative in Rochester, MN.

The cooperative ships all of its soybeans and some of its hard red spring (HRS) wheat to the Pacific Northwest for export. The rest of its wheat goes to eastern mills. And like a lot of grain handlers on the Northern Plains, Legacy handles a variety of other crops, including canola, barley, flaxseed, sunflowerseed, oats, pinto beans, and field peas, any of which may or may not see the inside of a railcar.

Slowinski estimates that annual volume for the newly combined coop might run 21 million to 22 million bushels a year.

Both of the original cooperatives went into the merger planning on expanding storage capacity “We wanted the capacity to get our crops to the rail loadout quickly,” Slowinski says. “We have an overlap of crops being harvested. This last year (2020), we were still finishing up wheat and canola and already starting to take in soybeans.”

Early in 2019, Legacy awarded a contract to build the new storage to Vigen Construction, Inc., East Grand Forks, MN (218-773-1159) to be the general contractor and millwright on the project.

“Vigen has built all of our concrete silos here at Bisbee, a total of 24, dating back to the original elevator in 1987,” says Slowinski.

Construction began as soon as weather allowed in the spring of 2019. The cooperative began taking grain in the new tanks in October 2019, though some electrical work extended into the first quarter of 2020.

Vigen constructed two 500,000-bushel slipform concrete tanks situated to the south of the east end of existing storage. Currently, they are holding soybeans.

“So far, everything is working flawlessly,” Slowinski says.

- From the March/April 2021 Grain Journal