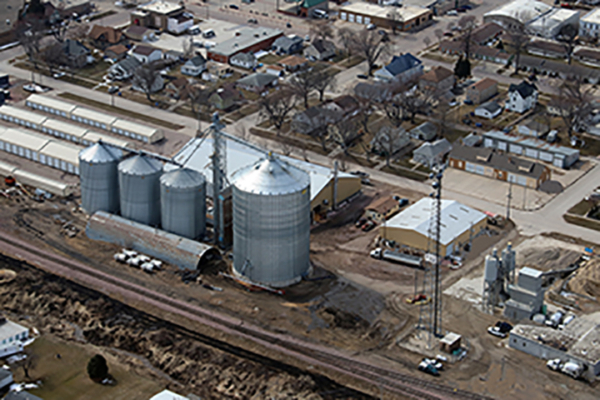 Le Mars, IA — It’s hard to think of it as a problem, exactly, but Le Mars Agri-Center Inc., a privately-held grain handler in Le Mars, IA, needed to find a way to handle another 1 million bushels of grain during the upcoming 2017 harvest.

Figuring two turns or a little more during a normal harvest season in northwest Iowa, says General Manager and Merchandiser Brian Harpenau, who has held that title since 2003, translates into a medium-to-large 90-foot-diameter steel tank.

There was little space left at the in-town headquarters elevator on First Avenue SW for such a tank, but the company was operating a second location a few blocks to the northeast. That was in-town, too, but with a little more space for expansion, Harpenau says.

During 2017, Le Mars Agri-Center spent $1 million to construct a 410,000-bushel corrugated steel tank and an inbound, outbound truck scale at the site.

To construct the project, Le Mars hired Dacotah Grain Systems, then located relatively nearby in Hull, IA (712-348-2888). (Dacotah since then has relocated to Colorado but remains in the grain construction business.)

“This is the first time we’ve had a contract with Dacotah, but they performed very well for us,” says Harpenau. Construction got underway around April 1 and was completed in time for harvest on Oct. 1.

A pair of Sioux Steel 50-hp centrifgugal fans provide 1/10 cfm per bushel of aeration through in-floor ducting with the assistance of six powered roof exhausters.

Grain reaches the new tank via an existing 10,000-bph leg and distributor, which deposits it onto a new 10,000-bph overhead D-Line drag conveyor running out to the tank. (The same leg serves the rest of the elevator, as well.)

Below the level of the sidedraws, the tank empties onto a 7,500-bph above-ground D-Line drag conveyor, which runs out to an incline truck-loading auger.

Plans call for the addition of a second, similarly-sized steel tank and an overhead truck-loading surge bin, possibly in 2019, says Harpenau.