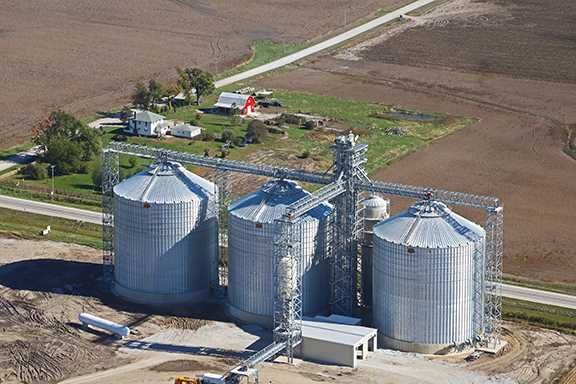 Landus Cooperative’s new 3-million-bushel truck elevator near the edge of Collins, IA includes an 800,000-bushel temporary storage pile (foreground) that dates back to 2008.

Collins, IA — Long before there was a grain elevator at the intersection of U.S. Highway 65 and State Highway 210 just south of Collins, IA, the former FC Cooperative operated a single 800,000-bushel temporary storage pile constructed on the site in 2008.

“The temporary pile has served us very well, but we were trucking 1.3 or 1.4 million bushels out of the area every year,” says Bell, who came to Landus Cooperative from Cargill at the time of the merger. “We already had the land, so it made sense to build more storage space here. We’re mainly using this location to ship grain to our rail loader in Pleasant Hill (a suburb of Des Moines, IA about 30 miles away). The rest goes to local processors.”

“They demonstrated to us the ability to deliver the project on time and, of particular importance to Landus Cooperative, safely, and the cost was competitive,” says Bell.

Other contractors on the project:

Work on the elevator began in March 17. When Grain Journal visited the site in mid-October, some electrical work remained to be completed, but the elevator had been receiving grain since Oct. 2.

Keen Project Solutions with Global Bin Builders erected a set of three GSI corrugated steel tanks holding 750,000 bushels each. The 105-foot-diameter tanks stand 93-1/2 feet tall at the eaves and a little under 122 feet tall at the peaks.

A set of six 60-hp Rolfes@Boone centrifugal fans deliver 1/7 cfm per bushel worth of aeration on corn through in-floor ducting with fifteen 2-hp roof exhausters per tank.

Incoming loads of grain arriving by truck are sampled with an existing InterSystems probe then proceed to a Rice Lake 14-foot-x-80-foot pitless, above-ground inbound scale installed by Siouxland Scale Service Inc. under the control of a Proceres oneWeighTM scale automation system.

Both the inbound and identical outbound scale are located adjacent to the single-story facility office building and lab. The building has a wood frame and prefabricated metal walls. According to Location Manager Jason Lemmert – who has been with the cooperative for 18 years, the first 16 on the FC Cooperative side – says the structure is the first office building of its design in the Landus Cooperative system and is likely to become a prototype for future construction projects.

After the loads are weighed and graded, drivers proceed to an enclosed receiving pit structure with two 1,600-bushel mechanical pits. Lemmert comments that the pits measure 10 feet by 27 feet, large enough to take in grain from both outlets on a semi-truck simultaneously. Both pits are outfitted with Donaldson Torit dust collectors to keep dust levels in check during operations.

The pits feed a system of Global Fabrication 20,000-bph conveyors, which then feed a pair of InterSystems 20,000-bph legs outfitted with 4B 20x8 heavy-duty buckets mounted on 22-inch Continental belts.

The legs deposit grain into a Schlagel 12-inlet rotary double distributor. From the distributor, grain is carried out to steel storage or the ground pile via overhead 40,000-bph Global Fabrication drag conveyors and bridges, which span 140 feet over the steel tanks. All receiving is encased by a 20-foot-x-26-foot-x-175-foot Global Fabrication tower constructed of more than 225,000 pounds of steel.

The tanks empty onto a pair of 20,000-bph Global Fabrication drag conveyors in above-ground tunnels. These run back to one of the two receiving legs and up to the distributor.

The facility also includes a liquid propane-fired, 7,000-bph Zimmerman tower dryer. The dryer is serviced by a pair of InterSystems 15,000-bph wet and dry legs. The dry leg deposits grain into a 4-duct Schlagel Synchroset distributor, which then sends grain to storage.

In keeping with Landus Cooperative’s safety focus, Lemmert says, the Collins elevator has a number of features that improve safety: