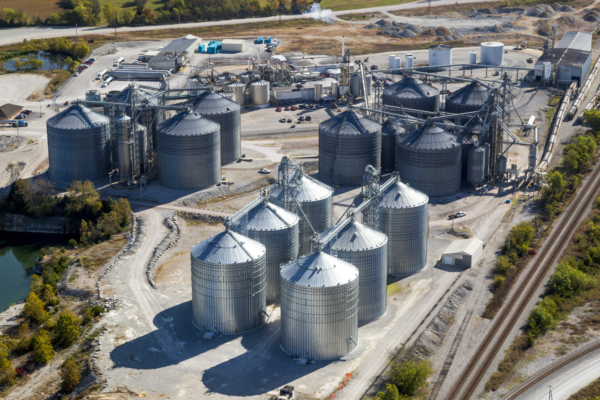 Hopkinsville, KY - Hopkinsville Elevator Co. Inc. has been expanding its Casky elevator complex, about five miles southeast of Hopkinsville, KY, into a huge 10-million-bushel steel tank complex in recent years. Much of that is devoted to corn storage for an adjacent ethanol plant run by the company’s Commonwealth Agri-Energy subsidiary.

But the elevator also handles a great deal of western Kentucky’s significant soft red winter wheat crop. That was the primary purpose for the company to install a pair of 576,000-bushel Chief Agri tanks in 2019, says General Manager Eston Glover III, who has spent his entire 21-year grain industry career at Hopkinsville Elevator.

“About half of our wheat goes to Siemer Milling Co. here in Hopkinsville,” he says. “Much of the rest is loaded onto barges at our Cumberland River terminal in Clarksville, TN, and sent down the river for export.”

Two-phase project. The two newest tanks represent the second of a two-phase project started in 2018. That first phase included a pair of 525,000-bushel Brock tanks (90-foot diameter by 88-foot eaves and 112 feet at the peaks) served by a new receiving pit feeding a 20,000-bph AGI Union Iron leg and 20,000-bph drag conveyors.

The main reason for the switch to Chief Agri tanks in the 2019 project, Glover explains, is that the contract for an undisclosed sum was awarded after a bidding process to CT Grain Systems LLC, Lewisburg, KY (270-893-0013), a Chief Agri dealer. “They did a great job, breaking ground in January 2019 and finishing in July,” he says.

The 2019 tanks stand 92 feet 10 inches in diameter, 91 feet 11 inches at the eaves, and 117 feet 7 inches at the peaks. They have flat floors, outside stiffeners, Daay bin paddle sweeps, and Bindicator level indicators, but do not include grain temperature monitoring. A set of four 50-hp Chief Agri-Caldwell centrifugal fans per tank deliver 1/9 cfm per bushel through in-floor ducting in a Quad F pattern.

The tanks have sidedraws and then finish emptying onto Chief Agri 20,000- and 15,000-bph drag conveyors, respectively, in below-ground tunnels.