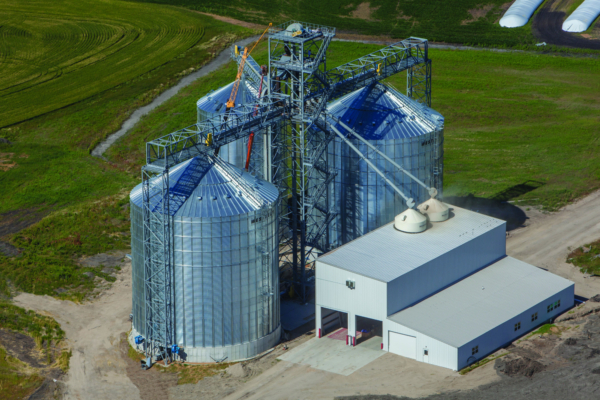 Hallock, MN — At more than a century old, Hallock Coop Elevator Co. had always operated as a single-location coop. In 2016 that location was a roughly 650,000-bushel grain elevator in the middle of Hallock, MN.

General Manager Zach Beaudry says with bigger harvest equipment and higher yields, Hallock Coop had a need for more storage, but portions of the community were resistant to an expansion inside town. So the company decided to build an elevator at a new site in the countryside five miles south along U.S. Highway 75 and a Burlington Northern Santa Fe main line.

As the new 650,000-bushel, all-steel elevator was nearing completion late in June, Beaudry, who has been with the coop for 10 years, told Grain Journal that the facility will be strictly a truck-loader for now. But there is thought of adding rail loading capacity with BNSF so close by.

“If it takes 10 years, it takes 10 years,” he said, noting that continuing to serve members with up-to-date, high-speed grain handling equipment is a necessity, if the 120-member cooperative is to remain independent.

Construction began in the summer of 2016 and was hampered by weather. One tank was in operation to take in grain during the 2017 harvest. Completion of the whole facility was expected by Aug. 1.

• A 48-foot-diameter Centurion tank, intended primarily though not exclusively as a wet tank, also stands 66 feet tall at the eave and 86-1/2 feet tall at the peak. It is outfitted similarly to the larger tanks but with an Easycheck grain monitoring system and two Airlanco 10-hp fans achieve the needed 1/7 cfm per bushel on corn with two 2-hp roof exhausters.

Truck traffic on the property uses a 120-foot Rice Lake inbound-outbound pitless scale with automation designed by Rooster Tech and an adjacent scale ticket printer. From there, trucks proceed to a 300-foot mechanical receiving pit enclosed in a combination steel receiving shed and office structure.

The tanks have no sidedraws, so all of their contents are emptied into Union Iron 20,000-bph above-ground drag conveyors for reclaim running back to the receiving leg. The distributor can send grain via gravity spout to a pair of 5,000-bushel Meridian surge tanks atop the receiving shed for truck loading.

The distributor also can reach a 1,250-bph GSI propane-fired tower dryer via gravity spout. The dryer had not been used as of mid-July.