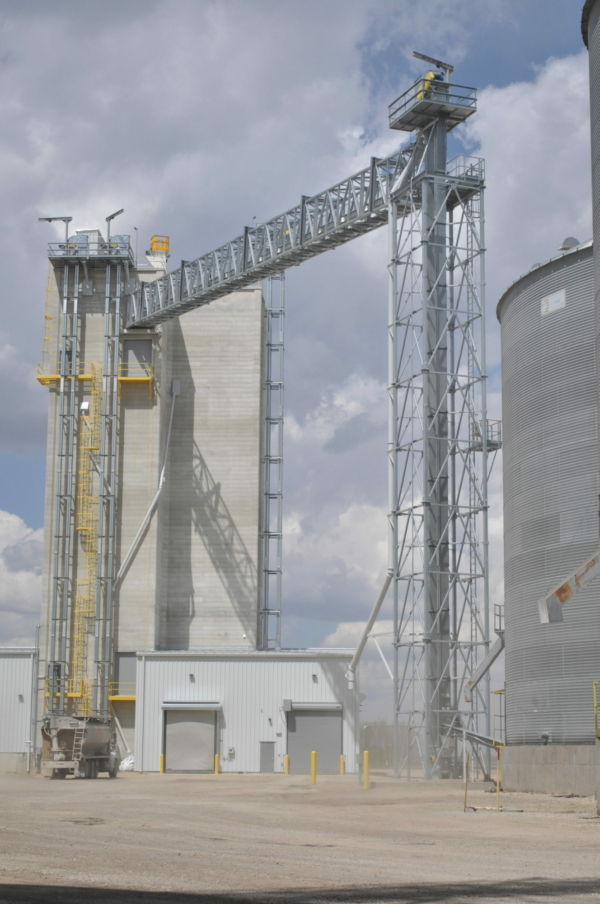 New 1,200-1,400-tpd slipform concrete feed mill at Five Star Cooperative in New Hampton, IA. To the right is a 5,000-bph GSI InterSystems leg and drag conveyor carrying corn to the mill from an adjacent grain elevator.

Five Star Cooperative had been operating a swine feed mill at its headquarters elevator at the north end of New Hampton, IA since 1965. Now more than 55 years later, the mill was wearing out.

“We were at capacity, and there was no room for growth,” says Jeff Hageman, assistant feed department manager and head of the cooperative’s food safety plan. “We knew where we were at capacity. Another five to 10 years, and we would be out of production in New Hampton with the old mill showing its age daily.”

Hageman, who came to Five Star 14 years ago from a manufacturing company in Decorah, IA, says planning for a new 1,200- to 1,400-tpd mill at New Hampton started about three years ago. There was no thought of building elsewhere, since the cooperative also operates a 3.66-million-bushel elevator on the site, so a corn supply was already available.

Ground broke for the mill in September 2019, and feed production began in December 2020. Production at the old mill is winding down.

The new feed mill near the north end of the property is a slipform concrete structure standing 135 feet tall on a 50-foot-x-75-foot footprint.

The concrete structure includes a total of 18 ingredient bins holding approximately1,400 tons total plus 16 finished feed bins holding 32 tons each. The mill is set up to receive ingredients at 140 tph. All milling operations are under a batching system from Easy Automation.

Corn is transported from the elevator next door to the feed mill via a 5,000-bph GSI InterSystems leg outfitted with a single row of Maxi-Lift 12x8 buckets mounted on a 14-inch belt, then via an overhead GSI InterSystems drag conveyor to the top of the mill structure.

Corn then is ground on a pair of Lone Star triple-stacked roller mills. One of them, rated at 50 tph, was moved over from the old feed mill, and the other, at 75 tph, is new. The smaller roller mill is dedicated to coarse grinds, while the larger produces finer grinds.

Ingredients are weighed on a Tom-Cin Metals batching scale, then mixed in a 5-ton Scott high-speed twin-shaft mixer with an average mixing time of 100 to 120 seconds. The mixer has a capacity of 75 tph, but Hageman explains that 50 tph is a more common running speed, as the feed mill produces a lot of small batches with frequent hand-fed ingredients.

No pelleting is done at New Hampton at this time. Bulk feeds are loaded through a single 16-ton C&A Scales weigh hopper scale. Five Star operates its own truck fleet of eight semis and two straight trucks operating within about a 100-mile radius of New Hampton.