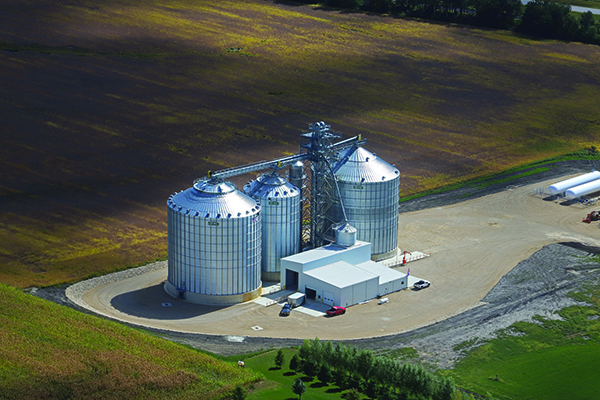 Newly expanded Five Star Cooperative country elevator at the edge of Lawler, IA now has more than 730,000 bushels of storage capacity and a new dryer. Aerial photo by

It was the first step in moving the Lawler elevator out of its in-town location in a residential neighborhood to something more beneficial to both farmers and town residents, says Tony Myers, operations manager and safety director at Five Star. (Myers has been with the cooperative for six years.)

“The in-town facility is nearly 50 years old,” he comments.

In 2020, Phase 2 of construction completed the new elevator with the addition of another 420,000 bushels of upright storage; a new dump-through truck scale with pit and receiving leg; tower dryer; and office building. An older scale on the site is no longer in use, and an adjacent truck probe has been moved in front of the new scale.

Construction broke ground in March 2020 on the roughly $3 million project, and the expanded facility was ready to receive grain just as harvest was starting up in northeast Iowa in mid to late September.

Myers notes that the hillside location along a smooth paved road northeast of Lawler had a very high water table, and a lot of excavation and storm drainage tiling was required. Blazek Construction, Lawler (563-238-7150), performed the excavation and installed drainage.

“We have a lot of experience with Sukup products,” says Myers. “It’s high-quality, the price is reasonable, and they’re also a local company for us.”

Among the other participants in the Phase 2 expansion:

Storage added during Phase 2 included two Sukup steel tanks – a 308,000-bushel tank for dry corn and a 112,000-bushel wet tank. Both tanks have custom roofs with up to 100,000-pound load-bearing capacity.

The dry tank is identical to the 2016 tank standing 78 feet in diameter, 70 feet tall at the eave, and 89 feet 10 inches at the peak. It has a flat floor, outside stiffeners, sidedraw spout, a 5,000-bph Sukup zero-entry paddle sweep, and 14-cable TSGC grain temperature monitoring system. The paddle sweep has conveniently placed controls on the outside of the stem wall.

A pair of Sukup 40-hp centrifugal fans provide 1/7 cfm per bushel of aeration through a flush-floor system.

The old truck scale that was installed in 2016 has been replaced by a Cardinal Mfg. enclosed 87-foot-long dump through truck scale housed in a steel building that also contains the facility office. Truckers must climb about three feet to get onto the scale.

This was necessary to site the dump-through directly over an existing 800-bushel mechanical receiving pit, says Location Manager Dennis Lau, a 12-year veteran at Five Star. An existing Probe-A-Load truck probe was moved from the old scale to the new scale.

The pit feeds a Sukup 15,000-bph receiving leg equipped with a single row of Maxi-Lift 18x8 TigerTuff buckets mounted on a 20-inch belt on 9-inch centers supplied by Maxi-Lift.

The leg deposits grain into a Schlagel swing-set, dual-inlet, four-duct distributor. From there, grain is sent to storage via Sukup overhead 20,000-bph drag conveyors or via gravity spout to the dryer. Lau notes that the fill conveyors have a higher capacity than the receiving leg so they can accommodate grain from both the receiving leg and a dry leg from the dryer.

The Sukup tower dryer is fueled from a pair of 6,000-gallon liquid propane tanks and has a capacity of 2,700 bph at five points of moisture removal. It empties into a Sukup 5,000-bph wet leg equipped with Maxi-Lift 13x7 TigerTuff buckets on 9-inch centers on a 15-inch belt.