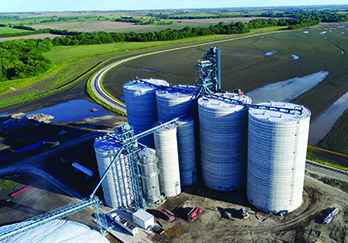 Frankfort, KS — In mid-April when Grain Journal paid a visit, Farmers Cooperative’s new 4.1-million-bushel rail terminal in Frankfort, KS (785-292-4403), was a month from completion but had been receiving grain since the 2016 harvest. Loading the first 110-car unit train on the Union Pacific was about a month away, but the 8,000-foot loop track was in place and ready to go.

The coop’s second rail-loading facility in northeast Kansas was, at least in part, the product of a merger between Farmers Cooperative, Dorchester, NE and Beattie Farmers Cooperative, Beattie, KS, finalized in September 2016. But Ernie Hroch, regional manager with Farmers Cooperative, says his employer had been eyeing the area for several years for a rail terminal. (Hroch has been with the coop for 35 years, most recently managing its other Kansas rail loader in Hanover, nearly 40 miles to the northwest.)

“This is a very good marketing area, and it hasn’t been served by a rail terminal,” says Hroch. “The Tuttle Creek valley has productive soils, and the area gets adequate rainfall for potentially large crops.”

Despite these advantages, the site of the terminal at the west end of Frankfort had its challenges. The biggest of these was its location on a flood plain. Farmers Coop had to get a permit from the U.S. Army Corps of Engineers before construction could proceed. The flood plain also affected the facility design, with requirements for extensive auger cast piling and keeping reclaim equipment above-ground.

Infrastructure upgrades also were needed. The coop paid for upgrading Utah Road, a new blacktop connecting to State Highway 99, about half a mile away.

For building the $30 million terminal, Farmers Coop awarded the job to Frisbie Construction Co. Inc., Gypsum, KS (785-536-4288), as contractor, consultant, designer, and millwright. “They do a large percentage of our construction work,” Hroch comments.

Groundbreaking took place with the help of Olsson & Associates in September 2015, and rail loading was scheduled to begin in May 2017.

Upright storage at Frankfort consists of four tanks rated at 682,780 bushels for long-term holding, a 238,848-bushel tank for wet grains, and two 72,390-bushel tanks for blending and reclaim purposes.

The wet tank stands 60 feet in diameter and 96 feet tall. It has a flat floor, 16-cable temperature system, Behlen zero-entry sweep auger, but no level indicators. It has the same four 50-hp fans as the big tanks, but because of the wet tank’s smaller size, they deliver 1/7 cfm per bushel.

The two smaller tanks stand 34 feet in diameter by 116 feet tall. These have built-in steel hopper bottoms for zero-entry cleanout, with Abel electric gates for blending. There is no grain temperature monitoring or aeration in these.

In addition to the upright storage, storage includes a 1.1-million-bushel, 270-foot-diameter LeMar temporary storage pile with a center fill tower fed by a 32,000-bph Hi-Roller enclosed belt conveyor from any of the receiving legs. The unit has 6-foot perforated steel sidewalls and a packed floor consisting of a blend of Portland cement and fly ash. Four 60-hp AIRLANCO centrifugal fans atop the center tower hold the tarp in place; the fans have variable frequency drives to vary their speed according to ambient wind speeds as measured by an anemometer.

Incoming trucks are routed past a CR Mfg. truck probe, which delivers grain to the facility’s single-story office building via underground pneumatic pipe. While the sample is graded, trucks move up to a 80-foot Rice Lake pitless inbound-outbound scale for weighing. Drivers utilize tag readers supplied by C&A Scales with Cultura software.

Trucks then proceed to one of three roughly 1,000-bushel mechanical receiving pits. Two of pits feed the Schlagel legs via 17,000-bph Hi-Roller enclosed belt conveyors and the other pit feeds a Schlagel 15,000-bph leg via a Schlagel 15,000-bph drag conveyor and transfer conveyor. The two larger legs are equipped with Tapco 20x8 heavy-duty buckets mounted on a 22-inch Goodyear belt; the smaller leg has 18x8 buckets.

A series of 17,000-bph Schlagel overhead fill drag conveyors take grain out to the big tanks. The tanks empty onto a Hi Roller 60,000-bph enclosed belt conveyor running back to the bulkweighing system.

Grain for rail loadout will be sent up a Schlagel 60,000-bph loadout leg equipped with two rows of Maxi-Lift 22x10 Tiger Tuff buckets mounted on a 48-inch Goodyear belt.

The grain then will be loaded onto railcars through a 60,000-bph C&A bulk weigh loadout scale (fed by a 60,000 bph Hi-Roller enclosed belt conveyor) outfitted with a Gamet sampler and under the control of Cultura oneWeigh software. The operator can run a portion of the grain stream through a 40,000-bph InterSystems gravity screener as needed. During loadout operations, workers atop railcars will protect themselves with a trolley unit from Fall Protection Systems running the length of five cars.

The facility also includes a 7,500-bph Zimmerman tower dryer fired by propane. The gravity-loaded dryer empties onto a 17,000-bph Hi Roller belt running back to the receiving pits. 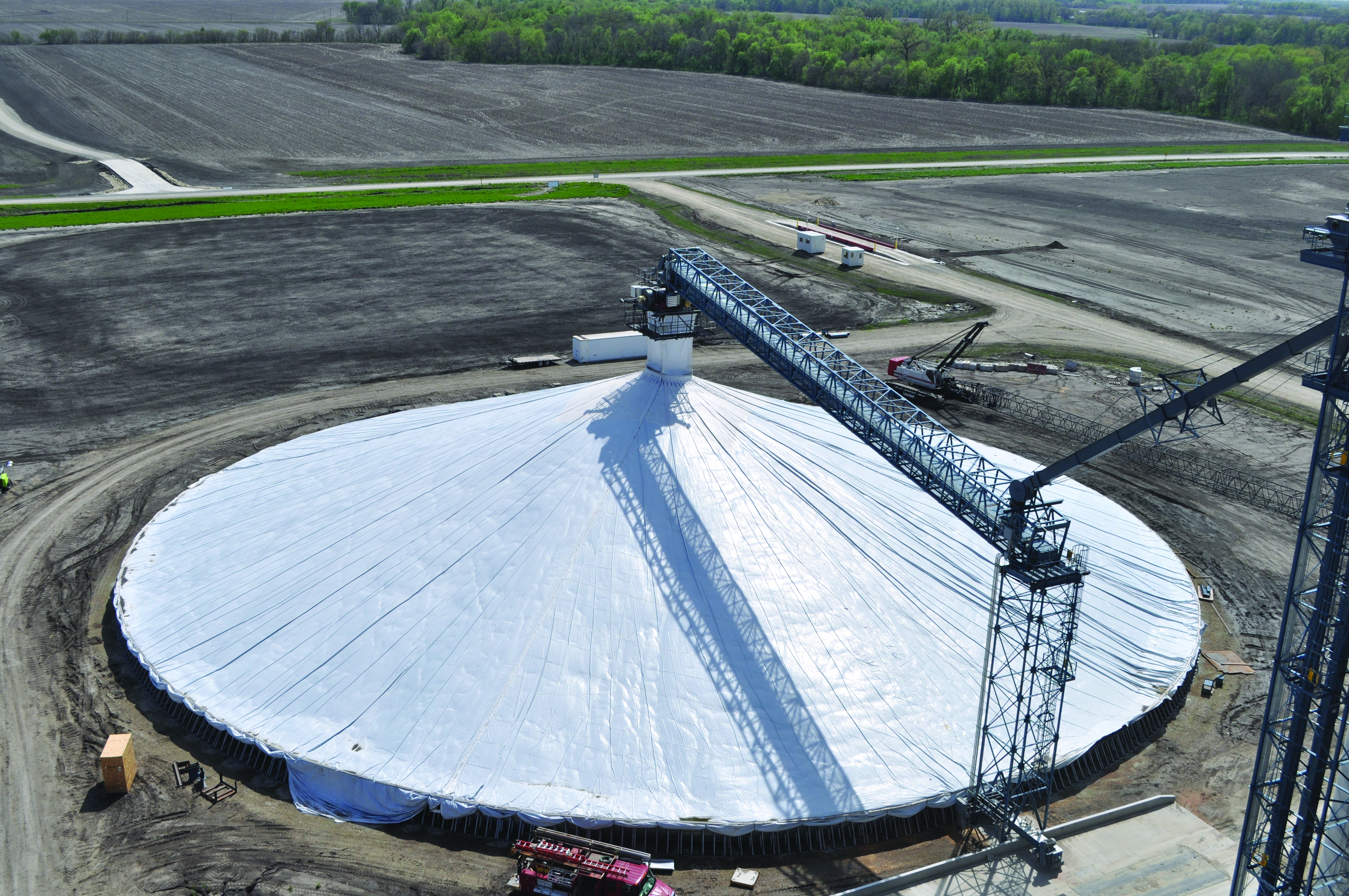