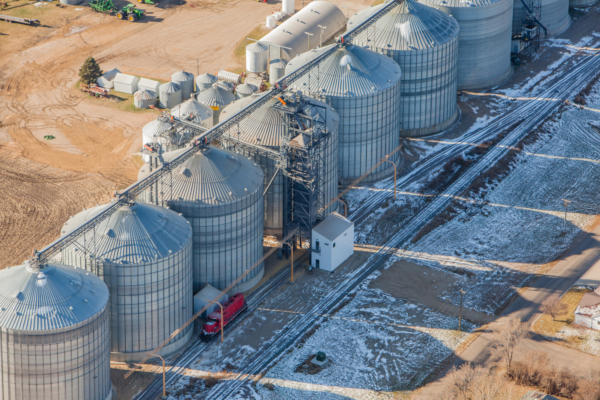 Founded in 1889, what is now Farmers Coop Elevator Co. in Lidgerwood, ND is one of the oldest continually operated farmer cooperatives in the United States.

A century and a quarter later, Farmers Coop remains relatively small by Northern Plains standards, with three grain handling locations, two in Lidgerwood at the north and south ends of town and six miles west at Geneseo, ND.

Many of the upgrades in recent years have been at the south elevator in Lidgerwood, which is the rail loading location for the cooperative. According to General Manager Todd Dravland, who came to Farmers Coop three years ago from Kragnes Farmers Elevator in Dilworth, MN, the coop had been loading shuttle trains on CP Rail and wanted to add Burlington Northern Santa Fe Railway (BNSF), which also had trackage rights to Lidgerwood.

Farmers Coop ships most of its grain – corn, soybeans, and hard red spring wheat – through its terminal to the Pacific Northwest. Much of that grain, especially the soybeans, ends up in China.

Shuttle trains for grain on CP Rail have 100 to 105 railcars holding an approximate total of 370,000 bushels. BNSF trains, with a larger percentage of high-capacity cars than CP Rail, consist of 115 cars and hold 430,000 bushels.

“Gateway, in particular, has been doing projects at Lidgerwood for years, and they have a lot of experience with our facilities,” says Dravland.

Viking added 7,527 feet of track to the south elevator’s railyard, creating enough space to store either a full or an empty unit train. New or refurbished 115-pound track was used to support high-cube capacity railcars. Farmers Coop operates its own switching locomotive to move the cars in and out of the railyard for loading.

Each leg is outfitted with two rows of Maxi-Lift 20x8 Tiger-CC buckets mounted on a Continental 43-inch belt supplied by Applied Power Products. The tower measures 20 feet by 20 feet by 93 feet tall, with service platforms at 47, 69, and 93 feet.

The screeners feed a 80,000-bph Meier bulkweigher that uses a Gamet sampler and loads cars through a hydraulically-operated telescoping spout.

The bulkweigher is under the control of a CompuWeigh GMS 4000 scale control system that reads data from railcar-mounted RFID tags on maximum load and tare weight to control the flow of grain into the car.

Coop workers open hopper car doors ahead of the loadout spout, and after the cars are loaded, grain inspectors close the doors and seal them with office seals from the Federal Grain Inspection Service.

Railcars being loaded can be emptied into a rail pit equipped with a Schlagel 20,000-bph drag conveyor running back to one of the loadout legs.

“We struggled with the first four or five trains,” Dravland says. “Then our contractors got together and pinpointed the problems. Now we are loading a train in 11 hours using 18-car cuts from the railyard and we plan to get that down to 9-1/2 hours.”

Overall elevator operations were upgraded with new automation software from Hope Electric. The system allows employees to operate every piece of equipment from touchscreen workstations throughout the facility.

In addition to these upgrades, the coop installed GSI AgriDry grain spreaders in four of its storage tanks.