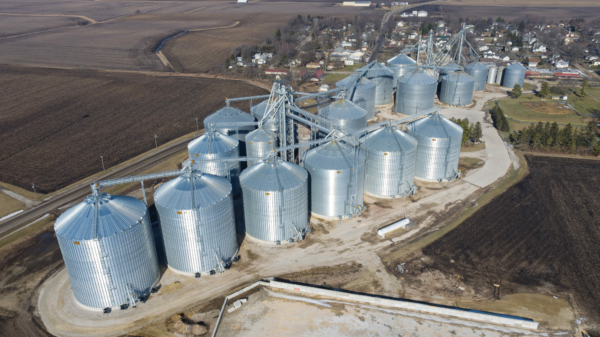 VARNA, Ill. - Farmers Coop Association of Varna, IL (309-463-2061), in 2017 continued to grow its single location near the intersection of State Highways 17 and 89 with the addition of two more corrugated steel grain storage tanks.

Installed in 2017 were two GSI tanks: a 105-foot-diameter tank rated at 788,433 bushels, the largest GSI makes in that diameter, and a 90-foot-diameter tank holding 500,650 bushels. The additions bring storage capacity at the single-location, 650-member cooperative to 12.5 million bushels.

The construction was under the direction of Grain Flo Inc., Heyworth, IL (309-473-2512), which served as general contractor and millwright on the $2.5 million project.

According to General Manager Gerald “Jay” Junker, who joined the cooperative in 1989, the 2017 tanks were the latest in a series of 18 steel tanks Grain Flo has built at Varna dating back to 1991 (see box at right).

“Basically, Grain Flo does all of our construction work,” he says. “They’ve been just wonderful to work with. The project got a late start this year, but everything was up and running by Oct. 5-10, a bit earlier than promised.”