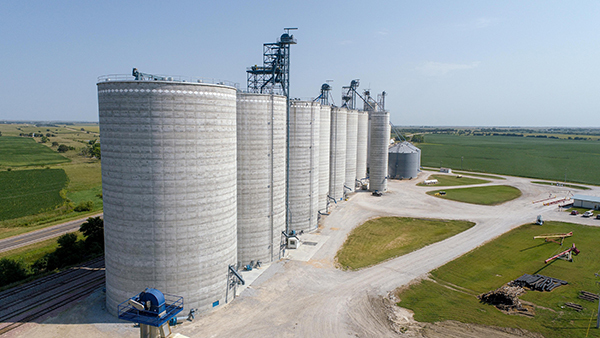 Dorchester, NE — A regional farmer-owned cooperative like Farmers Cooperative (FC), with 41 grain locations in two states, usually has some sort of construction project underway at any given time, either to expand or to replace outdated storage and equipment.

“We continue to add storage and handling capacity,” says Allan Zumpfe, the new president and CEO at the cooperative. Zumpfe came to FC on Sept. 1, 2019, replacing longtime president and CEO, Ron Velder, who retired Nov. 1. Prior to FC, Zumpfe had been CEO at Cooperative Producers Inc. in Hastings, NE for three years and was vice president-grain for Central Valley Ag in York, NE.

In 2020, he says, FC focused on adding concrete storage at three rail terminal locations, all of them on the Union Pacific Railroad (UP) – Jansen, NE; Frankfort, KS; and Hanover, KS. That’s three of FC’s six terminals; one other on the UP and two on the Burlington Northern Santa Fe Railway (BNSF).

FC likes concrete storage at rail locations for its durability under conditions of frequent turns. The majority of the cooperative’s concrete storage are jumpform tanks constructed by McPherson Concrete Storage Systems, McPherson, KS (800-999-8151); the ring of white diamonds around the top of the tanks is a familiar sight throughout the central plains.

“Frisbie has done a lot of projects for us, at least 35, so there’s a strong comfort factor there,” says Grain Manager Dale Hayek, who has been with FC for 32 years.

Construction started immediately after 2019 harvest at Jansen first; all three locations were either completely finished or within a week or so of being done when Grain Journal visited in late August 2020.

All three projects were very similar, except for the overall size of the three tanks. Each tank has a flat floor and a 10,000-bph Prairie Land Millwright BinGator paddle sweep.

“That’s the largest tank we could fit into that footprint,” says Hayek. “There’s a fertilizer shed in the way of anything larger, though if we need more storage in the future, we could extend a row of tanks to the south.”

The tank includes a BinMaster level indicator, an 18-cable Rolfes@Boone grain temperature monitoring system, and a sidedraw spout for truck loading, though the Jansen elevator is designed primarily for train loading. A set of four AGI Airlanco 60-hp centrifugal fans provide 1/10.3 cfm per bushel of aeration through in-floor ducting.

Hanover location has largest of the three tanks

“We had been piling a lot of grain on the ground,” Hayek says. “Hopefully, the new tank will mean we won’t have to rely as much on the railroad for our logistics.”

The Hanover tank is outfitted similarly to the Jansen tank, though with a Rolfes@Boone 23-cable grain temperature monitoring system and six 75-hp centrifugal fans supplying 1/9 cfm per bushel of aeration.

Similarly to Jansen, the Hanover tank is filled by a 15,000-bph overhead Schlagel drag and empties onto another one, which in turn feeds a 30,000-bph AGI Hi Roller enclosed belt conveyor.