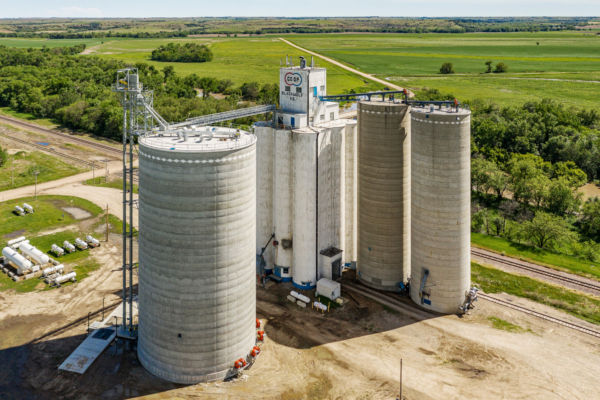 Black Wolf, KS — A new 360,000-bushel McPherson jumpform concrete tank with its own dedicated receiving pit and leg stands next to the older nearly 500,000-bushel concrete house and tanks at the Ellsworth Coop elevator in Black Wolf, KS (785-658-2697).

The tank stands as testament to the rapidly increasing yields of summer and fall crops grown in central Kansas.

“We’ve had too many turns every year at Black Wolf and, really, our other locations, as well,” says General Manager Dwight Elmore, who has been with the cooperative for four years after working for Cargill at another Kansas location.

“Black Wolf was handling our largest volume,” says Elmore. “We were shipping out 350,000 bushels a year at wheat harvest just to keep the elevator open. So the new tank was a need, not just a want.”

While the new tank is a standalone, it does connect with the main concrete house via overhead GSI-Intersystems drag conveyor. Elmore notes that the overall design was the most cost effective for the site. The jumpform concrete construction is relatively inexpensive and allows for plenty of turns. The overhead LeMar catwalk provides easy access to the new tank via an existing manlift in the main concrete house.

While the elevator site is located on a flood plain of the nearby Smoky Hill River, the facility itself has not been flood-prone, despite a deluge of rain so far in 2019. To be safe, the new tank was designed with a stem wall that elevates the flat floor 12 inches above the 100-year flood level.

“We did have to go through an approval process with all of the appropriate state and federal agencies to build on the flood plain,” Elmore notes.

To build the tank and related equipment, the cooperative chose three contractors known both for quality work and for working well together:

Unfavorable weather delayed the start of construction until September 2018. Once under way, however, the project proceeded smoothly and was completed by early May in plenty of time for wheat harvest. When Grain Journal visited the site in May, the tank addition had not yet been used but was anticipated for the 2019 harvest, which generally begins in June in that part of Kansas.

A set of eight Tiernan Aeration 25-hp centrifugal fans provide an estimated 1/5 cfm per bushel of aeration through in-floor ducting, with the assistance of eight 2-hp roof exhausters.

The leg elevates grain into a six-hole rotary Hayes & Stolz distributor. From there, grain goes either to an 18,000-bph GSI-InterSystems drag conveyor running out to the new tank or a 7,500-bph upper transfer drag conveyor to the existing concrete house. The additional holes will allow for the addition of more upright storage as needed in the future, Elmore says, and there is plenty of space for that on the Black Wolf site.

For unloading the bulk of its contents, the tank is equipped with both a gravity sidedraw truck loadout spout and lower sidedraw spout that discharges to the receiving leg. When the level of product falls lower than the sidedraw, the paddle sweep delivers grain to a 14-inch, 5,000-bph HABCO unload auger. This, in turn, delivers grain back to the receiving leg, where it can be sent back to the existing concrete house for more storage or truck loading. 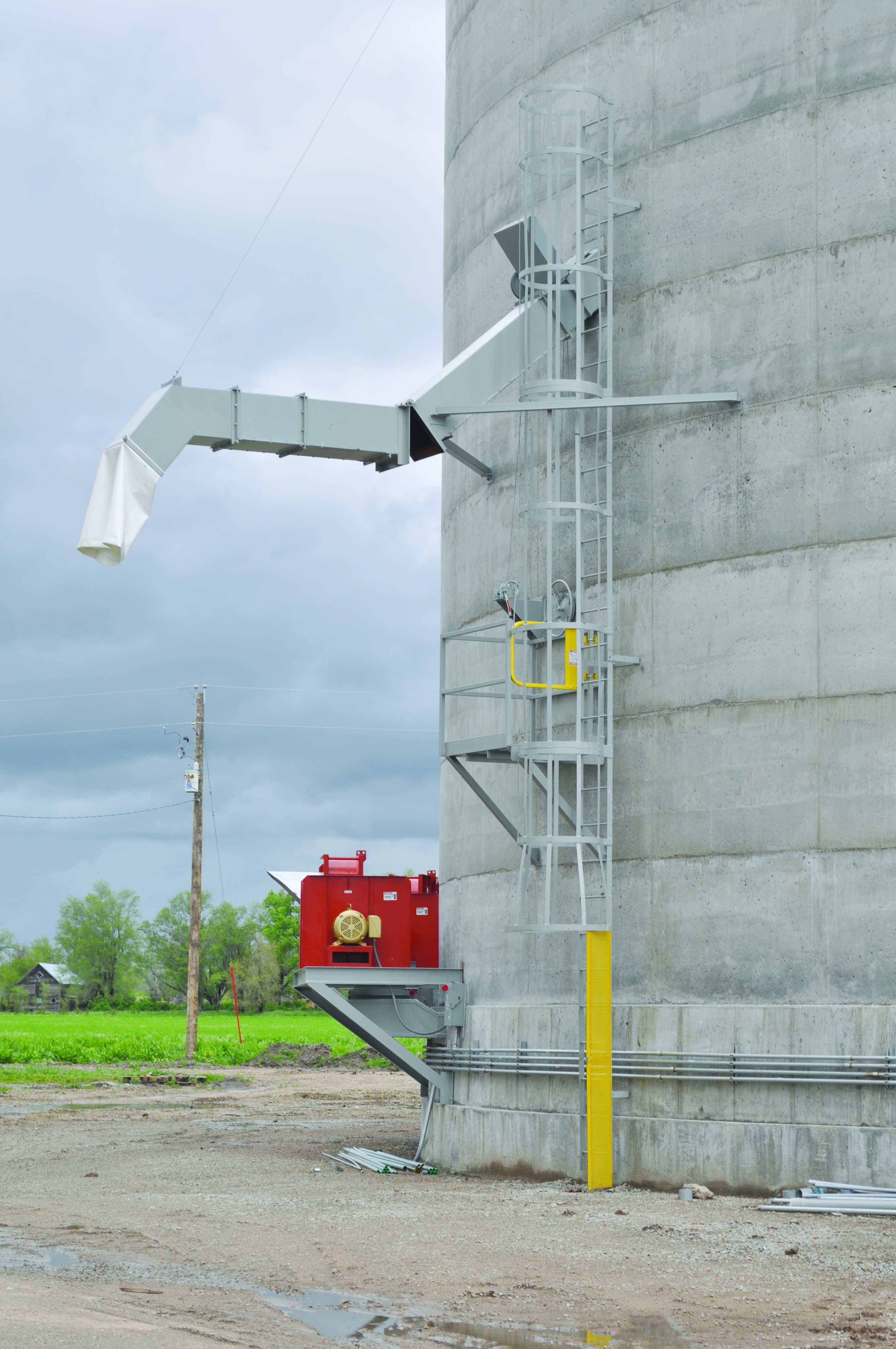 Sidedraw spout handles unloading the bulk of the grain in the new tank. Also visible is one of eight Tirenan 25-hp centrifugal aeration fans.