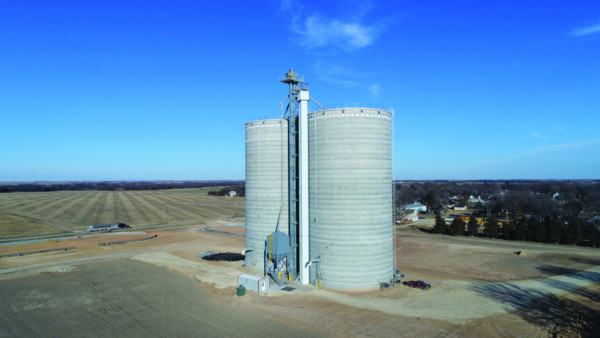 Keeping up with competition

DELPHOS, Kan. - Founded in 1901, Delphos Cooperative Association in Delphos, KS is the oldest farmer-owned cooperative in the state, according to its General Manager Steve Hoesli, who has been in that position since January 2014. And in all that time, more than a century, the company has been a single-location operation.

The State of Kansas still lists Delphos Coop that way. But there is a brand new 1-million-bushel jumpform concrete annex located about a quarter mile north of the coop’s in-town location on First Street.

“We had a lot of bunkers on the ground,” says Hoesli. “Those are always economical to build, but they are also very labor-intense to operate, and there’s always the chance for spoilage.”

In fact, Delphos Coop had been operating two bunker storage units at the site of the new annex. In 2016, the cooperative board voted to replace that with more permanent upright, jumpform concrete storage. The new site was a natural fit, since the First Street elevator was landlocked in town.

“We have two large cooperatives, one to the north and one to the south, that compete with us,” Hoesli comments. “We have very loyal membership, but we also need to keep up with the competition.”

Delphos Coop took bids and awarded a construction contract to the team of HABCO, Inc., Salina, KS (785-823-0440), which served as general contractor and millwright, and McPherson Concrete Storage Systems, McPherson, KS (800-999-8151), which constructed a pair of 502,000-bushel jumpform concrete tanks.

In addition, Precision Electric Contractors LLC, Salina (785-309-0094), did the electrical wiring and supplied automation systems for the annex.

Groundbreaking on the project, which cost a little more than $4 million, took place in fall 2016. One of the two tanks was ready to take grain in time for the 2017 wheat harvest, which usually starts in June in north central Kansas, and the other was done for fall harvest.

Incoming truckers have their vehicles weighed and loads sampled at existing facilities at the First Street elevator. At that time, they are instructed either to dump their grain at First Street or to proceed out to the annex.

At the annex, drivers deposit their grain into a single, open, 1,000-bushel mechanical receiving pit. The pit feeds grain into a 15,000-bph, 188-foot-tall Warrior receiving leg outfitted with a single row of Maxi-Lift18x8 Gray CC-MAX elevator buckets mounted on 9-1/4-inch centers on a 21-inch belt. The leg is powered by a 125-hp Baldor-Dodge motor with Dodge speed reducer.

The leg, in turn, deposits grain into a CMF, 18-inch, eight-hole TH Series distributor. The distributor, which is lined with 1/4-inch ceramic tile, either sends grain via gravity spouts directly to storage or to a 3,000-bushel FCS Mfg. surge tank and mounted over the receiving pit for truck loading.

For unloading, both tanks are equipped with two sidedraw spouts on either side. When grain drops below that level, it empties into 5,000-bph unload augers below the bin floors that carry it back to the receiving leg.

The annex also is equipped with a manlift from Sidney Mfg.

Hoesli said that the project went quickly despite a few weather-related delays, and apart from a few minor bugs right after startup, the annex has performed well.