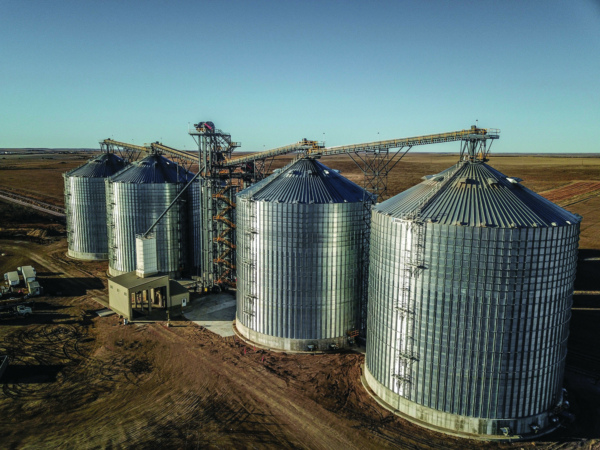 The first change was the rehabilitation of a rail line owned by the State of South Dakota and now operated by Dakota Southern Railway, a short-line connecting to the Burlington Northern Santa Fe Railway at Mitchell, SD. The work was completed as far west as Presho in 2016.

The other change is the expansion of Corn Belt-style crops westward across the Northern Plains in recent years.

To take advantage of these changes, Dakota Mill & Grain decided in 2017 to build an all-steel elevator near the terminus of the Dakota Southern. The company went with steel due to a lower cost per bushel than concrete, says Jerry Cope, vice president-marketing.

To serve as design/build contractor and millwright on the new elevator, Dakota Mill selected LandMarc Construction Inc., Hawarden, IA (712-552-1200). “In addition to a favorable bid, we saw some of LandMarc’s other projects, and their work was impressive,” says Cope.

Also with major roles on the project:

Several design considerations had to be addressed. For one, the plot of land upon which the elevator was situated could not accommodate a loop track for rail loading. Instead, says Cope, Northern Plains Rail Company constructed a 3-mile-long siding, enough to accommodate 120 railcars plus locomotives for loading from beginning to end.

Another consideration was the presence of an airport serving the Presho area. The Federal Aviation Administration limited the facility height to 158 feet. That limited the height of the legs and required the use of fill conveyors inclined at 5 to 9 degrees.

A set of six Rolfes@Boone 50-hp centrifugal fans per tank provide aeration – 1/9.5 cfm per bushel for corn and 1/16 for wheat – through in-floor ducting with help from 10 roof exhausters per tank.

In addition, LandMarc installed two Behlen 500,000-bushel oval-shaped temporary storage bunkers and one 700,000 bushel ground pile area. Both bunkers are equipped with 4-foot perforated steel sidewalls and five 7.5-hp Rolfes@Boone axial fans. Plans call for the addition of ag lime floors. The bunkers and pile are filled via a 20,000-bph Straight Line of Sanborn stacking conveyor and emptied with a DCM speed bucket mounted on an excavator.

Grain movement through the facility is designed to process trucks quickly. Most are probed, weighed, dumped, and have exited with ticket in hand within 7 minutes. The cycle begins at the Gamet Apollo probe and is followed by a pair of Cardinal 120-foot inbound and outbound scales that utilize oneWeigh automation supplied by C&A Scales. Grain samples are weighed and tested in the office building by the probe using a Perten 5200-A moisture meter, FOSS Infratec 1241 whole grain analyzer, and MCi Kicker dockage tester.

After probing and weighing, digital signage directs drivers to one of two 1,500-bushel mechanical receiving pits. These feed a pair of Schlagel 20,000-bph receiving legs. The legs are equipped with a single row of Tapco 20x8 X-treme buckets mounted on Continental 22-inch belts.

The shipping leg can deposit grain into a 40,000-bph Warrior gravity screener or bypass that directly feeds a Gamet 6800L sampler and into a 60,000-bph Warrior bulk weigh loadout scale with InterSystems controls. Workers atop railcars are protected by a Warrior trolley-type fall protection system running the length of three railcars.

Cope says that so far, the Presho facility has loaded four unit trains. 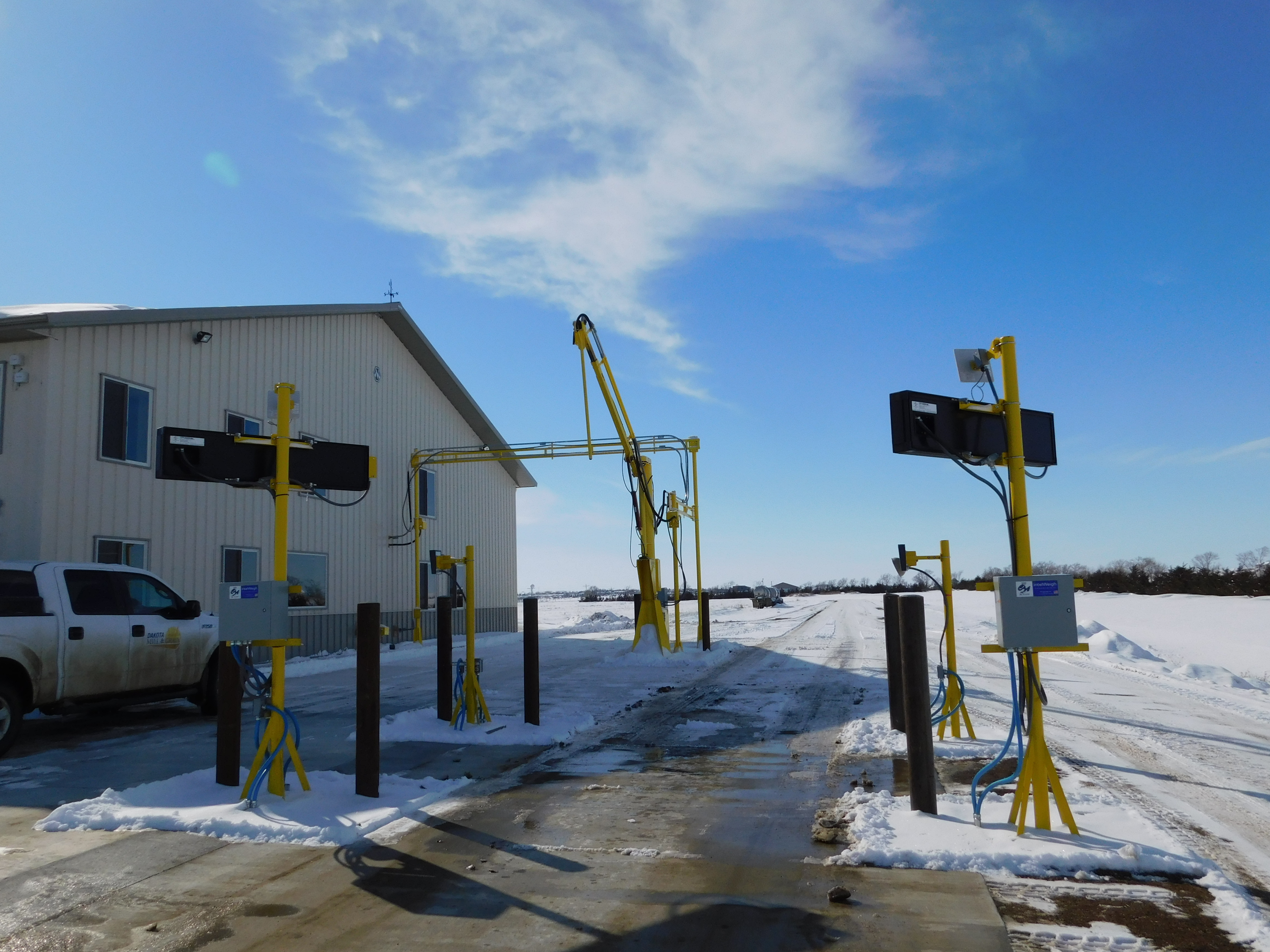 A pair of 120-foot Cardinal pitless scales under a oneWeigh scale automation system and a Gamet Apollo truck probe serve truckers entering and leaving the facility.