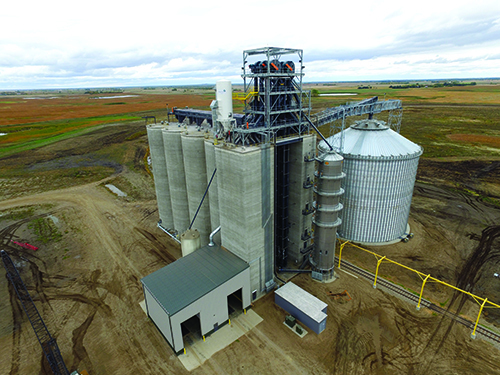 Guthrie, ND — Producers near a new rail terminal not far from Guthrie, ND (701-465-3900) had been hauling their grain and oilseed crops 30 miles or more to get rail services.

Area farmer-customers of Dakota Midland Grain LLC were having to go to the company’s terminal at Voltaire (25 miles west) or to other locations outside of the cooperative, at least 30 miles to the east to deliver grain.

The cooperative decided in 2016 to construct its new terminal on a 125-acre site along State Highway 14, a well-traveled paved road, with access to a Burlington Northern Santa Fe (BNSF) branch line. That branch connects to a BNSF main line for shipping grain east to the Twin Cities or west to the Pacific Northwest ports.

The new terminal, which began receiving grain in 2017, has 1.88 million bushels in upright storage, both slipform concrete and steel. It also includes a 7,800-foot loop track that can accommodate up to 125 railcars. It was built for an undisclosed sum.

Also participating in the project:

The eight big tanks hold 103,000 bushels, each standing 38 feet in diameter and 120 feet tall. They are outfitted with North American Equipment KanalSystem air-assisted unloading floors. The KanalSystem is powered by a set of eight AGI Airlanco 60-hp centrifugal fans delivering 1/12 cfm per bushel when used for aeration purposes. The Kanal floors eliminate the need for sweep augers in the concrete.

The GSI steel tank stands 105 feet in diameter, 96 feet tall at the eave, and 120 feet tall at the peak. This flat-bottom tank does have a 16-inch GSI sweep auger, as well as outside stiffeners, eight-cable BinMaster temperature monitoring system, and BinMaster level monitoring.

A set of four GSI 60-hp centrifugal fans provide 1/9 cfm per bushel of aeration through in-floor ducting in a double-L pattern, with the assistance of eight roof exhausters.

Trucks are routed to one of two enclosed mechanical receiving pits holding 900 bushels each. The pits feed a pair of Schlagel 22,500-bph legs equipped with 24x10 heavy-duty buckets mounted on a 26-inch Continental belt. Dakota Midland chose to equip different legs with Tapco or Maxi-Lift buckets to see which holds up better under heavy use, and the company plans to test 4B buckets, as well. (No final results are in as of yet.)

Legs deposit grain into two Schlagel distributors. From there, grain is conveyed via 22,500-bph Schlagel drag conveyors to concrete storage or via a 50,000-bph overhead Hi Roller enclosed belt conveyor out to the steel tank.

Storage tanks empty onto a set of Hi Roller 50,000-bph enclosed belts in below-ground tunnels. These convey grain to a Schlagel 50,000-bph shipping leg outfitted with two rows of 20x8 buckets on a 44-inch Continental belt.

The shipping leg plus four other legs can deposit grain into an 80,000-bph bulkweigher fabricated by Vigen and under the control of a CompuWeigh CD-4000 automation system that includes a SmartRead railcar tag reader. Workers atop railcars wear lanyards that connect to a trolley-type fall protection system, also fabricated by Vigen.

The terminal typically will load a 110-car shuttle train in less than seven hours. BNSF requires a maximum 15 or 24 hours to load a train, depending on its size.

Operators have the option of running grain through a 12,000-bph Cimbria Mega cleaner and/or a GSI/InterSystems screener prior to loadout.

The facility also includes a 4,750-bph Zimmerman tower dryer utilizing liquid propane run through a vaporizer prior to use. 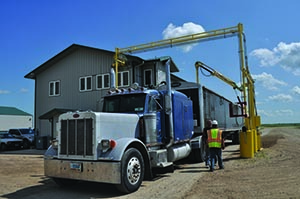 Incoming grain truck is sampled using a Gamet Apollo truck probe adjacent to the facility office and grain lab prior to weighing.