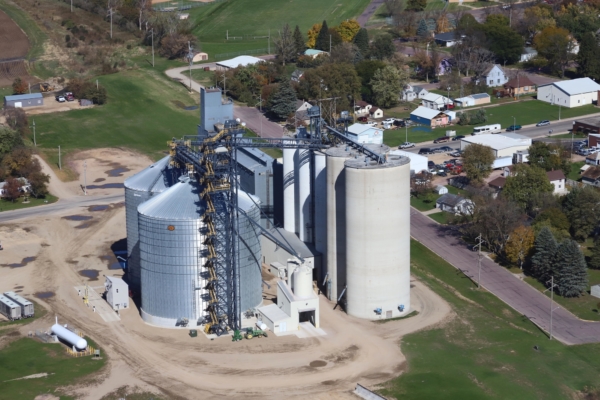 TRIMONT, Min. - The Crystal Valley Cooperative grain elevator on the edge of Trimont, MN (population 747 in south central Minnesota) has been a town landmark since the early 1960s, when the facility’s large wood house was built. Some concrete and steel tanks were added later.

“Our biggest motivation was to improve on speed and capacity,” says Location Manager Brian “Bush” Krumwiede (507-639-2031), who has held that position since the beginning of 2017. “We had an old dryer that had served us well, but it was becoming a bottleneck. We had only one truck scale ahead of one pit and leg.

“We also looked at our space needs, and we felt that more storage space would keep us from having to pile grain on the ground, given the volumes we were handling.”

Crystal Valley hired CEEC Inc., Wabasso, MN (507-342-2383), to serve as contractor and millwright on the project. Krumwiede notes that CEEC is no stranger to Crystal Valley, having built a rail loading terminal for the cooperative in Hope, MN.

Construction began in the spring of 2017 and was completed in late September 2017, in time for harvest.

A set of four Rolfes@Boone 40-hp centrifugal fans with silencers provide 1/10 cfm per bushel of aeration through in-floor ducting with the assistance of 11 roof exhausters.

The project also included installation of a pair of Rice Lake pit-type 80-foot inbound and outbound truck scales, which have no automation system yet. Ahead of the scale, a Gamet Apollo truck probe takes samples and sends them to the grain lab inside the office building, where they are tested with a Perten AM5200-A UGMA moisture meter for moisture, test weight, and temperature, and a MCi Kicker grain tester to sift dockage, broken/shrunken/split kernels, and FM.

Trucks then are routed to one of three receiving pits. One of the three is new, a 1,000-bushel enclosed mechanical pit feeding a 20,000-bph S-M leg outfitted with a single row of 18x8 Maxi-Lift Tiger-Tuff low-profile buckets on a 20-inch Continental belt. The leg is encased in a Warrior 16-foot-x-16-foot tower with switchback stairs.

The leg deposits grain into a Schlagel Synchroset six-duct rotary distributor. From there, grain runs out to storage via overhead 20,000-bph S-M drag conveyors. The tanks empty onto 10,000-bph S-M drags in above-ground tunnels, which take grain back to the new leg. Trucks are loaded inside the receiving shed via a 5,000-bushel Meridian surge tank reached by gravity spout from the distributor.