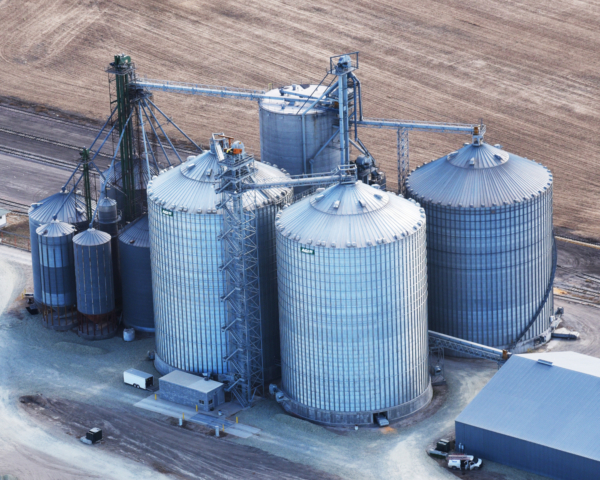 More storage capacity and improved automation – those were the goals for Cooperative Producers, Inc. (CPI) in two expansion projects in 2020 at rail-loading elevators in Red Cloud and Fairmont, NE.

“We needed more space and speed,” he says. “We especially wanted to improve our flexibility by being able to have enough commodities on hand to load a train whenever one shows up.”

It takes about 440,000 bushels of corn or soybeans to load a 110-car unit train on the Burlington Northern Santa Fe (BNSF) Railway, which serves the Red Cloud facility.

To address that need, CPI spent about $8 million adding a pair of 620,000-bushel corrugated steel tanks, as well as a new receiving pit and 20,000-bph leg between the two tanks.

Six Tanks Torn Down to Make Room in 2019

To make room for the expansion, the coop tore down six small, older tanks on the site in the fall of 2019. The addition was ready in time for the 2020 fall harvest.

At the Fairmont terminal, also served by the BNSF, the extra storage also was welcome, but the 710,000-bushel corrugated steel tank added there had been planned as the last tank when the facility was constructed in 2012-13.

One portion of the $4 million project at Fairmont, Yoesel says, went into upgrading automation systems at the facility with a system from Kasa Controls & Automation, Salina, KS (785-825-7181).

“We had another system at Fairmont, but our operators were so thrilled with what they saw with Kasa, which we already had at Red Cloud, that we decided to switch over at Fairmont,” Yoesel says.

Handling both projects as general contractor and millwright was PMI Nebraska L.L.C., Grand Island, NE (308-382-5454), which was awarded the contracts after a bidding process. “They’re local, and their crews have enough depth that we can count on them to be on time,” says Yoesel.

The original cooperatives that now make up CPI date back as far as 1910. CPI itself was formed in 2007 through the merger of the former Heartland and Midland cooperatives.

Altogether, CPI operates 23 grain locations throughout south central Nebraska. In addition to the rail terminals on the BNSF at Red Cloud and Fairmont, CPI loads trains at Funk on the BNSF, Hayland on the Union Pacific, and at Hastings with access to both railroads. Hastings is the cooperative’s headquarters.

CPI has become a major supplier of grain to China. Its trainloads are shipped all over North America, particularly to the Texas Gulf, California, and Mexico.

CPI added 1.24 million bushels of storage at Red Cloud consisting of a pair of 620,000-bushel AGI corrugated steel tanks. These tanks stand 90 feet in diameter, 90 feet 8 inches tall at the eaves, and 114 feet 6 inches tall at the peaks.

In between the two tanks is a new 800-bushel mechanical receiving pit, the facility’s third. The pit feeds a 20,000-bph GSI receiving leg outfitted with 20x8 Maxi-Lift CC-MAX buckets mounted on a 22-inch Continental belt. The leg is enclosed in a 14-foot-x-14-foot-x-157-foot LeMar support tower.

The leg deposits grain into a Schlagel four-duct swing-type distributor. From there, it travels via GSI 20,000-bph overhead drag conveyors out to the new storage. The new tanks empty onto above-ground GSI 50,000-bph enclosed belt conveyors running out to rail loadout. The operator has the option of running grain through two new 30,000-bph Ferrell-Ross Roll Mfg. scalpers ahead of an existing 50,000-bph GSI InterSystems bulkweigher.

The new Kasa automation system is designed to operate the entire terminal from any facility workstation. The system monitors equipment performance, maintains performance records, and alerts the operator in the event of a malfunction.