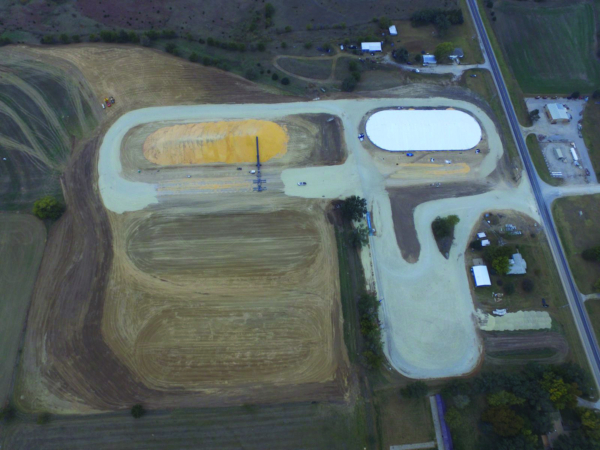 Two of the four planned temporary storage systems on an 81-acre site west of Concordia, KS serving as a spillover facility to the Concordia terminal LLC rail loading facility 1/4 mile to the east.

Since the former AgMark L.L.C., a joint venture of four Kansas cooperatives, built a rail terminal along the Burlington Northern Santa Fe Railway (BNSF) in Concordia, KS in 1999, either upright or temporary ground storage has been added almost every year. Yet it hasn’t kept up with volume.

“Last year, we loaded 87 unit trains (114 cars each), and we could barely keep up,” says Mark Paul, general manager at Cloud County Coop Elevator Association based in Concordia. (Today, Cloud County is the lead partner at the 10.5-million-bushel Concordia Terminal, with 64% ownership. The other two partners are Central Valley Ag and Randall Farmers Coop Union.)

“We are dedicated to taking care of our customers,” Paul says. “Without more places to put the crop, we would have to shut down and stop receiving grain. We were actually the number one inland grain shipper on the BNSF in 2019.”

Cloud County Coop came up with a solution by purchasing an 81-acre plot of farmland about a quarter mile west of the terminal along State Highway 9. To create as much storage capacity on this ground as possible, the coop is building five ground piles – four temporary bunkers and an emergency pile with a total storage capacity of 3.4 million bushels.

When Grain Journal visited Oct. 12, the first temporary pile was completed, filled with corn, and ready to be tarped. A second emergency storage pile, without sidewalls or improved floor containing 600,000 bushels, was being filled.

The first bunker is oval-shaped standing 150 wide by 365 feet long. The floor is a mix of dirt and fly ash. It has 4-foot LeMar sidewalls and seven Brock 7-1/2-hp axial fans delivering 1/7 cfm per bushel. Aeration piping extends both underneath and over the top of the grain, a setup designed to reduce condensation problems.

The bunker was filled using a 25,000-bph LeMar portable belt conveyor with double drive-over receiving pits. It will be emptied onto trucks by front-end loaders.