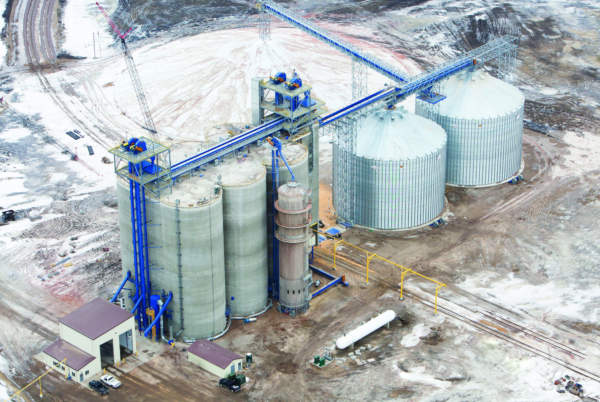 “This actually came out of the merger talks,” says Dan Olson, assistant general manager at the new terminal in Gwinner, ND (701-678-7220). Olson originally joined Farmers Union Cooperative, one of the entities that eventually made up CHS/Dakota Plains Ag, in 1994.

“CHS/Dakota Ag wanted to expand its territory to the west,” Olson continues. “At CHS/Dakota Plains, we wanted a new fertilizer plant. After a while, it became clear that the best course of action was to combine the two business units and use the combined resources to build both.”

East of Gwinner a natural fit for big grain operation

Construction on the grain and fertilizer complex began shortly after the merger took effect, in May 2015 at a cost somewhat over $32 million.

The location, on the north side of State Highway 13 a mile east of Gwinner, was especially a natural fit for a big grain operation. There was plenty of space to build and expand in the future, it was close to two well-traveled and well-maintained roads (the other being State Highway 32), and the site had access to the Red River Valley and Western Railroad, a regional feeder for the Burlington Northern Santa Fe.

The CHS Construction Department, Inver Grove Heights, MN (970-630-0335), served as design and construction manager on the project. The CHS team did facility and flow design and developed a contractor procurement request for taking bids.

After the bids were in, CHS/Dakota Plains Ag selected Vigen Construction, Inc., East Grand Forks, MN (218-773-1159), as general contractor and millwright on the project.

“We looked at the proposals we received and liked Vigen’s the best,” says Olson.

Among the other players on the project:

Groundbreaking took place on May 15, 2015. The nearly finished terminal began receiving grain in September 2016 and began loading 120-car shuttle trains during the second week of October.

When Grain Journal visited the site in mid-January 2017, Vigen was still on-site finishing up some last minute details, but for all intents and purposes, the terminal elevator and its loop track was fully operational.

“We originally looked at a concrete ‘eight-pack’ for the elevator,” Olson explains, “but Vigen showed us that a concrete six-pack plus two steel tanks was a more cost-effective approach.”

The big concrete tanks also are equipped with AIRLANCO air-assisted unloading floors with center sumps. These are powered by a 50-hp AIRLANCO centrifugal fan per tank capable of supplying 1/11 cfm per bushel for aeration purposes with the assistance of two roof exhausters per tank.

The site also includes a single 1.6-million-bushel LeMar temporary storage pile bounded by a 3-1/2-foot tall perforated steel sidewall 360 feet in diameter and an agri-lime floor. A set of 12 GSI 7 1/2-hp axial fans draw air through 24-inch perforated pipe to aerate the pile and hold a tarp in place. The pile is fill from the center via an overhead 30,000-bph Hi Roller enclosed belt conveyor, and it’s emptied using front-end loaders.

Trucks are routed through the Gwinner site using a oneWeigh™ Cultura Technologies system based on data from RFID tags issued to drivers.

Incoming trucks are weighed on an 80-foot Rice Lake pitless scale and sampled with a Gamet probe. Once the sample is weighed and graded, drivers are routed to one of three 1,000-bushel receiving pits, two of which are located in a two-bay steel shed.

The third truck pit is located next to the facility’s 12,180-foot loop track, part of which is a double track spur. The double track allows Dakota Plains Ag to bring in smaller 25-car trains and transship them through a rail pit at 60,000 bph to 120-car unit trains on the main loop. At the same time, the third truck pit empties onto a 30,000-bph reclaim belt.

The mechanical pits feed a pair of Hi Roller 20,000-bph enclosed belt conveyors, which feed a pair of GSI 20,000-bph legs outfitted with a single row of 20x8 Tapco HD low-profile buckets mounted on 7-1/2-inch centers on a 22-inch belt.

The Gwinner terminal uses no distributor but instead relies on a two-way valve going into the end bin or to the 20,000-bph overhead Hi Roller belt conveyor and GSI drag conveyors. This reduces the overall height of the elevator to less than 178 feet, which is required due to the proximity of Gwinner Municipal Airfield. Grain can be routed through one of two 20,000-bph InterSystems gravity screeners, one for each receiving leg, prior to storage.

Grain from two 30,000-bph loadout legs can be routed through two 40,000-bph InterSystems gravity screeners mounted above an 80,000-bph Vigen bulkweigher with components form Meier Sales and Engineering and software supplied by C&A Scales. It is housed for protection from the weather inside the concrete slip.

The bulkweigher, under the control of oneWeigh software, has been used to load shuttle trains in nine hours, though the goal is to reduce that to seven. During train loading, workers atop railcars are connected to a 325-foot Fall Protection Systems trolley unit.

The site also includes a 7,500-bph Zimmerman tower dryer fired by propane. The dryer is serviced by a 12,000-bph GSI wet leg. During its first year of operation, Olson says, nearly 4 million bushels of grain were routed through the new dryer. 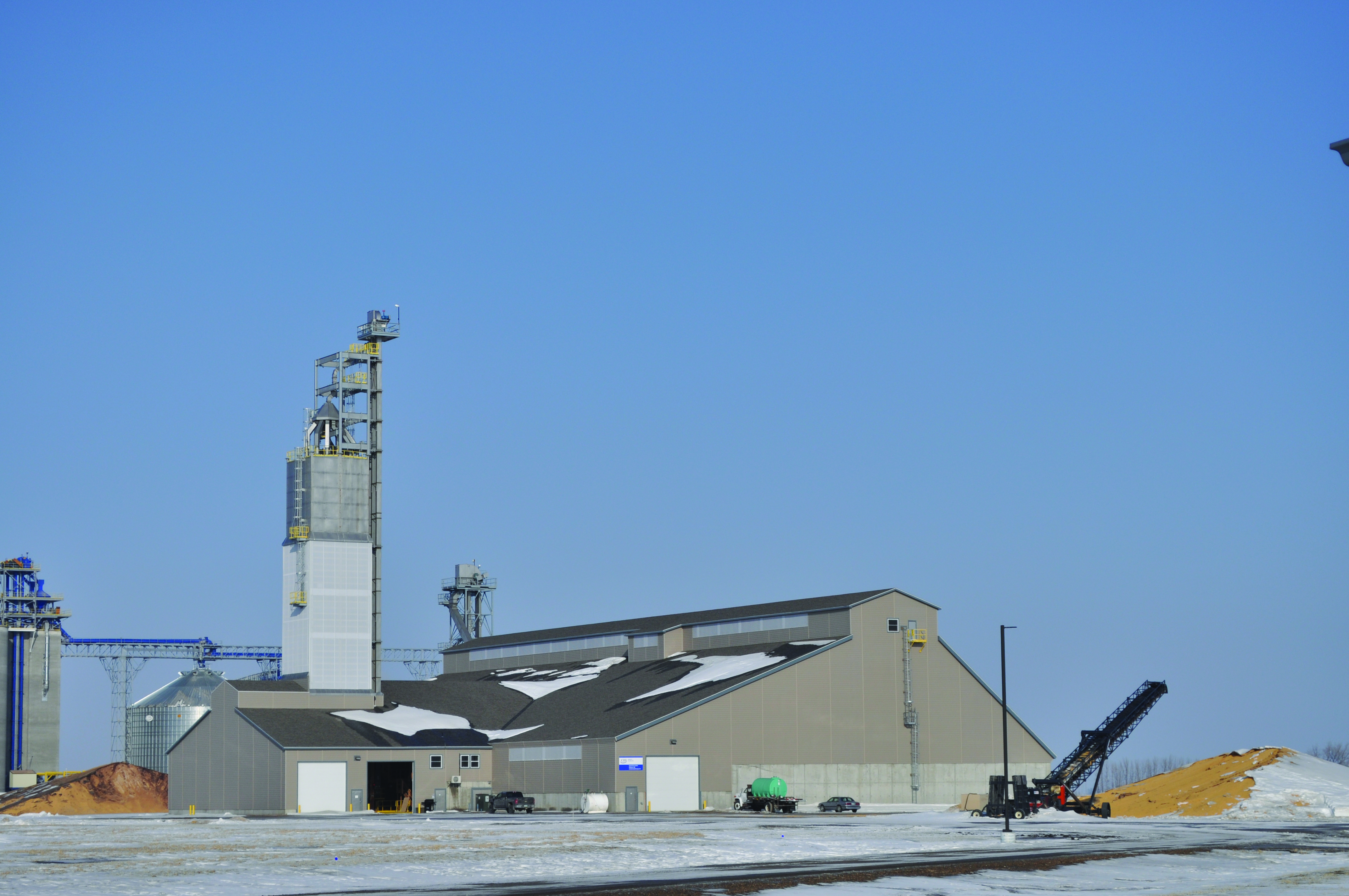