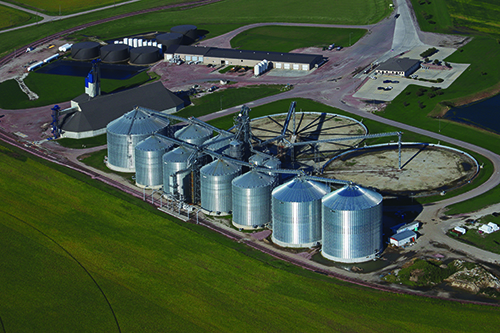 Oakland, NE — Central Valley Ag’s (CVA) rail terminal near Oakland, NE on the Burlington Northern Santa Fe Railway had nearly 10 million bushels of storage space at the start of 2019. But half of that capacity was in temporary storage piles.

“We’re just trying to get more bushels under roof,” says Location Manager Rob Lindberg, who has been at Oakland for 26 years, long before CVA built the terminal in 2006-07.

“We needed one to be taller than the other to build the fill conveyors above existing structures,” Lindberg says.

The contractor and millwright on the project was J&D Construction Inc., Montevideo, MN (320-226-2336). J&D has done numerous projects for CVA, most recently a new all-steel rail terminal at Linn, KS (covered in the March/April 2019 issue of Grain Journal).

Construction began in March 2019 and was completed around Oct. 1.

The larger of the two tanks stands 105 feet in diameter, 92 feet tall at the eave, and 121 feet tall at the peak. It has outside stiffeners, flat floor, a 16-inch Springland sweep auger, and 24-cable TSGC grain temperature monitoring system and level indicators. Four 40-hp AGI Airlanco centrifugal fans supply 1/8 cfm per bushel of aeration.

The tanks are filled by a set of AGI Hi Roller 30,000-bph enclosed belt conveyors. Neither tank has sidedraws but instead empty onto another set of 50,000-bph AGI Hi Rollers in an above-ground tunnel.