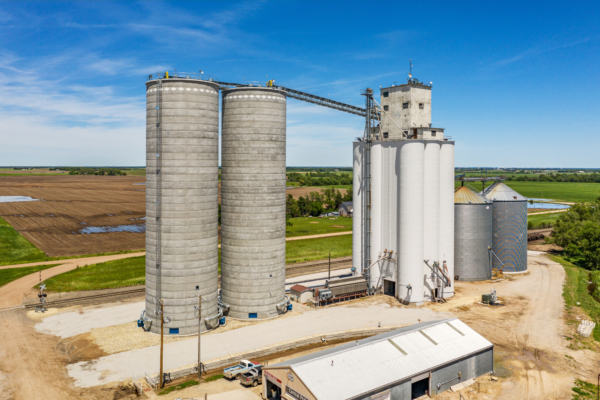 Partridge, KS - When Grain Journal visited Central Prairie Co-op’s branch elevator in Partridge, KS (620-567-2345), the skies were threatening more rain, which south central Kansas did not need. A lot of streams were out of their banks, and several major roads in the area were closed.

It was part of a larger weather pattern all spring that saw levees breached up and down the Missouri, Mississippi, and Illinois valleys and tributary streams, flooding farmland, roads, and rail lines and shutting down much of the rivers to barge traffic.

At Partridge, says Plant Manager Cliff Taggart, the need to alleviate flooding problems affected the design of a 318,640-bushel jumpform concrete addition in 2018, prior to planned site work in 2019 to stop flooding on its site in a town of about 250 southwest of Hutchinson, KS.

The two 159,320-bushel McPherson tanks were already a little unusual in the area for their dimensions, only 40 feet in diameter and 140 feet tall, thanks to limited space in which to build at the coop’s in-town location.

In addition, the coop opted to build atop a 14-foot-deep cone-shaped floor supported by 40-foot-deep auger cast pilings. That design is popular in western Kansas to add bushel capacity where the weather is dry and water tables are low. In Partridge, however, water tables are high, especially in a spring as wet as 2019, and the cone bottoms, situated right above the water table, are more efficient for spreading the tanks’ weight on less-than-favorable soil conditions.

“We started Sept. 1, 2018 and completed the foundation work during harvest,” says Taggart, who adds that the tanks were usable for the 2019 wheat harvest.

Prior to the start of construction, the coop took bids and selected HABCO Inc., Salina, KS (785-923-0440), as general contractor and millwright. “We’ve always liked the quality of their work,” says Taggart.

As mentioned, the two new McPherson jumpform concrete tanks are 40 feet in diameter and 140 feet tall.

Each is equipped with a five-cable grain temperature monitoring system from Rolfes@Boone. The data from the system is broadcast via radio to the facility office, where managers can call up the information on computer screens without having to leave their desks. The tanks also have high-level sensors from Monitor Technologies.

The tanks are aerated at 1/10 cfm per bushel on corn with a pair of AGI Airlanco 50-hp centrifugal fans per tank with two roof exhausters on each. The aeration system ducting includes two-way fittings that allow a FrigorTec GRANIFRIGORTM air conditioning unit to be connected for cooling grain in the summer and early fall to prevent the need for fumigation and prevent shrink.

The tanks are filled via 13,500-bph Schlagel drag conveyors that receive grain from the slipform house and outside receiving legs.

The tanks are emptied most of the way through truck-filling sidedraw spouts on the north side. Once the level of grain drops below the sidedraws, the tanks are emptied the rest of the way through HABCO-fabricated augers that rise above the ground on an angle that discharges to the 7,500-bph reclaim system to the main house and outside receiving legs.

Central Prairie also had a number of other items done around the Partridge elevator in 2018-19: