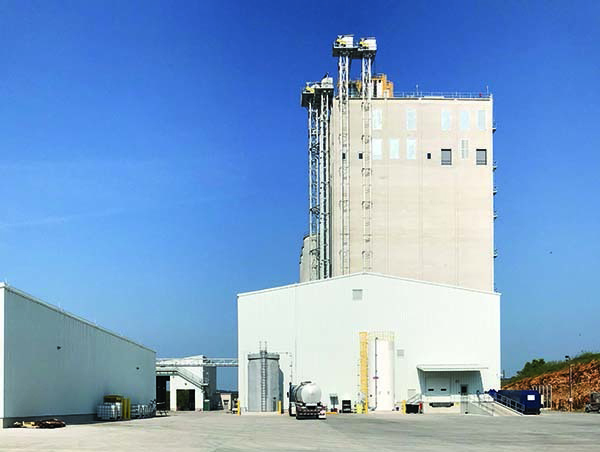 Yellville, AR — Butterball, LLC, the iconic turkey producer, had been supplying feed to its growers in north central Arkansas from two older steel feed mills, one in Mountain Home built in 1966 and the other in Green Forest built in 1987.

The privately held company had another more up-to-date mill in Ozark, AR, “but that’s two hours away over the mountains. The freight cost would be prohibitive,” says Dr. Vernon Felts, senior director of live production.

Instead, Butterball decided to consolidate the two steel mills into a single large slipform concrete mill. The nearly $50 million mill produces up to 12,000 tpw of turkey feeds.

Siting the mill was a challenge, not the least of which was finding enough flat ground to build a feed mill in the Ozarks. Butterball was able to obtain a site in Yellville, AR, with utilities, good highway access, and access to the Missouri & Northern Arkansas Railroad, a short-line with connections to three Class I lines. Rail access is important, since few row crops are grown locally in the mountainous region, Felts says. Corn mostly is railed in from the Midwest.

The company hired WL Port-Land Systems Inc., Pittsburgh, PA (412-344-1408), as the design-build contractor. “We have a long history with them on projects large and small,” says Felts.

Repete Corp., Sussex, WI (262-246-4541), supplied its FLX automation system which is customizeable from receiving to loadout.

Groundbreaking occurred in December 2017 followed by six months of significant sitework. Structure crews mobilized in June 2018; the two slipforms were finished in the fall of 2018; and feed production started in March 2020.

The mill receives at 32,000 bph through two receiving pits, one for truck and the other for both rail and truck. Butterball specifies that corn be cleaned at origin.

Corn is ground on a pair of Bliss 500-hp fine-grind hammermills at an average 65 tph before being elevated into ingredient bins.

The plant includes three feed milling lines, one of which is segregated strictly for organic or certain specialized ingredients to prevent cross-contamination.

All feeds are pelleted at Yellville on three CPM Model 9042 pellet mills rated at 45 tph. A pair of Cleaver Brooks 500-hp boilers supply steam for pelleting operations. Pellets are processed further through Bliss counterflow coolers, and poult feeds are prepared in a Bliss crumbler.