For Portsmouth, VA-based Arreff Terminals (757-393-6534), exporting animal proteins, vegetable proteins, and whole grains across the world comprises 99% of its business, so it’s necessary for the company to stay on the cutting edge of efficiency.

That was the impetus for building a new $3 million transload facility – Arreff’s fifth – that opened in April at the Port of Norfolk, VA. According to Bob Delorme, chief operating officer, “We really want to be as cost-competitive as possible, so in 2018 we began looking at ways to upgrade our company operations and equipment. We also wanted to improve our ease of compliance with Occupational Safety and Health Administration and Food Safety and Modernization Act requirements.”

In 2018, to get closer to the Port of Norfolk, Arreff Terminals entered into a long-term lease on a 4.5-acre vacant lot with the intention of rehabilitating an existing rail spur and installing transloading equipment. During a November interview with Grain Journal, Delorme said that the site’s irregular shape and small footprint created a unique design challenge.

Tasked with handling that challenge was contractor and millwright TAM Systems, Dillsburg, PA (717-432-9738). “A while back, TAM Systems installed equipment at a facility we operate in North Carolina, and we liked the way they do business” says Delorme.

TAM Systems designed and built a unique loading system with twin 11-inch container-stuffing augers. According to Delorme, “Once we install a second rail spur in 2021, we will be able to maximize the transloading equipment’s capability of loading 40-foot ocean containers.

When one container is full, we toggle the product flow to the other auger, while we swap out the full container for an empty one.”

Arreff, which was founded in 1985, operates five other transload facilities in the United States:

Other major contractors on the project were:

Incoming railcars are unloaded onto a 10,000-bph Essmueller Hi-Flite drag conveyor, which moves product to a Honeyville bucket elevator equipped with 16x8 4B Components CC-S low-profile buckets, plus bearing and motion sensors.

The leg feeds a 10,000-bph C&A Scale bulkweigher, which sends product out a Essmueller drag conveyor to deliver the exact weight programmed for each shipping container or truck in the two stuffing stations.

An Essmueller reversing drag conveyor equipped with LCDM pneumatic slide gates runs between the two loadout lines to fill one of the two container-stuffing augers, which are manufactured by C&A Scale to allow for loading stationary containers/trucks without needing to pull forward during the filling process.

Filled containers then are loaded onto oceangoing vessels at the nearby pier. “We do business with all of the major carriers,” adds Delorme, who is pleased with how the facility has operated since it opened in April.

“While business has been affected by COVID-19, we expect volume to pick up significantly in 2021, especially once we have the second rail spur installed.” Once fully operational, the facility will have 18 full-time employees.

From the November/December 2020 Grain Journal 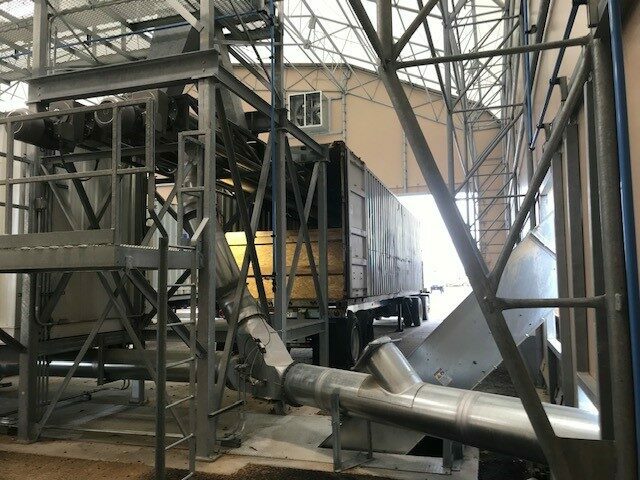