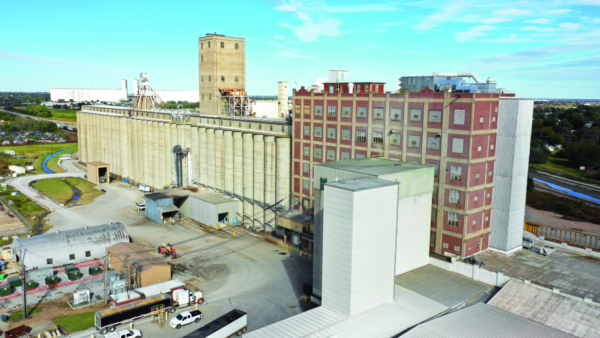 Mill is retrofitted for full automation and pneumatic systems

Enid, OK — In 2017, ADM Milling Company had a state-of-the-art flour mill in Enid, OK – that is, state-of-the-art for 1928. That’s the year the mill now operated by ADM Milling was built in the northeast part of the city. The main mill, with two milling units eventually rated at 7,500 cwts. per day each, would have been a museum piece if it hadn’t been producing actual flour – belt-driven roller mills and other milling equipment and numerous bucket elevators lifting product for multiple passes through that equipment.

“Over the years, we installed more up-to-date rollstands and added a little automation here and there, but that’s about it,” says Mike Wiechman, process improvement manager for ADM Milling. (A Kansas State University graduate in milling science, Wiechman has spent 30 years with ADM Milling in various capacities.)

ADM Milling acquired the Enid mill in 1993 from The Pillsbury Co. Almost all of the mill’s production today is bulk flour for bakers throughout the United States.

In the summer of 2017, ADM Milling announced what it called a “complete retrofit of the mill. This involved completely tearing out the two old mills and replacing them with a single modern 15,000-cwt. mill, with full automation and a pneumatic system for transporting product. In addition to the two old 7,500-cwt. mills, the plant also housed a relatively new 3,000-cwt. whole wheat mill, which was not part of the project.

With the retrofit taking about 13 months from the time of the announcement, ADM Milling began test runs of the new equipment in September 2018. The company held a public ribbon cutting ceremony with tours of the new mill on Oct. 3. Participants in the ribbon-cutting included Oklahoma Gov. Mary Fallin, Oklahoma Secretary of Agriculture Jim Reese, and Enid Mayor Bill Shewey.

John Dick, commercial manager for the Enid mill and 1997 milling science graduate of Kansas State University, told Milling Journal that ADM Milling did look at expanding at other locations or building a new mill, as any large manufacturer would as part of due diligence. But it came down to staying put in Enid and doing a retrofit in the existing structure.

“We had a good, solid physical structure right here,” says Dick. “We had a 2.5-million-bushel slipform concrete grain elevator that’s in good shape. And we’re in the heart of wheat country, with a lot of dedicated producers. Hard red winter wheat still predominates here, unlike some other parts of the country.”

ADM Milling also had made significant contributions to the community, Dick adds. For example, it helps support Loaves and Fishes, a food bank serving the needy across northwest Oklahoma, as well as other grants designed to reduce food insecurity.

During the ribbon-cutting ceremony Oct. 3, Agriculture Secretary Jim Reese said that financing the retrofit served as a catalyst to bring several levels of government throughout the community together. (ADM Milling is keeping the exact dollar figure confidential.)

The main vehicle for encouraging investment in Enid was to create a tax increment financing district. Under that arrangement, area county and local governments defer receiving property tax payments from ADM Milling for a certain number of years, while the company uses the savings to offset some of the construction costs. In addition to city and county governments, area school districts and park districts signed onto the TIF.

Another contributor making the project possible was Oklahoma Gas & Electric (OG&E), the power company serving the Enid area. State and local governments worked with the utility to install a new 7.5-million-volt substation next to the mill.

“That by itself enabled us to take the mill off the city electrical grid,” says John Dick, “providing the operation with a source of clean electrical power without draining away electricity from the rest of the city.”

Supplying the automation system and all of the mill’s pneumatic equipment was Kice Industries Inc., Wichita, KS (316-744-7151).

Engineering staff from CETEC and ADM Milling collaborated in designing an Ocrim-based flow sheet for equipment running throughout the mill’s seven stories.

The cleaning house uses all Ocrim equipment with the exception of a Cimbria color sorter, which removes off-grade wheat from the product flow.

The incoming product flow also is run through a grain separator to remove impurities by size and aspiration to remove light impurities in the wheat. The wheat then goes through Cimbria color sorters and additional aspiration before tempering.

Mike Wiechman comments that reconfiguring the temper system will allow the plant to utilize a near 24-hour temper time that was not achievable in the old layout.

After tempering, grain takes a pass through an Ocrim scourer-aspirator before entering the break process.

The mill is equipped with 32 Ocrim rollstands spread across two floors, including nine double-high and 23 single-high. First and second break, as well as fourth and fifth break, are accomplished on the double-high rollstands.

The mill has plenty of sifting capacity with a set of five 10-section and one 4-section Ocrim sifters. In addition, flour is run through a series of eight Ocrim purifiers.

The process is completed with bran finishers, impact detachers, and infestation destroyers. The bran fraction is sent to produce millfeed marketed to feed mills in the area.

Work is not yet complete at Enid. Plans call for the installation of a PremierTech packing line sometime during the first quarter of 2019. Wiechman notes that the new packing line will enable the mill to turn out 25-lb. and 50-lb. bags, in addition to the 5-lb. bags that were produced on a separate family flour packaging line.

Elsewhere around the company, work is nearing completion this fall on a new ADM Milling flour mill near Mendota, IL, which will be rated at 30,000 cwts. per day. This new mill will replace a 13,700-cwt. flour mill in Chicago, IL. The Mendota mill is expected to become operational sometime early in 2019.